Do you use any “hacks” with Gig Performer?

[1] I saw what hack was Ray Myers doing in the latest stream here. This allowed him to speed up the loading time of his gig files. Update: his final solution is presented in this post.

[2] How to create rackspaces if you have no rig attached to your computer? → LINK

[5] How to see all rackspaces for a plugin → LINK

Tried the suggestion in the video (20min :56secs) regarding load times and it really does work!!! Cut my loading of 57 rack spaces from 4 and a half mins to around 50 seconds! Thank you!!!

and it really does work!!!

Thank you for checking! If it didn’t work, I wouldn’t have included it!

Here is another one: How to create rackspaces if you have no rig attached to your computer?
Solution: Use virtual MIDI devices!

Mac users have the built-in support of this called IAC port. You can define as many as you want on your Mac and Gig Performer will recognize them as separate ports: 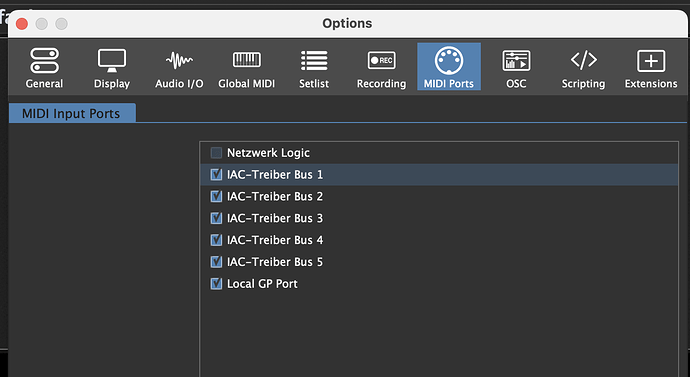 (explanation: “Treiber” is a German word and means “driver”).

You can use these ports in the Rig Manager: 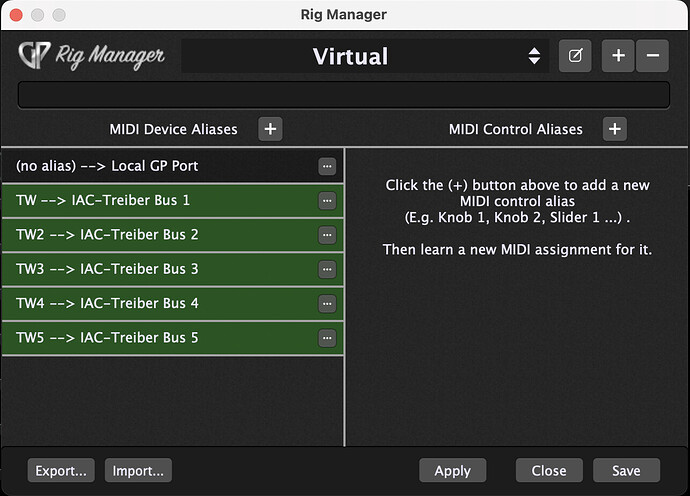 Windows users need to download a third-party virtual MIDI driver, such as LoopMIDI (it works great).

There were a couple of questions about this trick, for example, here, here, and here.

Of course, don’t use MIDI In (OMNI) ports (learn why).

Another thread worth checking out: MIDI Input organization.

I possibly jumped the gun a little with the testing. Does it load the gig file in around 50secs? = yes! Excellent! Huge time saver! But what I then find after disabling predictive loading is that selecting some songs are immediate (perfect!) but other songs take anything from 2 to 10 secs to load with the GP appearing to hang with the spinning cursor. This occurs on 2 separate laptops. Trying to work out if the songs that have been loaded ‘predictively’ are loading immediately and the others are taking longer to load.

I would think there must be some tradeoff. Basically I would think you are doing an initial load based on predictive loading. So, you can’t be loading the full gig file.

So, are the other rackspaces (that were not loaded via predictive loading) slowly loading in the background while are you playing?

Thanks jeffn1. Yes, the trade-off is exactly as you are describing. The effects can be noticed when viewing from the rackspace views. Selecting different rackspaces show each of the blocks in the rackspace highlighted in red and shows ‘Loading’ and for a few seconds. The block then becomes active as normal. This isn’t obvious from the songs view.
The problem i’m now facing is that, on occasion, when moving between songs, GP is actually freezing and becoming unresponsive to the point where it needs to be shut down. I will continue to try to identify where the issue lies when i get some time.

Yes, I think this should only be used if you are able to load the full Gig file.

Actually it would be a nice GP option (instead of a “hack”) for people who can load the full gig file (instead of a hack). Maybe GP should consider implementing it.

GP can call it “Speed Loading” (or whatever). Basically GP would initially only load the first 49 (or, even better, just the rackspaces in the start up setlist if in Setlist mode) in order shorten the initial start up time, and then GP could load the remainder of the gig file over time while you are playing.

This would be a nice option to have if you are pretty comfortable your are sticking to a certain setlist/rackspaces, but there might be a time when you need something else at some point in the session. But you are in a hurry to start the gig/rehearsal.

[If your Gig file is to large too load without predictive loading, then this would not work. In that case, you would need to take other steps (increase ram, predictive loading, work off smaller gig files, Kontakt (other?) methods for reducing ram usage, etc.).]

I think pressing some keys to force loading those helps.

There are posts about it but using a mobile phone i cannot find them easily.

Also simulating note presses via a script may help.

Actually, i think it should be possible to load a gig file using predictive loading, so the first few rackspace will be loaded… then gig performer becomes usable/responsive, and meanwhile the remainder of the rackspace will be downloaded in the background.

When changing the rackspace, the priority of loading will be for the selected rackspace and surrounding rackspaces.

This needs a reimplementation of the loading algorithm of course.

This isn’t obvious from the songs view.

It would be nice if this would be shown also in song view.

It seems that the 3 predictive songs are the ones in the middle. To reduce the 45 seconds it needs to load now, can be even improved by creating 3 (number of predictive songs) with an empty rackspace. I didn’t try it yet. Not too worthwhile maybe, but just an idea.

Edit: After some testing: it seems the last loaded song is used so keeping 3 empty spaces will not work, unless you close GP after selecting the empty rackspace.

Btw, when using the predictive song ‘hack’, don’t forget to chose the song/rackspace you like to play, as GP is unresponsive until all rackspaces have been loaded when turning predictive loading off.

(It would be nice if it worked more intelligent: start loading all songs/rackspaces in the background, when another song/rackspace is selected, prioritize on loading the selected and keeping the application responsive.

One hack for Windows users that have single-client MIDI drivers but want to use them in multiple apps. One of the solutions is using virtual MIDI. Check this thread.

@npudar - thanks for sharing this. Although it works great, it feels like a clumsy work-around that could be integrated into the product in a future version - split up the Predictive Loading feature so that (if you want) you can have it turned on when opening a file, and turned off when running a performance. There may be technical reasons this can’t be done but it’s essentially what I do manually through a multi-step process.

Also, I’ve since simplified the process since the video. I configure GP to NOT open previous gig - which shows the starting dialog and - so new steps are:

There are several ways I could see to streamline this - including just adding “Use Predictive Loading” to the startup dialog.

Gig Performer is such an amazing product - I can’t say enough good about it!

Thank you for sharing.

How to see all rackspaces for a plugin → LINK

Read out any gig file to provide an Excel-list of used plugins which can be filtered in various ways, with this tip! 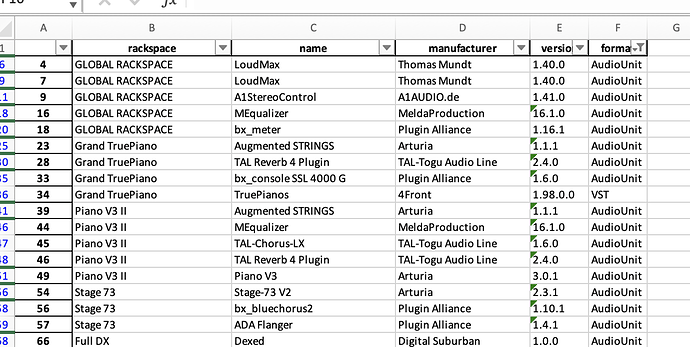 With my updated script I am able to create a list out of a gig file to figure out, what plugins are used in every single Rackspace (and in which version they have been introduced…) – TripleB

This is very useful thanks.

I’m intending later to improve my rackspaces, and high likely I want to ‘find’ plugins I want to replace, or at least check where I used those plugins.

This is exactly what I was looking for to find plugins to replace.
But I don’t understand what to do or how it works…