I have two guitarists in my midst, one using a ZOOM G5n guitar multi-effects and the other a ZOOM G3. I don’t know what these devices are worth, but the reviews call them mid-range and entry-level.

They both claim to be happy to travel light and probably see no reason to carry around a laptop, an audio interface, GP and a collection of plugins.

Among the guitarists we have in the GP community, what motivated you to switch to a GP setup from a more “traditionnal” one?

I started using software based rigs, because it was waaaay cheaper than buying all pedals/equipment that I wanted.

In my case, the biggest thing is the sound itself. Last week during a rehearsal another guitarist showed up with a BOSS GT1000 I think. We tried several things and closely matched sounds, but the difference in tone was really big. My sound was somehow hi-def in all cases, more rounded, more bottom and top, clear and somehow always had more definition.

In addition to that - the flexibility that I have is unmatched. I pick exactly the components I want or sometimes tweak those to my taste.

If you’re traveling using a plane - it’s much easier to bring all your tones with you on a laptop. Then just rent an audio interface and any MIDI controller at the place where you have the gig and you’re all set.

You can have a backup ready to go. I always have one although I’ve never had to use it so far.

Having said all this - guitarists love to have a pedalboard so that’s the only real drawback at the moment. As you know I’ve built myself a box that I just power up and I’m ready to go, but take alook at this:

If you use the BOSS SY1000 Guitar Synthesizer with Gig Performer, this plugin might be interesting for you. [SY1000_Pedalboard] The original idea came up during the GP4 beta phase and the great new possibilities of GP Script and can be found here in a scriptlet. However, this solution didn’t work out in practice, because a scriptlet is not the right tool for this large number of parameters. In the last months I have been working a bit on programming VST plugins with JUCE in C++ and implemen…

This could be smaller and lighter without the SY1000. One can just put a MIDI foot controller there with one or two expression pedals and a small, portable lightweight GP system could be ready. A spare computer can also be mounted there just in case.

It’s very hard to compete with a decent computer+decent audio interface these days when it comes to sound quality. These integrated devices, specially the ones on the lower end of the spectrum, simply don’t have the processing power or high quality AD/DA converters/preamps to sound nearly as good.

Those are my reasons, but I’m heavily subjective on the subject

Those are my reasons, but I’m heavily subjective on the subject

For me it was based around making a rig that worked the way I wanted it to work.

I had been using hardware modellers (Line 6 mainly) for years before and started down the plugin path using the digital out from my HD500 to Mainstage to use an IR loader and play around with IRs. At the same time, was playing with also running tracks/soft-synths from a laptop so it worked well to run the HD500 through an interface, use a nice IR and then out again. But the thought then came - why don’t I just do all the modelling on my laptop? Found some nice amp sims and could get as good if not better tone than the HD500.

Then GP came along and I realised that I could not only have a better tone but could also set up each rig, switching, etc how I wanted it to run rather than the options available on the hardware. I could take the best methods of organising sounds/patches and FX from various hardware and set it all up in GP.

Haven’t looked back since! (especially once I made my custom MIDI controller that, again, works how I want it to work)

I think it takes quite a jump for some guitarists who are used to ‘solid’ amps/FX but once they realise that a laptop isn’t going to crash as soon as you look at it funny, then the results can be great. Show them a setup with a top amp sim, reverbs and delays by ValhallaDSP, and other plugins all running top notch emulations and they hopefully will see the quality that can be achieved!

I’ll just point out that several rather renowned guitarists that are now using Gig Performer were using high-end systems like the Fractal Axxe before.

You can ask here: The Virtual Pedalboard hits the stage

According to pics, he ( @Ali_B ) has enormous experience in hardware and software rigs.

Of course, I’m a keyboard player that plays guitar also through GP. My reasons for choosing GP over a pedalboard/amp/processor as are as follows:

For me, it is about sound quality, flexibility, and the possibility of exploring uncharted worlds of sound and fx. I am in situations ranging from prog/metal to really out there experimental, with everything in between including acoustic 12-string and pretty “normal” rock/pop. So I need a really wide variety of sounds, not the ones that come in the devices you mention. The availability of the highest-quality amp sims, fx, reverbs, etc., the ability to control synths using MidiGuitar2, plus the (unlimited, really) number of controller pedals I can wire in to mess with stuff makes GP a clear winner for me. And: It all fits in the case I used to carry my VG-99 in, and the sounds and flexibility are way beyond the Roland of course. And yeah, for me much easier than buying/hauling around a bunch of pedals or a pedalboard. I do have an alternate setup for really small gigs but it is also software-based: an iPad with TH-U and a couple other things, a Blueboard pedal switcher and 2 expression pedals (and a small amp). That fits in a very small case and goes to tiny clubs where I might accompany a singer-songwriter, for example.

For those of you who previously played on a hardware multi-effect, if you had to choose just one software alternative, and only one, what would be the plugins amps/effects collection you would recommend to convince a guitarist?

Sorry I had to reformulate the question. I meant a plugin based alternative.

I guess the final choice will always depend on the preferred musical style, but the plugin that “got me” instantly was the Archetype “Plini” plugin from Neural DSP… i was really impressed by the effects quality, the responsiveness (how it reacts to the volume & tone of the guitar) and also the flexibility of the sounds you can create with it. I first used S-Gear 2 from Scuffham, but meanwhile i really like the NDSP stuff more…
But i am a real rookie regarding guitar playing - maybe the “Pros” will have another opinion.

I have not tried it yet, however the Line 6 Helix Native is supposed to be as good as an actual Line 6 Helix (at significantly less cost). My guitar player has a Helix LT and it sounds absolutely AMAZING. I’m considering switching from Guitar Rig to the Helix Native plugin.

For me its a combination of everything. I always had high end pedalboards. The sound was good. But not as good as you can get with today’s plugins. The GP setup I have now is:

What are you using for amplification?

Not sure what you’re playing, but for most guitar modeling and synth plugins you’re best off with a full range speaker. I just use an active PA speaker or go direct into the board.

The GP rig for guitar has endless posibilites that are impossible to get with stand-alone gear. For instance using Midi guitar 2 for playing organ or cheesy sax-solos. Another super cool posibility is using the guitar match feature of Bias fx 2 as a frontend for other plugins. Then you can not only have all the gear in the world, but also all the guitars. Quite astonishing how choosing the right guitar in front of an amp makes all the difference. It is also much easier to dial in the guitar tone from some famous guitarist on spotify when you can play a song from him in the same speaker as you are using for you amp, at the same time as you play yourself.

I’m a guitarist for the past twenty years. Test every setup a guitarist could imagine. Various brand of multifx pedal, racks units, analog stomp boxes, and so on. On the year 2010 I discover various guitar vst’s that emulate guitar amps and fx pedals. To mame a few, amplitube, guitar rig and so on. Because I was impressed by the sound of these vst’s, I wanted to use it in a live situation. At that moment I had the hardware technology to accomplished that. But, at that moment there’s no software to bridge my guitar with the computer and vst’s. At that moment I had to use like 4 type of software to accomplished what gigperformer do. At that moment I use ableton live in conjunction with midiox, virtual midi ports, and bome midi translator. Gigperformer can do it what all this 4 software do. After 10 years of experimenting I must said that yesterday on the service at the church, I played my guitar with a gigperformer setup. The experience was amazing in terms primarily for the sound, the ease of connecting the gear. Everything runs smoothly.

In terms of gear I’m using the Boss GT-10 because when you connect it to the laptop, the PC see it like and audio interface. In addition and this is a plus, the Boss GT-10 works at the same time like a midi controller. so I don’t need two type of gear to accomplished the two functions. I send a picture in this post. Don’t know if you can see it. If don’ let me know. 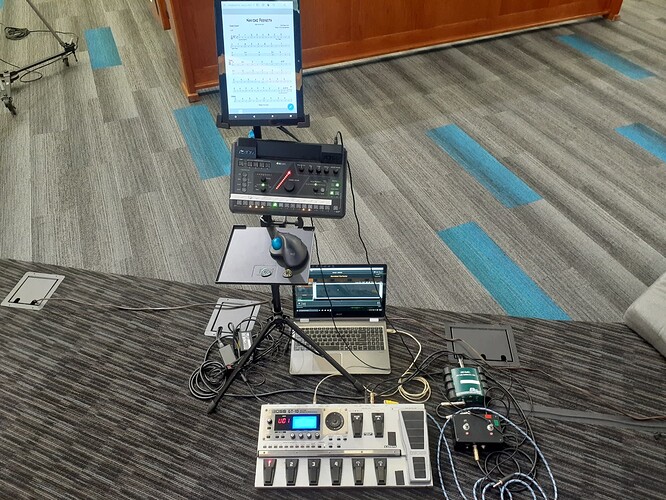