Optimizing a PC and Windows

Having invested in a new Dell pc to replace my old Lenovo, I’ve just finished reinstalling everything and am in the process of optimising thanks to the excellent @npudar guide

.
I have doubts about things that are not mentioned in the guide:

I hope to finish this quickly so I can focus on the next GP update when it comes out.

Since you invested in a new PC, I suggest that you test it A/B.

I think that Dell is a good bargain.

The latest “killer” feature that I like to kill is the HP Wolf Security. A PC is virtually unusable when this feature is up and running…

I will quickly kill that Killer
And I will try the A/B method that I don’t have the reflex to think about!
I will have to start by creating a CPU intensive gigfile because with my old PC I tended to save resources…

Is that in the book?

Is that in the book?

It is not. This app in not installed on all windows pc. This is the first time I find it in my new Dell and it is not installed on my 4 other computers. And never proposed in Windows updates.
Killer control center

Yet another games/video optimization app.

I wonder will they ever release an audio optimization app

(It’s not in our guide, we showed HP apps as an example).

(It’s not in our guide , we showed HP apps as an example).

Thank you for the clarification.

I wonder will they ever release an audio optimization app

They have already spent so much time optimising Windows Pro for the Xbox, let them recover from their efforts first…

Windows 10 had a feature “Fresh start”, which also removed all the pre-installed apps (read: bloatware) and kept it as clean as possible.

Link: How to Reinstall Windows 10 Without All the Bloatware | Laptop Mag

Thank you for the information, I will keep a close look at it. But it seems to be an automated process and I do not like applications where you can not see what is being done and you can not override the settings.

I have used for several years ready-to-use scripts like :
#Uninstall Calendar and Mail
Get-AppxPackage windowscommunicationsapps | Remove-AppxPackage
which included all the applications and services to be removed to optimise Windows. The advantage is that you can choose what you want to keep and what you want to remove and you can add more or less.
As I stayed a long time without redoing an installation from scratch, I did not seek this type of script updated for the last versions of Windows.

But it is true that this “fresh start” feature is a quick solution to clean up the system, thinking one should first make an image of the system to find what may be missing after debloating.

There, it is done and I can see I made the wrong choice: the cpu load doubles when deactivating the following Intel features. That is considerable …
.
The computer is a Dell G-5511 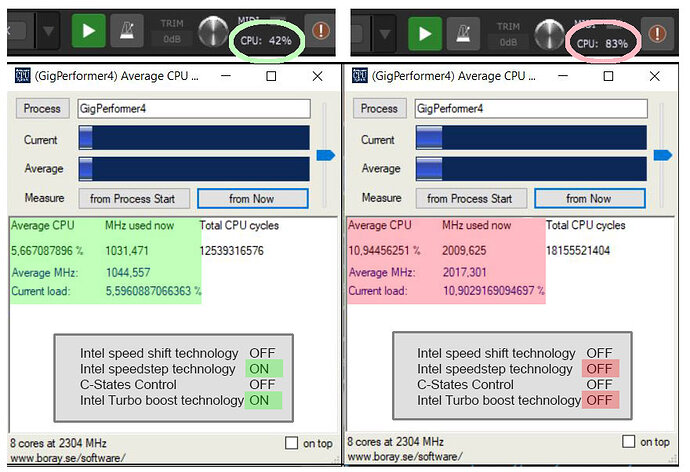 I want to mention this as a warning to users of Dell laptops. I’ve run into a huge issue on BOTH of my last two Dell laptops, affecting the entire Windows 10 system, not just GigPerformer. I actually paid $100 for Dell Support, and they were no help. I ended up figuring it out after months and years of googling and testing. The problem was that the whole system would slow down to a CRAWL at random times - sometimes after a week or two, sometimes several times a day. I only found the solution when I started searching for “CPU throttling”, which is actually what was happening, it wasn’t due to drivers or software at all. There’s a free application called ThrottleStop that has completely fixed my problem, it’s like a miracle, and my current $500 Dell laptop is now running full-time at its rated speed of 3.08 GHz, where before it would frequently throttle down to 0.3 GHz and less, making it basically unusable. The writer of ThrottleStop says that this is a common problem on Dell laptops, and is often (as in my case) due to a faulty signal, BDPROCHOT, being generated when nothing has actually overheated.

When I received my new Dell laptop some weeks ago, I started by deleting all partitions including system, recovery and all that other partitions created by Dell.Then I reinstalled a new Windows OS.
Of course, I do not benefit from the Dell guarantees and assistance, but thus I avoid juggling the Dell system and all their software and services, not knowing which one can be safely uninstalled or needs to be untouched.
I do this for years with all the PC I had before.
Asus, Lenovo, etc, have also their specific hardware system and software as well as Windows has his favorite tools and apps like Xbox and many more.

A processor is built to work at its maximum (allowed) capacity without problems if the physical and mechanical conditions are respected.
To compensate for the lack of automatic protection features installed by default by Dell, the BIOS thermal management should be set to ultra-performance, so the processor cooling fan speed provides maximum ventilation.
Furthermore, an effective external cooling pad should be used if possible.

And of course, in order to reduce background noise and to further protect the equipment, it is necessary to open and dust the computer regularly: dust can not be seen, but it exists and is the enemy to neutralise, especially when playing outdoors.

My previous computer (Lenovo Thinkpad i5-3320M year 2012) has supported the daily, intensive and prolonged load of Gig Performer without any problem for more than 2 years. I think my Dell will handle this treatment without a problem.

I use a Dell laptop (5210 if I recall correctly), initially I got a lot of pops/crackles when getting over 50% CPU, even after removing a lot of unnecessary drivers/services etc.

Then I found out my audio interface was the problem and now I can get upto 90% CPU usage without crackles/pops, which works fine for me.

It is unfortunate that many users don’t recognize the importance of a decent audio interface with high quality low latency drivers for live performance.

“It works in my DAW” is what one often hears. But a DAW does not have to do what a live performance host has to do. In a DAW, most of what needs to be played is known in advance (they’re already recorded in tracks) and so most of the audio data can be calculated in advance, sometimes well in advance. In this case you can easily get away with a slower system, slower drivers and so forth since all you have to do periodically is shove the pre-calculated audio data out, a very inexpensive operation (your $10 mp3 player can do this!)

I can get upto 90% CPU usage without crackles/pops, which works fine

Thank you for the feedback! Those are great results.