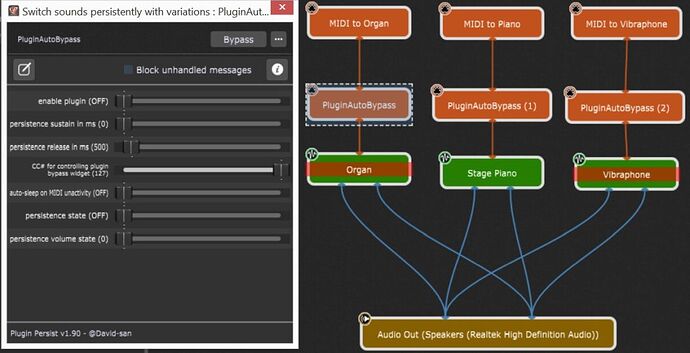 Introduction:
Many Gig Performer users build rackspaces in which they use button widgets to bypass/unbypass instrument plugins in the variations. As plugins themselves may not behave as you would expect when they are bypassed or unbypassed, this scriptlet adds more stability if a plugin is poorly implemented.

New features:
This new version of the Plugin Persist Scriptlet, created by one of the greatest Gig Performer gurus @David-san , is a major overhaul with auto-sleep and fade-out features.

Here’s a word from the author on what’s new:

Info Message:
A Scriptlet which simulates the Patch Persist feature for instrument plugins which are disabled when switching to another variation of the same rackspace. It also adds an optional persist sustain time followed by a persist decay time after the last note is played. Furthermore, it prevents from stuck notes when bypassing a plugin while playing. There is also an auto-sleep option which makes it possible to disable the plugin and possibly save CPU, when no MIDI activity is detected.

17 Likes
Bypass and Don't Bypass in Song Variations
Gig Performer Resources
Question about Plugin Persist 2.0 and GP version
Drum kit plus other plugins in the global rackspace
Arturia (and maybe other plugins) setting to keep an eye on