This rackspace was specifically designed to solve a problem where a MIDI controller with 16 pads had to be used to trigger sounds from a drum plugin, and to visually show what pad was actually hit.
So the goal for the rackspace panel was to show 16 pad widgets which should be lit when the according note was played (and turn dark at a “note off” again).

Unfortunately the pads of this controller were sending out note events only, which made it impossible to MIDI-learn the widgets with notes and make them behave the expected way.

The workaround for this problem had to be solved by using a short GP-Script which reacts to note events and, if the according note is played, switch the corresponding pad-widget ON or OFF.

To keep the script as short and effective as possible, i used two arrays… one for the widgets and one for the notes, because they have the same number of “members”, the particular element can just be addressed by using the same “index” for both arrays.
In addition to the arrays, the “On NoteEvent()” callback with “range constraint” makes it again easier to only “catch” those notes which were needed.
A very important point is, that every note which is “caught” by this script, must also be send out to the MIDI-block again - otherwise the played notes would trigger the widget, but they would not be sent to drum plugin… no note, no sound!

This is the script which works in the rackspace:

Maybe this might be helpful for some of you…
(And if there are questions, just ask…

Exactly what I was looking for - Thank you!

If this is of interest for you you can also have a look at this Scriptlet:

It is a simple idea which consists in a set of identical convertion cells. In each cell you can grab a note from any MIDI controller and swap it to another note. For each cell you can also modify the output channel. So when using MIDI constrainers at the output of the Scriptlet, you can use MIDI channels to select a particular plugin instrument. [Notes-Converter] It is very convenient for playing drums with pads, but if your pad sends only percussive short notes, like with drum pads or smartp… 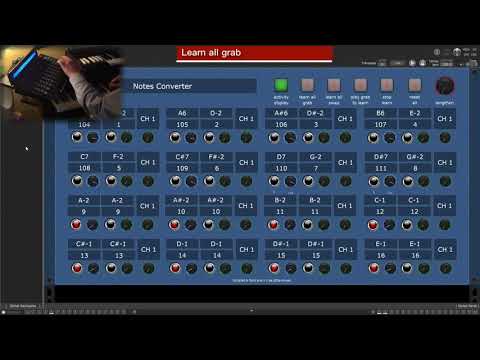