First snow this year, time to write some lines on what I have been doing since September

Today I want to provide my current work on a handy scriptlet to control the LEDs of the MIDI button, and the buttons LEDs on the right side of an Arturia KeyLab MkII controller.

As the MkII does not support MIDI controller feedback ( GP “sync”) to control the button states, I tried to figure out a different way. Reading through some articles here regarding the LCD screen, I finally found some comments on the Arturia forum how this could work

There’s a lot of room for improvements, but I just wanted to provide a basic sample script and I’m also requesting for some feedback and thoughts!

The attached KeyLabMkIILEDs.gig (262.6 KB) provides two rackspaces to demonstrate how this scriptlet works, based on the GP included HaNonB70 B3 Organ VST3.

YOU NEED TO ADJUST THIS TO YOUR NEEDS (Audio & MIDI…) - this also means you need to do a user preset on your Keylab mkII providing MIDI CC messages on the used buttons. 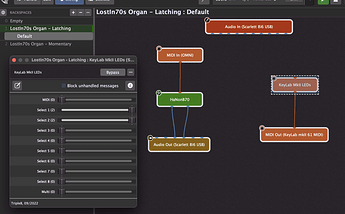 Some limitations in advance:

I’ve implemented a Halfmoon switch (with some additional rackspace scripting…). Leslie S/F is controlled by Sustain CC64 - only when Leslie is enabled. This is reflected by a slider widget with Slow (left, MIDI LED off) - Brake (middle, MIDI LED dimmed) - Fast (right, MIDI LED full bright)

And here we run in our first trap: typically you would use momentary button switches to avoid the Keylab FW to light up with the programmed LED and colour. As GP reacts on the button down the scriptlet would send out immediately a LED on (or off) sysex which will be overwritten by the mkII when you release the button… So flickering and wrong colour on the mkII…

Therefore, I introduced a small delay in the scriptlet for sending the sysex for the LEDs slightly later…

If you want to use latching buttons, you can reduce (or even comment out) the delay - for non-latching buttons you need to adjust the timing to you demands.
Keep in mind, that all delay times sum up, when a rackspace is activated (sending all of and variation states…). 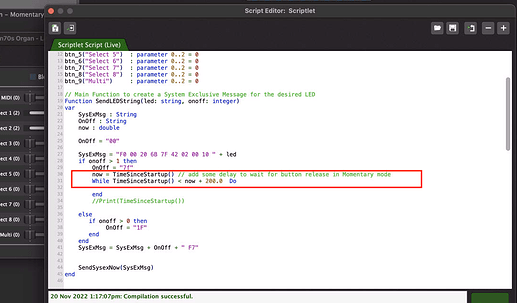 … and don’t forget to provide some feedback here

Hi, your script is working perfect !
Is it possible to add the buttons solo,mute, record , … and the other daw control buttons in your script ?
// Arturia KeyLab MkII LED On/Off Scriptlet
// tripleb, September 2022

I tried to define btn_solo(“solo”) (this button is named solo in ARTURIA CONTROL CENTER
I then added
On Activate
…
SendledString("34 ",btn_solo) (34 is hexvalue of 52 which is the cc received from this button)

I tried also with the decimal value 52 but the led on the solo button is not changing.

Maybe I have it all wrong and you can help me out here ?

I’ll try to find some time at the weekend, unfortunately quite busy at the moment

With this information you can easily modify my Scriptlet introduced above

@vercom you are on the right way:
btn_1(“Select 1”) describes the name for btn_1 in the scriptlet panel - I used the default panel names 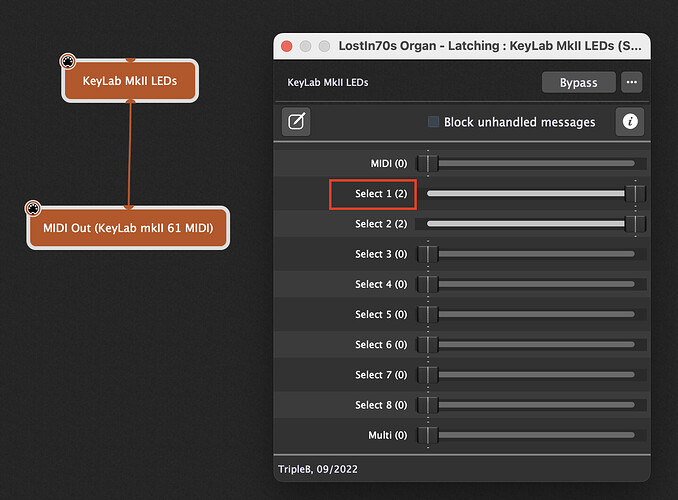 And don’s forget to declare a new slider, defaults in On Activate

PS: maybe we should bring this all together one day with the Arturia Keylab : display on LCD screen thread…
[Edit] just replaced the PDF because of two minor corrections…

Amazing ! Just tried with the solo btn and it works.
Thank you !

Just one more update for today

In the rackspaces 3 and 4 you will find a new Scriptlet where you can setup the initial colour of the 16 Pads of an Arturia KeyLab MkII, just use the sliders and check 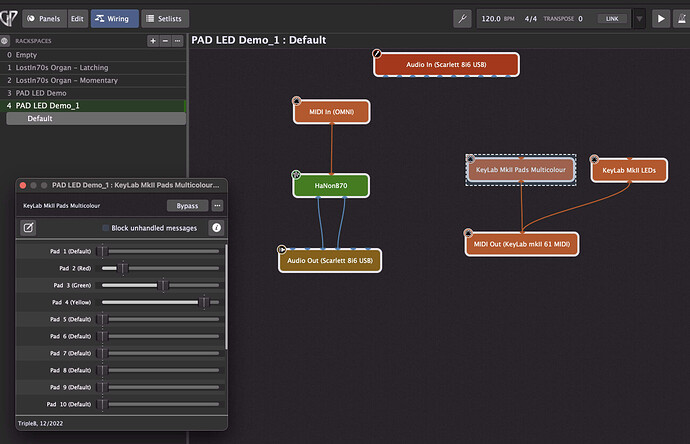 I had some trouble when sending too much SysEx, from time to time not all LEDs had responded, so I introduced some guard times in the Scriptlet, when the rackspace gets activated.

The Scriptlet in rackspace 4 ist the latest edit! Just switch between the rackspaces 1-4 to see the different behaviour when activating them

I’ve played around a lot with the latest version od this scriptlet. For the moment I’m fine.

I just recently purchased my Keylab 88mkII and and very interested in integrating this script into my work. However, since I’m a totally newbie to scripting and what it can do, my eyes have been watering over in attempting to follow this thread. I guess my initial question is should this script be installed in a Global rackspace? Is there a template already built that would allow me to jump start this endeavor?
Many more questions to follow, I fear…

you need to place the scriptlets in every rackspace you want to have access to the LEDs of your Keylab mkII and wire it to the KeyLab MIDI port. Just have a look at the picture in the initial post.

If you want additional support to reset the PAD LEDs when leaving a rackspace you have to copy the Global Rackspace script of the KeyLabMkIILedsV3.gig to your own giggle.

You can either go by copy and paste to an external editor while replacing the gig, or better: open a 2nd instance of GP and just copy and paste from there the complete blocks