So last night was my first proper test-drive for the new update in a live situation. We had a record-release party of two differend groups. Our band Jupu Group played a set of originals composed by our leader Jupu, who used to play violin in the Finnish prog rock and jazz scene in the early 70s. 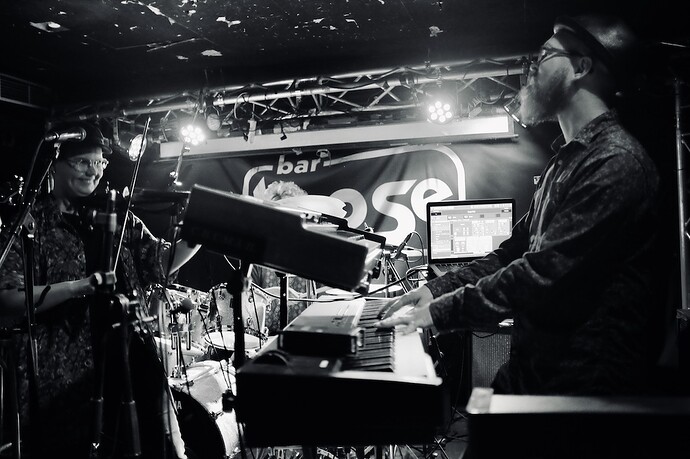 Just this week during the last rehearsals I found my new ideal organ rig for gigging: plugging the Crumar Mojo61 into my usb-interface and routing it through the tremendous IK Multimedia Leslie. Very stable and CPU-friendly choice. After comparing a bunch of alternatives last week (my trusty old Neo-Music Mini-Vent pedal, GSi Rotary [which is actually the built-in leslie of Mojo], MVintageRotary, the built-in leslie of AcousticSamples B-5), the IK plugin seemed to shine through the PA-system after some tweaking.

Otherwise this gig was plugin-wise relatively simple: AcousticSamples C7 for piano and VTines for rhodes, a couple of effects, and u-He Repro-1 for one lead synth solo. Originally I was planning to bring in an actual Prophet, but I settled for a plugin this time since there wasn’t too much room on stage (the other bands kb player insisted on leaving his gear behing me on stage since there was so much complicated wiring happening).

One thing I just now tried for the first time in action was an idea I got from Robert Martin’s set-up: as you can see in the diagram, everything goes through a channel strip plugin (bx _console SSL 4000 E) which allows me to do nice amount of eq:ing, set good levels and add a bit of harmonic distortion for each instrument. The end result was nice, cohesive sound. 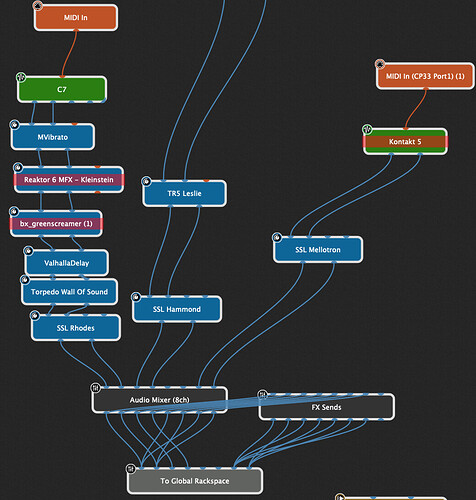 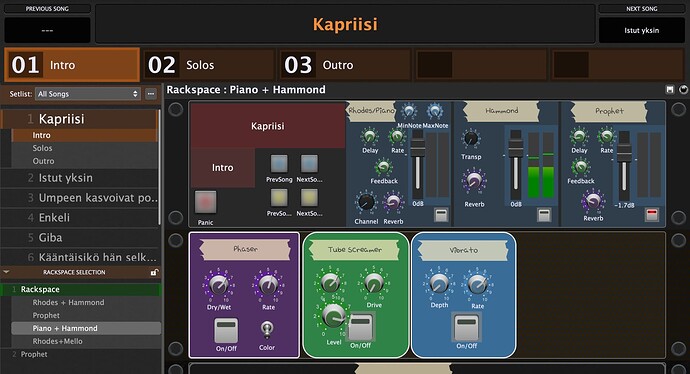 A short instagram-clip from the middle part of one of the songs: Login • Instagram

Mikkopat, thanks for the mention. Essentially, we’re both adapting the mixing console model and using the global rackspace to function as a master buss processor. I like to use different, individually selected console models for each instrument at the rackspace level, then apply global processing to the whole rig at the global rackspace level. It’s the best of both worlds and easy to build, thanks to the flexibility of GP.