Widget for Reverb in seconds instead a value?

A question.
Is there a way to use a widget for Reverb in seconds instead a value?

What reverb are you using? 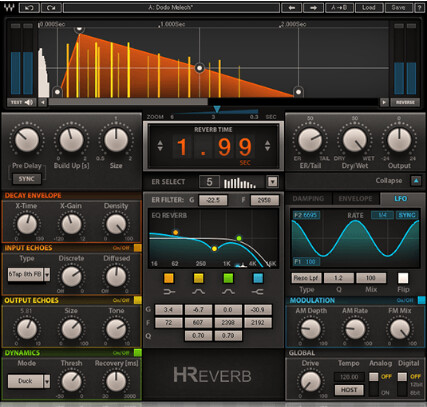 And how looks your widget mapping?

Well,… What I want to achieve is this

So I can see the reverb time in time seconds

OK, but how looks your widget mapping to the plugin parameter?

So I can see the reverb time in time seconds

The Plugin has to expose in seconds.

Like @dhj said, the plugin has to expose the parameter value this way.

From what I’m seeing of your image, the plugin is making that time available as a normalized double between 0.0 and 1.0, which is pretty much routine. However, the plugin can also define a parameter string value containing anything they want and in this case they could expose the time as a formatted string. The ability but not the requirement to do this is available through the standard plugin SDK.

But the plugin developer has to explicitly do that. We can’t - no host can!

If the plugin does not expose that time as a parameter, then you should contact the plugin developer and ask them to add that functionality.

Thank you for your clear information.
But I don’t think Waves gonna change it on my request haha.
So I have to deal with it

If the range of that reverb time is always the same, for example if the max possible time is always 5 minutes (I’m making that up) then 5 minutes would correspond to the 1.0 value that does come back.

If that is always the case then you could use GP Script to convert the values between 0.0 and 1.0 (which would presumably equate to a seconds value between 0 and 300 respectively and then create a formatted string and attach it to a label.

Since .238 corresponds to 1.5 minutes (per the HReverb screenshot):

Granted, the numbers are approximate; however, this appears to be a decent starting point.

1.5 are nog minutes, but seconds

Ah, ok…I got fooled by “sec” below the 50 and assumed the 1 to be a minute. Well, then, no way we’re gonna get 6 minutes worth…perhaps about 6 seconds, lol.