Translate a long press from FCB1010

Yes…with the Un0 chip in the FCB1010 you can choose between “Stompbox” mode on or off. In “ON” the switch acts normally…on when you press it and off when pressed again. With “Stompbox” mode turned off the switch goes into a “momentary effect”…the switch stays on as long as you keep it pressed. When released the switch is now off.

In the above MIDI Monitor screen shot the first entry is the switch held down. The second entry is when the switch is released.

I have one switch set up as a sustain pedal and it works quite well. There’s no variance as in a normal sustain pedal (such as half pedal, etc.) but one doesn’t really notice this in most pop music. My other switches do all the other chores such as Rackspace up & down, Next & Prior Songs, Next & Prior Song Parts. Then, I have 2 expression pedals which work quite nicely for volume and wah, etc.

The Un0 comes with it’s own programming software that is fairly easy to use. 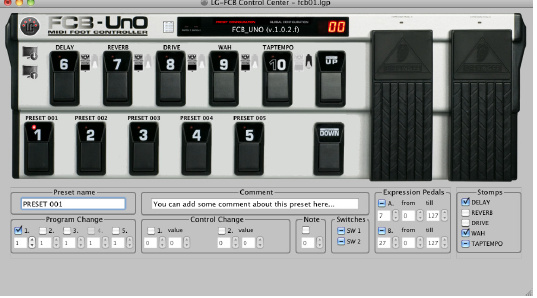 With “Stompbox” mode turned off the switch goes into a “momentary effect”…the switch stays on as long as you keep it pressed. When released the switch is now off.

That’s the same behaviour you can get with the standard FCB1010 chip if you use Notes. What @DavidStypka was needing was the one button to send 1 CC or note with a quick press, and a different CC or note with a long press. The controller would send the ‘quick press’ CC based on how quickly the release was detected, or would send the ‘long press’ CC if the time between press and release was over a threshold. I don’t think this is possible with the UNO chip (at least I haven’t seen it).

Whoops…I guess I completely misunderstood his initial comments. Yes…that would have to be up to some scripting, etc.

So scripting is definitely mandatory for what @DavidStypka wants to do.

Yes to @David-san. There is no big deal to write it down in code (with a little help of my friends) :). There is something I am thinking about for last few weeks. With your UnO chip, @jpt, you are able to do almost the exact setup I have now with my stock ROM (yet without scripts). Because here you can choose from the exact same parameters, as I can see in your screenshot. 5xPC, 2xCC, note value and switches, expressions. The only difference is the very right side, when you can select stomps, which I am doing just by selecting CC instead of PC.

But… Even if I can send long press from there, I am afraid the GP global MIDI learn will not recognize it. Actually, you can try it.

You will definitely have a lot of friends here, but I am pretty sure you will have even more that will help you to learn scripting if you tries to

I was learning some app-scripting stuff while ago, so I think I just need to get familiar with fundaments. I really love the response from this community, you guys help me a lot, and this is my day 2 here <3

But… Even if I can send long press from there, I am afraid the GP global MIDI learn will not recognize it. Actually, you can try it.

This is true. The only way that GP will know any length of time of the switch press is if you have some sort of a timer scripted into a Rackspace.

Which gave @rank13 to me in no time yesterday…

Yep. I am pretty new to that, but for some piece of harware which is roughly 20 years old…

Honestly, I think it is not rocket science and was really wondering why there is almost no good midi foot controllers at the market, which are affordable and from 21st century… I just played with the thought to develop one, fully programable, based on raspbery Pi. Something like FCB2020

I just played with the thought to develop one, fully programable, based on raspbery Pi

You’re in good company here in the forum. Have you seen these?

DIY Floor controller and monitor Stories from the Trenches

I’ve been a long time Gig Performer user and I use it primarily for guitar. When I used real hardware I was never a guitar’n’amp kind of player and was always drawn to using lots of pedals. As soon as I moved to the digital domain I pretty much went to town with it and now use a whole stack of virtual pedals - plus multiple pre-amps, amps, and cabinets. Gig Performer rapidly became the easiest way to manage all this but I really didn’t want have a laptop on stage with me - partly for the look …

After far too long of being ‘in the process of’ making a custom MIDI controller I have actually started! Welcome STJØRN. I have long wanted a MIDI controller to control a GP based rig that works how I want it to work. My live use needs both foot control (I’m a guitarist) over GP but also foot control of Ableton Live to control backing tracks and clicks. I also wanted the controller to display info on the tracks as a sort of HUD. As mentioned, I have been planning this for - literally… - years…

Yes, I checked both… Actually it is still on the table, as I started to see really weird behaviour with my FCB1010 and a few scripts. In my next message.

So I made mistake somewhere. Cannot find where for many hours. The problem is somewhere between binding global midi and scripting. I have only one binding in GPs global MIDI, it is channel 22 CC, which moves variation down. It is pretty obvious in video I attached… The mystery is that when I do the racks from scratch (or from the first and 6th rack, it works, actually for hours. Than it start to behave in a strange ways. That is the moment where I am getting lost.

The weird gets weirder. It works like supposed when i rebind the controller. So it is somehow stacked or filled in time (maybe loop) - but it is about binding not-meant-to-work-this-way value to global midi assignement.

And when I am trying to switch from rackspace to rackspace and variations, GP crashes in a few attempts.

It started to act normally just when I removed the script from bot racks… Mhm. Cannot see what can cause the problem there.

I changed the code, because with this you created an endless loop.
The callback is executed as soon as you enter the rackspace.
So the widget has value 1.0 => switch rack

The code LONG_PRESS.SetWidgetValue(0.0) makes sure that when you enter the rackspace
you have to press the widget

And I changed a property of your Widget, Ignore Variations is checked,

Oh, thank you very much. I was suspicious about endless loop, but I did not fully understand the if else serie rank13 gave me.

It works like a charm! Thanks once again, you saved me lot of work!