Tony is a Seattle native living in New York City and has studied, taught and performed music of many kinds all over the world. 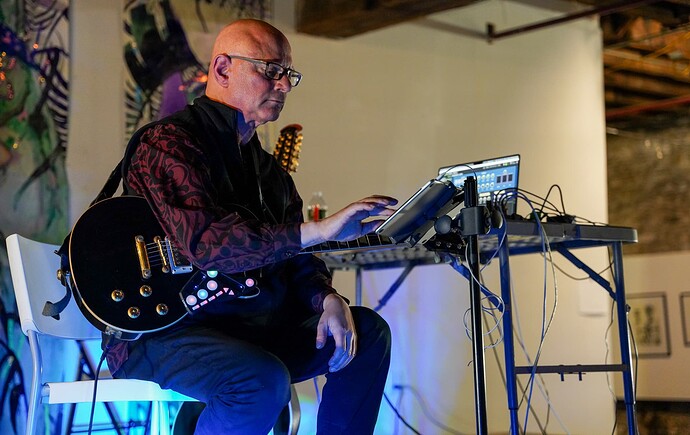 His main instrument is guitar, including nylon-string, steel-string, 12-string and electric. Tony also works as a composer and sound designer for theater, and as mix engineer, producer and occasionally recording engineer for various recording projects.

In this live stream, learn how Tony is using Gig Performer: Tony is a member of the theater company La Compagnia de’ Colombari, Braindance’s live band, and Zero Times Everything. He has performed with, produced, mixed, and/or mastered recordings by more artists than can be listed here - please see the Discography page.

Tony’s own CD of solo 12-string guitar music, “Native of the Rain,” was released by Robert Fripp’s label Discipline Global Mobile records in 1997.

Tony’s career of recording, performing, teaching, theater sound design and composition has spanned the globe and includes many kinds of music, from solo guitar to the Turkish music trio Dostlar (whose 1984 Northwest Folklife Festival performance was broadcast nationwide on NPR) to being a member of the New York Indonesian Consulate Gamelan.

Tony has been invited to teach guitar and music regularly in the U.S. and Europe, and has been associated with Guitar Craft since 1985. He was a co-founder and instructor with the Seattle Circle Guitar School. He was also co-director and instructor at DrumTime, a rhythm workshop, from 1990-94.

In 1993, Tony became Composer-in-Residence and Sound Designer for the Arden Party Theater Company, directed by Karin Coonrod. He designed sound, composed and performed music for many productions with the company (see Tour page). In 1996 he received a grant from Meet the Composer. Arden Party’s last production with Tony’s music was the world premier of Christmas at the Ivanovs’, by the Russian surrealist Alexander Vvedensky, presented at the Classic Stage Company in NYC, December, 1997. Tony was also a participant in the 1998 Nautilus/New Dramatists Composer-Librettist Studio. Over the last several years he has designed sound and/or composed music at the New York Theater Workshop, the Hartford Stage, and for the groundbreaking production of Laude in Urbis in Orvieto, Italy, where he is also a performer.

Tony has also worked as production and post-production Sound Engineer for films and Public Service Announcements, for the award-winning filmmaker Elizabeth Bouiss (Pink, White and Blue; Speak Your Mind; Masters of Dissent and others) and for New York Music and Video Productions (PSAs for Children’s Health Fund, International Planned Parenthood Federation, American Academy of Dermatology, and many more).

I listened to his album “Native Of The Rain” on Bandcamp

A very attractive music as much in the original and elegant musical composition as in the careful and sensitive interpretation with a particularly pleasant, even delicious instrumental sound

I highly recommend it to acoustic guitar lovers (12 strings for more pleasure).

I’ve watched a few of your videos…brilliant. I noticed in one an Apollo Quad. Are you using the Apollo quad and plugins? How?

Hello Axel! Thank you for the compliment.

I have an old silver face Apollo Duo, and for mobile recording an (also older) Apollo Twin. I would love to update them! But, I do not use them live with Gig Performer - in my setup they are for recording and mixing. I have considered using the Twin live, so as to have access to the UAD plugins, but at the moment I am using an Axe I/O by IK Multimedia for a live guitar interface, so I do not use my UAD plugins live. I have everything I need for live use from other companies.

However: UAD is at the beginning of a slow transition to including native versions of their plugins, and there are a few UAD plugins available that don’t require the hardware. Nothing that I use live yet, though.