until about a year ago, I used a Korg Kronos 2-88 and a Roland A-800 Pro on stage (the Kronos is not so good for fast synthesizer solos with its hammer-action keyboard). The Kronos has a very classy sound, but is extremely large and heavy. Together with the flightcase it is almost 50 kg.

To get some relief when transporting it, I bought a MacBook Pro and ran it with MainStage. Unfortunately, MainStage is quite complicated to program and the computer was also overloaded relatively quickly.

Next, I tested Gig Performer 3 and found that the software is extremely reliable and very easy to program.
As an electronics engineer, I got into programming synthesizers at a very early age and developed a passion for creating and reproducing sounds. This is especially easy to do with Gig Performer.
The most used plugins by me are:

As central control I use at home as well as live two Roland A-800 Pro Keyboards each and the Elgato Stream Deck with a Presonus Studio 26c Audio Interface. So I only have to transport the MacBook, since everything is duplicated.

On stage, I also use a wireless Deger E-Pipe (electronic bagpipes), a Roland AX-Synth as a wireless MIDI controller (with Panda MIDI Beam), and a wireless start/stop switch to start the show intro (converted garage door opener).

The Roland keyboards have 61 keys, a lot of controllers, aftertouch and a lever, which I personally find easier to use than the usual two wheels. This may be because my first synthesizer was a Korg Poly 61 with joystick

The Steam Deck impresses with its versatility, its price as well as its ultra-rich programmability.
This is done via an app that can program the keyboard commands as well as the LCDs of the 15 keys.
Keyboard commands and MIDI commands are all (!) possible including SysEx.
On stage, the Stream Deck does all of the needed gig performer operations:

I would be happy to answer questions about programming the Elgato Steam Deck or building and working with my setup! 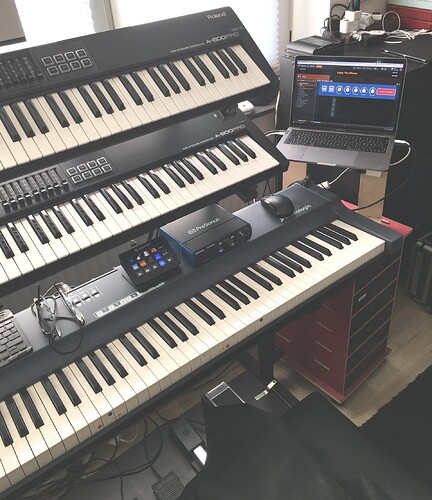 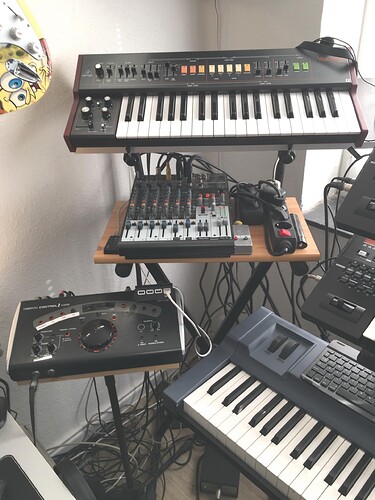 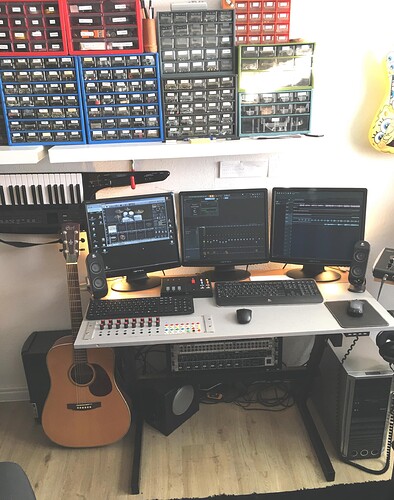 Thank you for sharing this.

Great setup! What’s the controller you have embedded in the white table?

Great setup! What’s the controller you have embedded …

Thank you!
The controller is a selfmade one for FL Studio and includes 8 volume and pan controllers, 8 mute and solo switches, 14 marker jumps, and 14 transport buttons. It mainly consists of a little microcontroller with a lot of pots and buttons. For me it has been a passion to build the controllers I need, if it is impossible to purchase one on market.

Great setup. Thanks for sharing!

I like your utilization of the Streamdeck. What type of information does it send? How exactly does it integrate with GP? And, lastly, what is used to program it?

Streamdeck sends midi data (free expansion) and key commands. It comes with an app that is running in the backbround of my MacBook. Nothing more is needed to integrate in GP.
For programming and changing the lcd icons you simply have to open this app which is self explaining and includes an editor to make your own images.
If you have a second Streamdeck for stage, you don’t have to do a new programming, because all data are stored within the app.
And for this great price it is an awesome tool.

Thanks for sharing, @Stoffel. What is the name of the “free expansion” that you mention that allows Streamdeck to send MIDI data? It it a Streamdeck plugin with app?

Within the streamdeck app go to
Store → Plugins → Music → MIDI → Install.
This will give the app the ability to send all (!) possible midi data.
You can define toggle/momentary, different lcd pictures for on and off status, send sysex, …

NB: I’m not working for Elgato or am getting money for advertising.

Awesome, thank you very much @Stoffel

Just ordered one, may need a little help on it . Cheers

Questions are welcome.
Would be very pleased to help.

Gues you can’t use it for iPad midi without a pc ?

The app only runs on mac or windows and is mandatory to run the stream deck. The hardware has no memory and without the app it simply does nothing.

Ok thanks for clarifying

Is there a way to copy config/profiles?
I want to use s deck across 3 computers. Cheers

The app is able to export/import profiles. 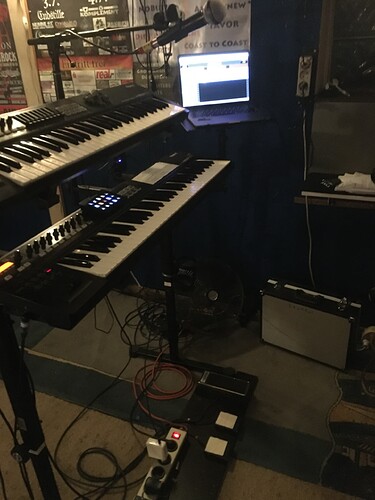 Setup in the rehearsal room:

Since the whole setup is USB powered, it is independent from the 230V mains voltage.

Is the Stream Deck XL too big?

Would you be so kind as to do a video on how you programmed SD to activate various GP functions?

I was intrigued with SD when I read your blog and then blown away when I saw how SideshowFX set up the SD XL to control Ableton Live. I would like to know how to set up a profile for each of my plugins and sync it with GP widget panels. Any advice here would be very helpful … especially before I get myself into a big mess of diminishing returns. LOL!