Hi all. I’m a guitarist who plays along with audio backing tracks. As in many cases, most of the songs have different parts that require different sounds and instrument settings. I wonder if there is a way to atomate the recalling of these song variations during the playback of the audio files (by using markers or sending internal PC midi messages or any other technique. I have achieve these in other platforms such as Sensomusic Usine. Is this possible in Gig Performer? It would be great since this is a more stable and lighter CPU software and the way it is designed fits my needs.

It’s common to use an external program such as Ableton Live to manage this and send GP the specific PC message for the song part, or a global ‘Next’ command (set up in the GP Options). That way you can have a track in Live/DAW for the audio and a midi track for your song part changes.

Hi, I’m new to Gig Performer and trying to figure out the best way to get Ableton to play the backing tracks while simultaneously sending program changes to Gig Performer so that the patch changes in Gig Performer can be automated to change as the song goes. I want Ableton to do all of the patch changes in other words. Just want to use GP to be the VST host. I prefer to do this on windows…I presume I’llneed virtual midi ports installed on windows, Mac has built in AIC driver. Thanks!!

Thanks for you reply. I also thought about doing something like what you describe using Ableton. I took a look to the discussion posted and there are good ideas but, frankly I would not want to use two different softwares for this. It would be great if GP could have a way to control midiclock messages as mtc, mmc and be able to send this messages not only outside the software but internally.

I am using scripting for automated variation changes
When the global play is pressed the on BeatChanged callback is triggered.

but, frankly I would not want to use two different softwares for this.

Using Ableton works extremely well and GP also has the Ableton ‘Link’ feature to ensure tempo is kept in sync.

It also works well in Ableton having a song per Scene.

I’ve come to appreciate having this flexibility with using external apps to complement GP, and don’t see it as an issue that GP doesn’t replicate all of the features that Ableton can provide.

I’ve been using an iPad to control Gig Performer for several years now using a wireless network. The iPad app is called OnSong which is a lyrics/chords app with very powerful midi control. I use RTPmidi which allows the iPad to talk to the computer (a PC in this case) changing programs, triggering fills, muting parts, turning a harmonizer on and off, drum fills etc. Its a very powerful way to use GP and all midi commands work instantly. I take my own router with me and log both the iPad and PC to the network.

It’s a pity they don’t offer the Android version.

“I am using scripting for automated variation changes
When the global play is pressed the on BeatChanged callback is triggered.”

I do not know anything about scripting or coding, I wish I could. It woud be nice if you could explain in more detail how tho do the scripting thing and make it work. 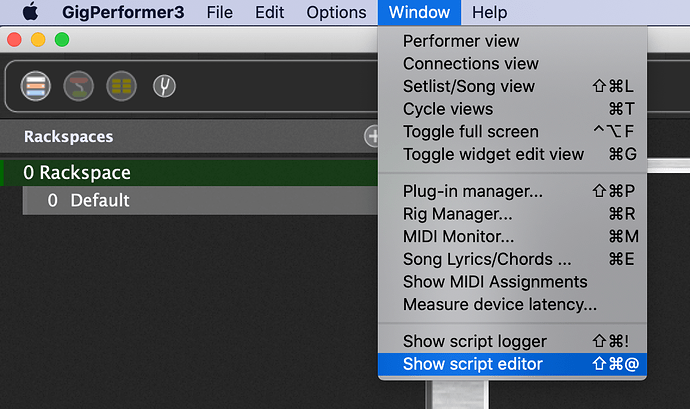 Then in the script editor window paste this code

Hi Pianopaul, thanks a lot for your explanation. Actually it did work but two issues found.

1.- It works only for the rackspace view and not for the song view which is a sort of an issue since viual reference that son view offers is important.

2.- Global play button is tiny and hard to click on. I do use a 7 inch touchscreen display and I would like to add a widget button in one of the racks so it can have better and faster access. to it. Widget can be then midi controlled. As far as I know, this seems to be not possible. Any help on these topics will be greatly appreciated.

In the preferences you can MIDI learn the Play button 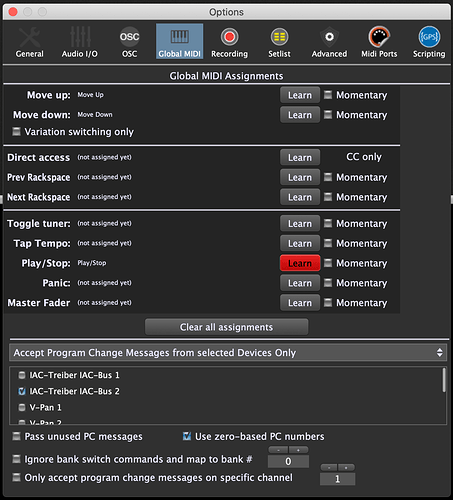 Hello pianopaul,
you´re scripting is great and worked so far. I want to reset the beatcounter by stopping the playback with the global playbutton. Is that possible?

Did you try the new System Actions Plugin?

The System Actions plugin allows you to control various system-wide parameters and commands using widgets (and therefore through your MIDI controllers). This plugin provides...

I used your coding for changing songparts via bars/beats. When i stop my playback (global play) and replay it, the counting of bars/beats goes on from the stopped position. The playback starts from the beginning. So there will be no songpart changes.