I am playing with the trial version of GIG Performer and I love the user interface.
But when opening Rolands Sound Canvas VA PlugIn some buttons didn’t work
and can’t be closed correctly (the PlugIn freezes).

Another problem is an external program sending MIDI-Data via loopMIDI. But all
Program Changes are killed by GIG Performer. I think I had disabled these program change filters, but somewhere something is active.

I tried Cantabile and there the VST Plugin works and also all program changes
are correctly send to the target devices.

Thanks and Best Regards
Martin

But all
Program Changes are killed by GIG Performer.

Program changes are are not “killed” by Gig Performer, they are used to select variations.

As for Sound Canvas, I can’t speak for anyone else but personally I have never gotten that plugin to work properly with quite a few DAWs

Hi @spechto and welcome to GP!

To make the most of GP it is best to embrace the rackpsace/variation and setlist/song concepts.
In terms of PC, these then get used by default to select different rackspaces (technically it’s selecting variations), and they will select the Songs by default when in setlist mode.

I think it was actually @dhj who wrote this blog post on the use of PC vs rackspaces:
https://gigperformer.com/rackspaces-vs-program-changes/

As for Sound Canvas, I can’t speak for anyone else but personally I have never gotten that plugin to work properly with quite a few DAWs

Program changes are are not “killed” by Gig Performer, they are used to select variations.

Ok, I have to look at this. But I think in some situations it is usefull to allow passing PC envents. I my case vArranger is sending the Styles PC envents, if they are not bypassed to the Canvas the style has only drums and pianos 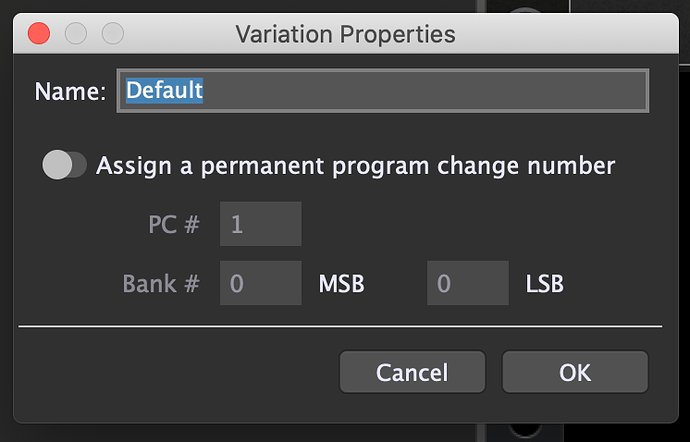 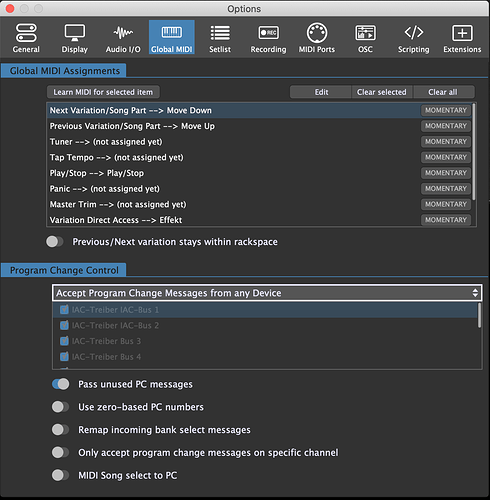 Consider: under normal usage, you want Gig Performer to switch to another variation (in the same or another rackspace) when a PC value is received.

In other words, the PC values that GP sends to plugins (or more usually to external synths) can be completely different than what is received and that’s a far more common scenario, hence the default behavior.

Ok, this works a little bit better. Some channels get the right PC (and some not). But is there a way to say GP on this MIDI-In and that Target Device all PC envents must pass to the target device and all PC envents coming from GP are ignored? The option “Pass unused PC messages” is a little bit inaccurate / confusing.

When understanding correctly, GP uses PC events for the internal switching between different variations. But there must be a way to define clear exceptions, or?

Ok, I (think I) understand the idea of mapping the PC events which are coming from the master keyboard.
The Keyboards sends PC 1 0 0 and
to PlugIn 1 “PC 1 0 12” is sending and
to PlugIn 2 “PC 2 0 7” is sending to get the correct sounds for the different PlugIns.
Is this correct so far?

What are the plugins?
But why not use different rackspaces and get rid is pc changes in the Plugins?

Is this correct so far

It is correct but the thing is, that way is really only for “legacy” approaches to GP and you lose functionality such as Patch Persist. Our experience is that users coming from older systems such as Forte or directly from just using hardware try to replicate that model with GP, which is really not a good idea.

Accept PC from … means only for the GP variations management? If yes, I had to remove the midi port where the PC events from the arranger comes is. So these events can not activate another variation of the rack. Correct?

As Arthur Hailey once wrote, “Mistrust the obvious”. If we were back in GP1 days (5 years ago), I might have agreed with you as at that time our code was still evolving to properly implement the plugin APIs (and also including hacks to work around bugs in actual plugins).

The thing is, Gig Performer uses much more of the plugin API than do many other hosts. Many plugin developers only test their code against a few hosts and if those work, they think they’re done!

As of GP 3.8 (which has been out for several years), I don’t think we have seen a single crash/freeze with a plugin that was not due to a problem with the plugin itself. You’d be surprised at some of the things plugin developers “forget” to address because of assumptions about how the hosts work.

I would encourage you to report the Sound Canvas issue to Roland. We have a good relationship with them and they have access to Gig Performer so they can look into the issue.

Most of the other plugin hosts are different. The way one “talks” to the plugin is standardized but many other plugin hosts don’t always use everything that’s available in that “language”. Our users have found plugin bugs when used within GP and most of the plugin makers were quick to fix their bugs. Roland Sound Canvas has issues in how it deals with its presentation as it assumes certain things which make it somewhat hard to use with GP. Please contact Roland for these issues - these problems are not GP related.

Right. Your Gig Performer is going to be the center of your “universe” and it will, by default, react to Program Change messages switching from one rackspace (sound) to the other. As you get to know GP and start organizign your sounds into rackspaces rather than trying to cram everytrhing into one rackspace and use PC messages to switch sounds within a plugin - you’ll appreciate this.

Having said that - feel free to set the rackspace program change message to number you’ll never use and enable the option to “Pass unused PC messages” which will then simply pass all PC messages to your plugins (you have to. obviously connect a MIDI In block to your plugin for anything to work).

I have here some screenshots, showing the problem (the red one is from GP, the green one from Cantabile): 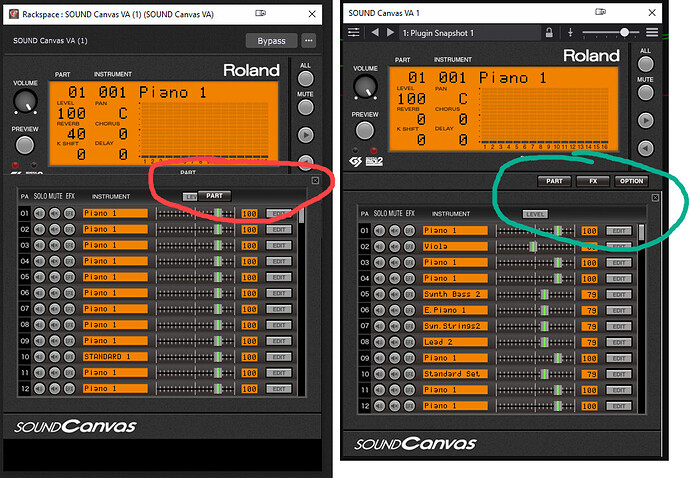 In GP the buttons didn’t work anymore … in general the PlugIn works, but the UI works not correctly.

As I already mentioned - we already know about this. I was trying to say that the issue is within the plugin even though it works differently with other hosts which may be doing things differently as well. No other plugin has this issue with GP btw…

Sorry for the long delay, but for newbies, there is a message limitation per day.
By the way everywhere I can read something with 14 days trial period. On starting
the program today it shows only 6 days, where is the rest of the 14 days (have
istalled the program on the 03.07.21)?

Ok, it looks like there is no (simple) posibility to exclude some MIDI-IN and
-OUTs from the program change feature used for the Variations. But all things
which are coming in from the vArrangers MIDI-Port has program changes which must
be transfered to the Sound Canvas (or another General-Midi Device). I saw that
it is possible to exclude MIDI-Ports from PC envents, but means this that all
events of this port are ignored or means this that all PC events are normally
send to it’s destination (and GP ignores them for variation switching)? I think
in professional setups nothing is in use like a Sound Canvas.

Another idea is to use another ASIO interface for using the VST-Host from
vArranger for sending MIDI-Data to the Sound Canvas, so all other things
can be managed in GP. My UR44-Interface can be used only by one host app
at once

The other solution is using Cantabile or Cubase, but the UIs are much less
flexible and there is no possibilty to create my own Racks with own user
elements

Thanks and best Regards
Martin

Ok, it looks like there is no (simple) possibility to exclude some MIDI-IN and
-OUTs from the program change feature

As we pointed out earlier - you can exclude devices from being used for PC messages and you can also change your rackspace/variation PC messages to a very high number so they don’t react to PC messages (if that’s what you want).

You then use specific MIDI In blocks for specific devices and those will receive your program changed and you can route them any way you want. Into a plugin, into another hardware device … anywhere reall.

We’re all just thinking that you may be trying to re-created some setups the way you used to do them in a DAW where you don’t really have rackspaces, but rather just a single “space” where you have to put everything and then you use PC messages and other tricks to switch and change things durping your performance.