I am looking to see if someone can explain to me what it means if GP4 flashes a red screen when quitting/exiting on a MacBook Pro (12.6 Monterey). Here is what I am experiencing:

So, the obvious answer looks like this is a compatibility issue with the Kontakt VST3 plugin. The problem is that this same thing happens with almost any plugin and plugin format in the Komplete collection from NI. But, I don’t seem to see anyone else highlighting this in the forum or elsewhere on the web, which seems unlikely if that is the actual answer considering how many folks use this suite. If there were an issue I would expect it to be much more common.

Maybe that actually is the issue and it is somehow unique to my system. But regardless - can someone confirm for me 100% what the red screen actually means? Should I be concerned about it (considering that stability is king)? And if so, any suggestions for troubleshooting it?

Also - anyone out there who is using Kontakt (or another VST from NI) in GP4 who can confirm that you do or don’t experience the same thing?

Thanks for the help!

Are you using a trial version of GP?

In trial mode, Gig Performer® will be fully functional for 14 days
except for occasional intentionally induced audio drop-outs
during which moments the screen will briefly flash red.
To remove these drop-outs, please purchase the full version.

No - it is a full registered version. Should have mentioned that in the OP as I do know the trial is one source of the red screen. Thanks for the thought though.

In case it helps, I created a screen recording of what the red screen flash that I am talking about looks like. Looks like new users can’t upload attachments here so I put it on Youtube as an unlisted link here. Just an extremely quick red flash that happens on exit, and does not happen if I do not have Kontakt in the Gig file.

Have you tried to use the VST version instead of the VST3?

Good thought - I had tried both VST3 and AU - both had the same issue. I just now tried the VST type and can confirm it shows the same behavior.

Can you please create a screenshot when this happens?

I only experienced the “red screen” when I had some weird audio settings or pull the USB cable of my audio interface out of my computer.

What version of Kontakt are you using.
There is an issue with Kontakt 7, NI Support is informed by me.

What audio interface are you using? That red flash means that GP detected that the audio interface went away — I’m not sure what Kontakt would be doing to cause that though.

Do you have Kontakt Usage Data Tracking enabled?

Posted a link above to YouTube with a video. Here is that moment paused in the video as a screenshot, but all the screenshot show is the full screen as a bright red at the moment where it happens. 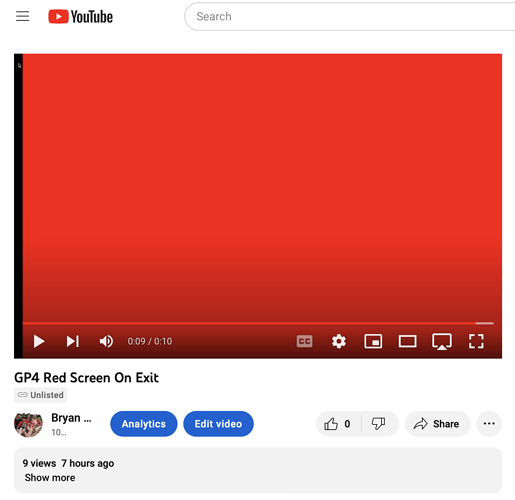 Rate is 48k, Buffer is 512 - nothing aggressive here. Changing that does not seem to affect the issue.

I have three - happens with all three - Behringer XR18, Babyface FS Pro, and also when just using the built in audio of a MacBook Pro 16, 2019 version (Intel)

One new thing that I just caught - I only see the red screen when running GigPerformer in full screen mode - odd. If I take it out of full screen mode before exiting - no red screen. Wish I could consider that solved, but I don’t want to just make the red screen go away, I would like to understand what is happening if possible and be sure there is no hidden instability that will bite me at a bad moment.

@dhj - missed replying to part of your note - I have Kontakt Usage Data Tracking disabled.

Can you upload a small gig, I could test with?

I would like to understand what is happening if possible and be sure there is no hidden instability that will bite me at a bad moment.

First of all, if this is only happening when you quit, I don’t think you’re introducing any instability.
It may just be that the computer is taking slightly longer to come out of full screen and the thread closing down the audio interface got there first.

@pianopaul - sure - thx for taking a closer look!

Here is the simplest of gigs - started with a new empty gig and added an instance of Kontakt 6. Did not even load any sounds in Kontakt or wire it to anything. If I exit this Gig while in full screen mode I see the red screen. If I delete Kontakt from it, resave, exit, reopen, and then exit again (also in full screen), the red screen no longer occurs.

@dhj - Interesting theory - is that explicitly what the red screen always means? That the audio interface became unavailable? If so, any thoughts on why would that would only happen when a Kontakt instance is loaded?

I do agree though, given the fact that it only occurs when quitting the app while in full screen, I am not as worried about potential instability as I was when I originally noticed the issue. Still - it would be great to actually pin down what is happening and know for sure…

The same issue occurs when you use the inbuilt Audio Interface?

is that explicitly what the red screen always means

Yes. The reason is make sure the user knows immediately what is wrong if the audio stops.