I have a gig file with about 20 rackspaces. (1 to 3 songs per rackspace)

Totally random, various rackspaces go dead (will explain). I reimport, its ok, then a bit later, its another rackspace gone dead. I must have fixed 80 in the last week.

I fix one, (reimport) then a bit later another rackspace, or 2, go dead. aaah, its random.

Help, i really don’t want to back to mainstage muh

I forget to say thanks for helping!

Could you please upload one of those mentioned °dead˚ rackspaces in a gig file!
Just drag n˝ drop in a post.
Thanks

Radio Thieves Private Party 001 Set 1.gig (4.8 MB) the song/rackspace is ‘dont you want me baby’, however, it is random, it could be another rackspace.

(once in a lifetime has no sound in it)

Question: has this always been happening or did it just start happening? If the latter, did anything change in your environment (software update, hardware changes, antivirus update, etc)

Also check your MIDI connection. Can you run the global midi monitor and see what it displays when a rackspace goes dead?

I was going to aim at that also ;- 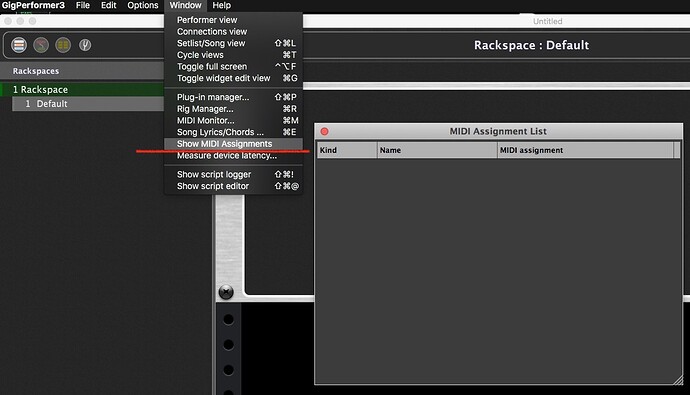 @EricD
I can see some x-touch knobs on the gig you sent…
Same knob to two functions, maybe?

ok, i think we are getting warm here… although its not quite clear yet, while i DO have an xtouch in my system… its not showing up in MY midi assignments… interesting that you can see it, and I can’t.

this is from my pc: (will send the screen shot from laptop in a sec) 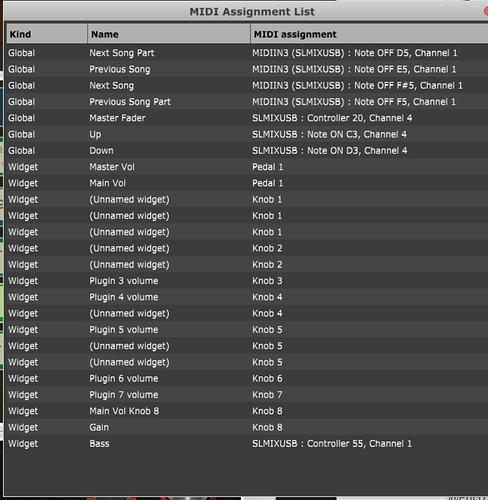 and here is the one from my laptop… is there way to clear all assignments, start from scratch? 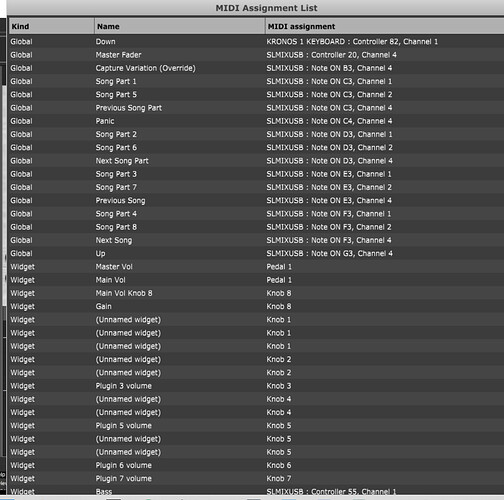 You can Clear all Global MIDI Assignments: 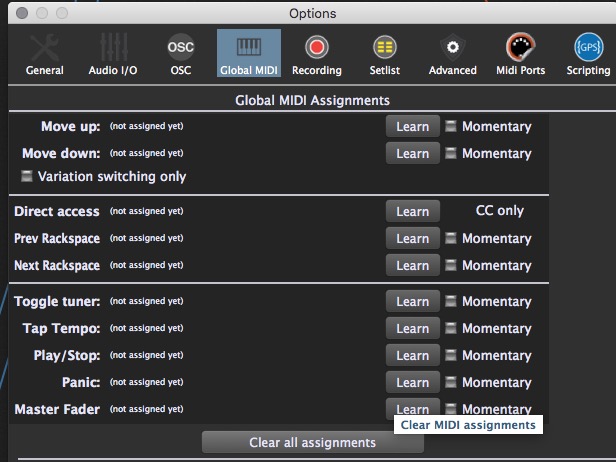 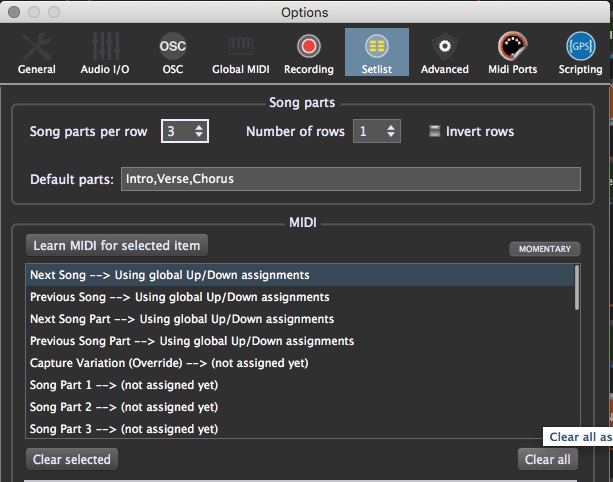 …the widgets ones I’m afraid not - would have to be done one by one.

one by one… Would that be going into each rackspace? or is there another way?

how about i reinstall gigperformer? would that clear all widget assigments? Or is any of the carried thru in the gig file?

one by one… Would that be going into each rackspace?

You have Rig Manager, that could help.

how about i reinstall gigperformer? would that clear all widget assigments?

I don’t think that would help. MIDI Assignments are per rackspace and saved rackspace/gigfile

another mystery, is that x touch… its not even in my ports, its even off right now. 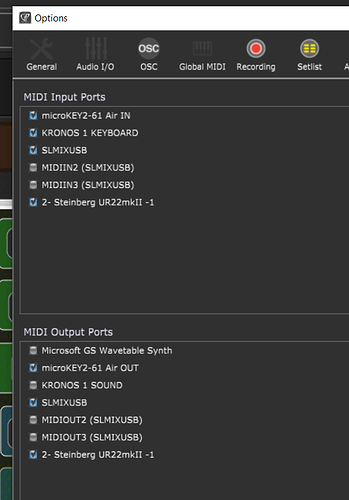 I have another theory… that i saved some of these rackspaces while 1 or more anti virus were on… and it corrupted the rackspace, is that likely?

another mystery, is that x touch…

ok, so thats MY Rig Manager associating things, so better forget that.
This is on my MacBookPro 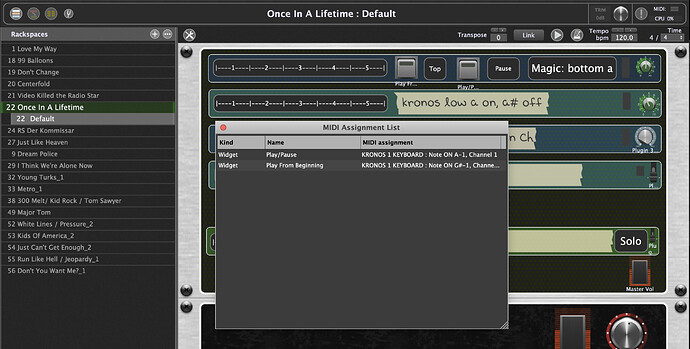 Nevertheless do check your MIDI assignments

well keyman, obviously you have good taste in gear

on to the theory… saving a rackspace while antivirus is on, possibly corrupting the file so it becomes unstable… should i go down that rabbit hole or look elsewhere? (i had just installed acronis as a backup system… didn’t even know it had AV, and already had norton, so there was 2 running.

Sorry, Im only on macOS…

What I can point is to this very well regarded ebook for optimizing PC:
https://gigperformer.com/how-to-optimize-your-pc-for-the-stage-download-free-ebook/

ok, cool. I did find something that is giving me hope… I have removed ALL assignments on my laptop. I was surprised to find that my foot volume was still working (connected to my kronos) … therefore if i had saved the rackspace, with the volume pedal down, AND Then i reload it (now the volume pedal is connected to my midi assignment in GP) there is nothing loud enough to hear.

The only thing that hurts this theory, is that on some patches, with the volume pedal off, i can see the meters still functioning in Komplete Kontrol, i would think I would have noticed that.

Maybe this is the root cause:
Are you sending out PC message from an MIDI Out like shown here: 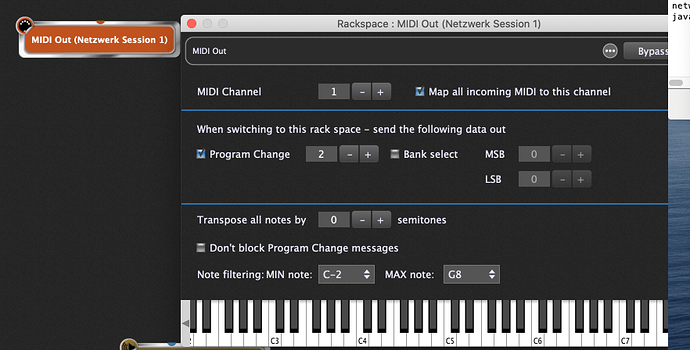 thank you pianopaul for the suggestion. I don’t use any midi out widgets.

Here is a screen shot of a ‘dead’ rackspace… honestly, they all look the same, i made a template. And 90% work. But when i reload the gig file… it will be ANOTHER rackspace that goes ‘dead’, and sometimes the dead ones come back. 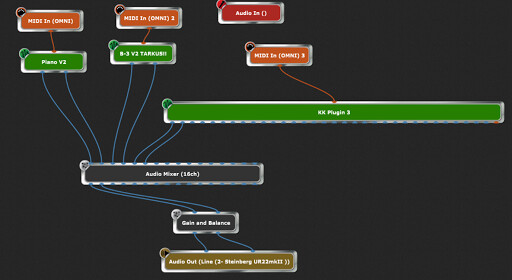