I think this is a bug, albeit one that would be hard for someone to intentionally recreate. But here it is, nonetheless: if you are using a recent Focusrite interface, as I am with my 4i4 3rd gen, and you have everything set up the way you like, and it’s working with GP no problem…if you then open the “Focusrite Control” app, and, under the “Output” section, change the “Loopback” setting from stereo to dual mono, and then exit the “Focusrite Control” app, GP tries to reload, but the machine crashes. I have never seen it crash like this–just a magenta screen for a split second and then reboot. Every time you try to re-load GP, it crashes/reboots the machine. Changing the Loopback from dual mono back to stereo solves the problem.

Every time you try to re-load GP, it crashes/reboots the machine.

That’s a driver issue — GP does not have any “kernel” or “root” code in it, it’s totally an application in userspace. If you’re seeing a reboot, then the only way that can happen is if a driver (which runs at kernel level) screws up.

By the way, great videos on your youtube channel!

I have the same interface and will say the drivers can be flaky at times. Mostly it works great but if you unplug the usb cable while GP is running it causes the dreaded Windows blue screen of death every time. I don’t make a habit of unplugging the interface when in use but sometimes it happens.

Yes, I have had the same experience, Focusrite send me a beta-Driver, but after a few weeks I was not paying attention and had a bluescreen. So I bought a RME Babyface Pro…

Yes, if your computer is rebooting or you experience a BSOD, that’s 100% a driver thing.

I also checked your recent video on YouTube, looks great

Not my experience (although definitely yours). Same interface: 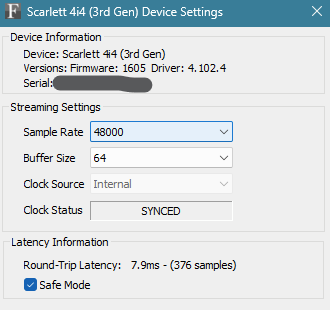 Just checked. GP is not very happy of course: GP turns red telling me that the interface is offline.

Thanks so much! The goal is to upload one a day. Just finished the latest one: Mike Rosenstark VLog Jan 2, 2023—Gig Performer #3: Solo Fantasia for Piano & Internet Radio Stations - YouTube

Cool, I already added them in this dedicated thread.

I have the same experience. Unplugging the Focusrite 4i4 gen3 while GP is running would always result in a BSOD. I got rid of the focusrite and went with an SSL 2+ (which is a great device!).

I’m on Windows, so that will explain the difference.