Novation 61SL MkIII controller vs. NI S61 Controller - which is better with GP?

I’m looking for a second keyboard controller (I already have an 88-key weighted keyboard). The second keyboard will be used for VSTs hosted on Gig Performer, mainly synths, and possibly guitar solos à la Marty Wade style, but I don’t want to go for the full keytar yet.

I have the Arturia V Collection 9 and NI Komplete 7, plus some Melda, Embertone, Spitfire, Sample Science and miscellaneous VSTs.

What say you, friends of GP? Would either of these make a good second controller for GP, or is there possibly another? I selected these two because they have the modulation and pitch wheels up front on the left hand side, which for me, is easier to reach.

Thanks in advance for your comments.

Native Kontrol is my best choice for semi weighted keys, I find it perfect. But using it with GigPerformer you lose most keys and two displays. You get only 8 pots and 8 buttons.
It’s perfect at home to navigate inside presets of Native and Arturia. In that case displays are really helpful.
Novation has a huge set of controls, midi mapped, so all available for GigPerformer. But I don’t know the keybed, where I am extremely sensitive…

I chose the SL MKIII over the S61 as a second keyboard and because it has more controls, but more importantly because you can control the displays (which you can’t really do with the SI61).

If the NI S61 gave the ability to fully control the displays I probably would have gone that route. But NI shows no interest in making screen control available. They’re nice if you’re content to use them exclusively with NI’s software, but they don’t do much for use with GigPerformer.

The SL MKIII display and buttons are fully accessible through a programming API. I’ve written a GigPerformer extension for it (which I’ll make freely available if you or anyone else wants to use or modify it. It’s up on Github, but I still have it tagged as private.)

The picture below is probably hard to make out very well, but I have the displays showing GP parameter names on each of the 8 knobs, the knob position, and the text value (e.g., -2db or whatever). The arrows to the left of the display can “bank switch” through however many banks of knobs you feel like creating for each rackspace. I have the buttons underneath the displays set up to select Rackspace/Variation/Song/Songpart and you can scroll through those with a different set of arrow keys. The names of the Racks/Variations, etc. are on the bottom lines of the display right above the buttons.

I find the keybed to be fine for semi-weighted synth style keys. 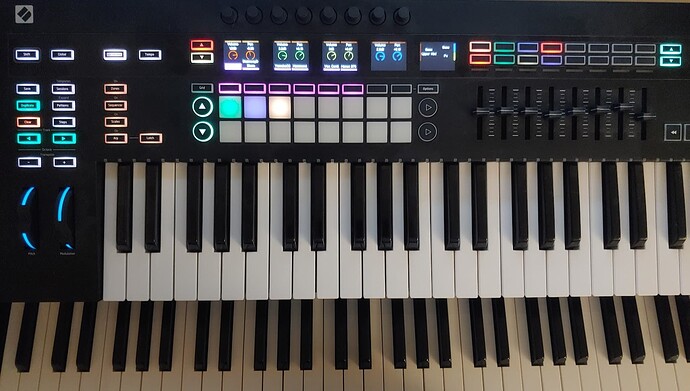 @Furio thank you for your response, and @Vindes, wow, you’ve really taken it up a level with your SL MKIII. I did notice in watching a demo video on the NI S61 that they only showed NI instruments. So your reply is exactly the kind of information that I was hoping to get from other GP users. I would love to learn more about your GP extension to make the SL MKIII display and buttons accessible from GP. Thanks for making that share offer.

It looks like a killer application.
Any way to show us details? A video maybe?
It’s enough to buy a Novation controller only for that reason

I’ve written a GigPerformer extension for it (which I’ll make freely available if you or anyone else wants to use or modify it. It’s up on Github, but I still have it tagged as private.)

Are you able to control the LED button state when the Novation is not using “In Control” mode? I have a template that I use with Gig Performer. Unfortunately, Novation does not allow incoming MIDI messages when the controller is in “In Control” mode.

Are you able to control the LED button state when the Novation is not using “In Control” mode?

Any way to show us details? A video maybe?

I don’t think I have a decent way to do that.

I did make the GitHub repository public, so anyone who has an SL MK3 and wants to try it out can do so. I’m new to GitHub so I will probably need some of the experts around here to give me some tips on how to get it set up properly.

The GitHub repository is at GP-SL-MK3 Extension.

That’s completely awesome Vindes… thanks so much for sharing the Github with the community!

Looks awesome! Is it possible to use Zones with InControl mode (and this extension)? Would be nice to see splits with led feedback on the keyboard.

Is it possible to use Zones with InControl mode (and this extension)?

Good question. I’ve never actually used any of the Zones/Sequencer/Arp type features on the keyboard so don’t know off hand how any of those work (or don’t work) with inControl mode.

The key LEDs are addressable through inControl mode, so I don’t think it would be very difficult to implement something in the extension to light key LEDs different colors to reflect different splits. This would probably be most practical if you’re controlling the split through GP rather than using the Zones feature of the keyboard.

Even better if LEDs addressable through InControl mode

I haven’t done splits in Gig Performer per se, but made them inside Halion VST. So basically I could just put 61 (invisible) widgets to each rackspace and click those on/off for right keys

Not most elegant solution but would probably work.

I’m getting a SL mk3 next week, but checked out pptx of the extension, everything is very well explained. Can’t wait to test the extension!