Hi folks, I’m looking for a way to solo individual MIDI channels so that all the rest that aren’t soloed are automatically muted. I know you could do that with the audio mixers too. But this has the disadvantage that the remaining channels are immediately muted when activated. But I would like them to only become mute as soon as I strike new notes. Apart from that, it would save CPU resources. I’m guessing this might be doable with scripting?
I have already solved switching individual Midi channels on and off with Midi Channel Constrainers and Midi Filters. 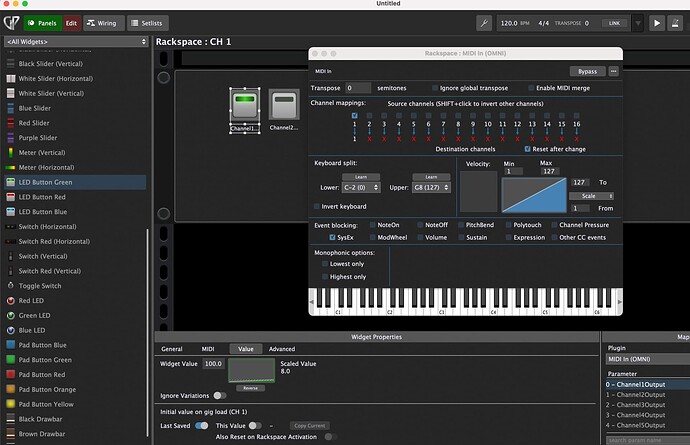 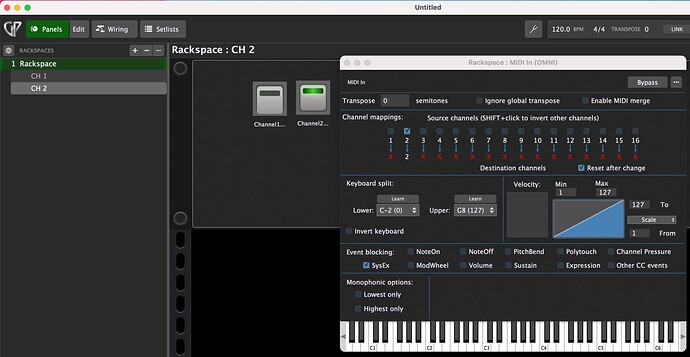 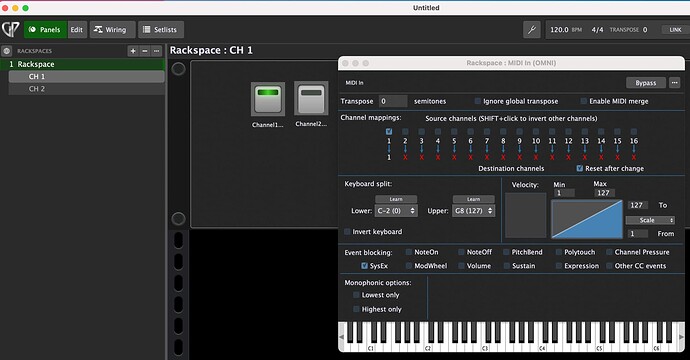 To get the complete idea, what do you want to achieve?
MIDI Divisi?

But I would like them to only become mute as soon as I strike new notes.

What is the goal you want to reach.
Please describe the goal without referencing to any things you think would be the solution.
Just what do you want to achieve.

I guess, it’s about not having cut pending notes when a channel get’s “muted”…
so filtering out only the NOTE-ONs might be the way to go.

You should think about the “poor man’s patch persist”.
Just use a MIDI Filter to filter out Note On messages.
In the forum there a some entries how you can do that.
Soloing MIDI Channels has the disadvantage that you get evtl. hanging notes.

I already use MIDI filters in exactly the same way to switch MIDI channels on and off. The only question for me is how can this also be transferred to a solo function so that all other unselected channels are automatically filtered out. Practically the opposite of switching individual channels on and off. Do you understand what I mean?
This should not result in hanging notes, because the note off information will continue to be sent everywhere.

Do you understand what I mean?

Sorry I do not get it…

I also talk about filtering Note On messages. I installed for each channel one filter, where I can switch on and of the Note on filter.

Does that not work?

This works by switching chosen channels on or of, but I want to press one ore more Solo-Buttons to activate one ore more channels and the others should get the Note on filter switched on.

OK, scripting is your friend.

Yeah, Pianopaul is right. I don’t think either that you can get an acceptable solution without scripting.
You should search for “radio buttons” to get some idea how you can do this (scripting and/or an extension).

For every other logic to handle this you’d have to think your own way through, because there might be many ways to go.

I’m not quite sure why you’re using multiple midi channels but it might be that the autosustainer scriptlet could be used, perhaps with tweaks, to do what you need.

For example I have a Kontakt instrument consisting of multiple patches, every patch addrassed at another MIDI-Channel or a Rack consisting of multiple VST-Instruments. The Idea was tp create something like the Combis at a Korg Kronos, where you can put up to 16 several programs (Sounds) together in a combi and there you can every channel switch on or of or put serveral channels in solo-mode, what all is realized by MIDI in the Kronos. Where can I find this autosustainer scriplet?

This gig file contains the Autosustain scriptlet which sustains notes automatically until you release all keys and then start playing a new chord. [AutoSustain-Gig-Performer-Scriptlet] There is an on/off knob, and a knob to stop the pending notes. Download: Autosustain_scriptlet.gig (62.9 KB) Credits: @LeeHarvey Discussion thread: LINK