Here’s a YouTube video I just uploaded showing how GPScript can be used to implement an AutoSustainer to sustain notes automatically until you release all keys AND then start playing a new chord. It’s an approach that I’ve depended on for years with several bands and had previously implemented it using the ‘borax’ objects in MaxMSP. Now it can be done natively.

There’s also an example of a chord recognizer and you can see chord names being displayed as I play the chords on a keyboard.

The script in this video also shows the syntax for writing functions. This stuff is all implemented and will be available in the next beta.

Happy new year to you all. Since the version 2.4 we have the object “AutoSustainer”. Please can someone post an example code with this new object?

Requires a MidiInBlock with the script name ‘MasterKeyboard’. Routing is just as if there were no scripting involved at all. Touching the PitchBend wheel stops all pending chord. Remove this callback if you don’t need it. 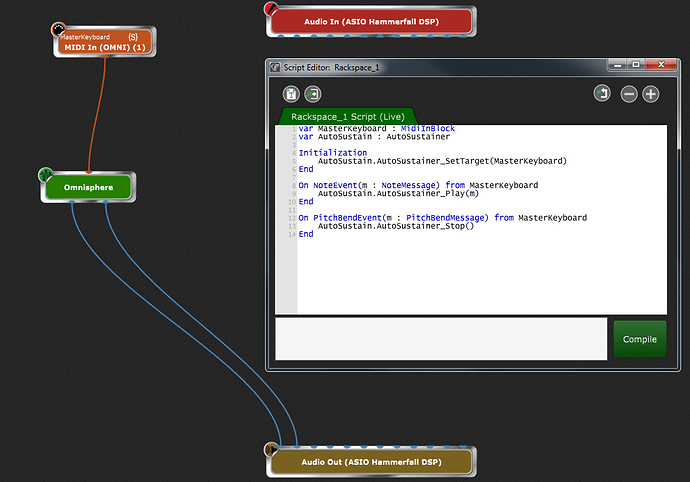 The only problem I see is when using a different MIDI channel than 1. What happens is that NoteOn events will be on channel (say) 5, but the NoteOff events are sent on channel 1. I guess that the AutoSustainer makes use of the NoteTracker internally which does not save the MIDI channel of incoming NoteOn events.

I’m looking at the best way to address that MIDI channel stuff for AutoSustainer.

Perfect! Thank you for your quick anwser. I tried to find a way that it works also with all the settings (velocity, key- and velocitysplit) from the MidiInBlock.

Here is my result:

AutoSustainer works beautifully! It’s now part of my standard rackspace, merged with my metronome volume script. I can turn the sustain on and off using a button on my Livid DS-1 controller.

Using the Autosustain Script from LeeHarvey which is absolutly great and works very well.
However, in my case when using this script the overall GP tranpose does not work any more, which I would still need.
Another (minor) thing is that after approx 3min holding the key, the sound starts to get deteriorated.
Any idea, especially for the overall transpose?

Another (minor) thing is that after approx 3min holding the key, the sound starts to get deteriorated.

Well, not much info from you to elaborate some advice (what plugin are you using, what computer, audio interface, it´s settings (sample rate/buffer size)

I’ll have a play with AutoSustainer to remember things…

Thanks for your effort in advance!!

approx 3min holding the key, the sound starts to get deteriorated

That’s either a plugin issue or your system has a wordclock sync issue. The only thing autosuststain does is hold up NoteOff messages

OK, thank you very much for your feedback. I will try to circle the problem by stepwise changing my setup.
Any idea for the overall GP transpose function?

Hello @pianopaul,
thanks for the feedack and the script. My understanding was to use it instead of the original script from @LeeHarvey. However, the new script seems not to stop any tones, which was a feature of LeeHarveys script and which is mandatory for me.
But maybe there is a misunderstanding: is your script ment only as starting point for my own programming to include the features of LeeHaeveys script? Or should I add your scripting to the orignal script somehow?
Sorry for still being new to GP scripting…

This script should only show how the global transpose can be used.

OK I will try to include that into my setup.

Thanks @pianopaul for ideas…

Sorry @MojoBass, a bit too much on my “plate” right now; I like scripts added functionalities, but I’m not that “fluent” so to speak.

Keep asking its a growing and vibrant GP community

I am heavily/happily using the autosustainer script from @LeeHarvey as shown above. It includes a widget to switch autosustain on or off.

What I am missing would be a second widget which stops the autosustain of the currently sustained note, however does not switch off the autosustain mode (i.e. when next key is pressed, the note is again autosustained).
Is there a way to extend the script with such a widget?
Thanks very much already in advance!

Thanks to the developers of GP for the possibility of scriptlets since version 4.
I have solved this for me more elegantly with a scriptlet.
Maybe one or the other can also use this.

I thought I had already provided this at some point, but have not been able to find it myself on the forum.

@LeeHarvey : Great!! Exactly what I was looking for!
Thanks very much for sharing!