I’m trying to control 2 instances (Program Changes and plug-in parameters) with only one physical controller (Behringer Xtouch mini).
I’m running GP 4.1.5 and have 2 keyboards : one Yamaha CP4 for pianos, EP, clav, strings… and one Viscount Legend Solo for organ and synths
I’ve found the benefit of running 2 instances to use 2 cores instead of only one instance. It works well and I would like to continue this way for my setup.

Now I would like to change program and sounds parameters with the Xtouch. No problem to do that for only one instance : sync, PC, CC, all is running absolutely fine.

I’m out of ideas

… Your help would be very appreciated!!

I think with OSC this would be very easy:

This way you just map your physical controller to the Widgets in the 1st rackspace and via OSC you control the widgets in the 2nd rackspaces.

Sounds a little bit complicated but is is not

You can see how to use OSC and Widgets in this YouTube. video 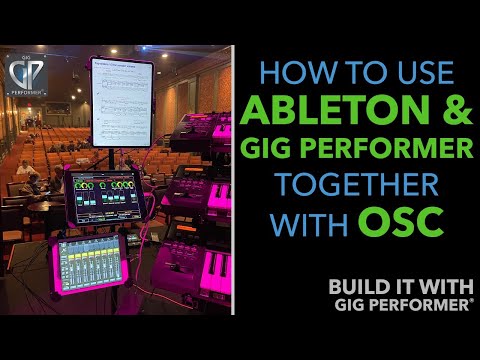 Thanks a lot I will check that and let you know.

Do you think it would be possible to sync the X-Touch with the second instance by doing this way?

With the widget approach it would be possible.
The trick is that the physical controller is only mapped to widgets in the 1st instance and widgets control other widgets in the 2nd instance via OSC.

Do you think it would be possible to sync the X-Touch with the second instance by doing this way?

EDIT: I tried @pianopaul’s approach with my X-Touch Mini and it worked (of course!)

@pianopaul you mean Instance instead of Rackspace isn’t it ?

@rank13 It’s exactly what I mean : some buttons and encoders assigned to Instance 1 (let’s say for X-Touch’s LAYER A) and some other for Instance 2 (for LAYER B). When I switch or change params on layers A/B, it should update LED status of buttons/encoders.

I will try to create a fake setup of 2 identical instances. Each instance will include 2 rackspaces in which : 2 pots (encoders 1 & 2) and 2 buttons (buttons directly below encoders 1 & 2).
Rackspaces will be switched with the two left buttons of bottom row on X-Touch.
Instance 1 should be controlled with LAYER A.
Instance 2 should be controlled with LAYER B.

Should I create widgets for Layer B in the Global Rackspace of Instance 1 ? How should I configure OSC params for these widgets to send messages to control Instance 2 ?

How should I configure OSC params for these widgets to send messages to control Instance 2 ? 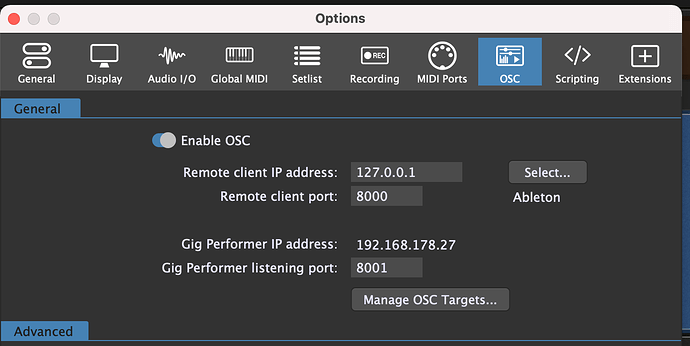 So in your 2nd instance make sure the Gig Performer listening port must be 8000
Be careful not to set the port to 8001 for Remote client port in the 2nd instance:
This way you would create an OSC feedback loop!

Thank you pianopaul, it works. I’m starting to understand the OSC philosophy.

In your example, it’s a master/slave configuration. Actually, it’s a kind of “simplex” communication. When I turn the knob in global rackspace in MasterOSC, it moves the SlaveOSC’s one.
I’d like to move MasterOSC’s knob from SlaveOSC.
Would it be possible to achieve this without making a feedback loop ?

I fear, currently it is not possible to avoid OSC feedback.

In fact, OSC and MIDI are working quite the same way. What didn’t work with LoopBe1 had no chance to work with OSC…
I experienced the same problem with LoopBe1. I succeeded in doing a master/slave configuration with 2 instances but no way to have a “full-duplex” communication between the 2 instances without causing LoopBe1 to crash (with loopback).

What I don’t understand is how the “sync” function is working in one instance. It’s also a kind of loopback isn’t it ? If I knew how it is implemented maybe I could try to do the same between two instances…

But finally, why the X-Touch mini can’t work in 2 instances at the same time ? It would be so much simpler

I am using Ableton Live together with Gig Performer and they are synced by a M4L patch.
There was also the issue with feedback loops and I avoided them in putting in a gate function in the M4L patch.
I think the developer implemented similar in GP dealing with MIDI.

I am working on a script based OSC sync to avoid OSC loops.

After reading here and there on several forums, a possible approach would be that the controlled knob doesn’t echoe the MIDI/OSC message to avoid loopbacks.
Maybe it could also work with some kind of interrupts/flags : when instance 1 send a message, a flag is raised which allows instance 2 to receives and update the knob status but prevents to send back the message to instance 1 since the flag is still raised. Flag is reset after a few ms. Same trick for instance 2 to instance 1. This would be a kind of “half-duplex” communication.

If you manage things in GP Script you could send a specific flag message before the widget value messages.

The issue is: When to clear this flag?
I think I found a solution, can you please verify?

But finally, why the X-Touch mini can’t work in 2 instances at the same time ? It would be so much simpler

You mean, apart from switching to a Mac?

All I needed to do in Bomes was draw connections between the ports to allow bi-directional comms.

Hmmm… Master controls Slave but still unable to control Master from Slave.
OSC is enabled for each knob in instances

Here is the OSC setup : 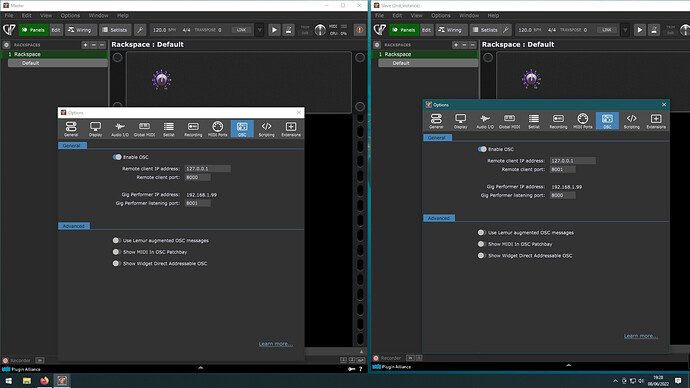 Made some additionnal fiddling… And it seems to work !!!

Here is the setup : 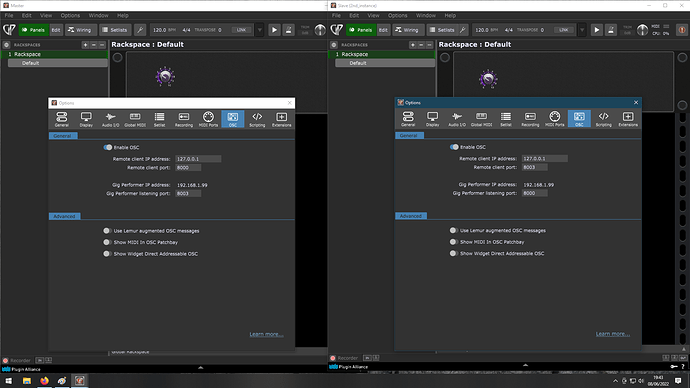 I’m diving into OSC linking on the 2 instances.
I’ve duplicated the layer B layout of my X-touch controller in the global rackspaces of both instances.
Layer A is for controlling Instance 1, layer B for instance 2.
It works like a charm.