Does anyone on this forum have Luna Display and are using it with Gig Performer? I have a MacMini and a IPad Pro that I would like to use as a monitor. I have tried using Air Display which works fine but the IPad won’t work as a touch screen with it. I also bought TwomonUSB and the IPad does work as a touch screen however for some reason when I use Gig Performer occasionally the sounds glitches and audio drops out momentarily. This doesn’t happen when I use the software instruments in standalone mode. But yes I would be curious to know if anybody here has used Luna Display and what their experience was. Thanks!

what is Luna Display?

Some time ago I used Duet and this was working fine.

I have Duet and it’s doing something that developer calls letterboxing. It shows the MacMini display but is not using the entire IPad screen. Luna Display comes with a dongle which has to be used in order for Luna Display software to work.I have heard it’s supposed to work real well with making the IPad Pro capable of being a remote touchscreen monitor for the MacMini. So I was curious if anybody has used Luna Display here

I don’t know if @ahutnick has tried Luna yet or not. I just hooked up my new Luna Display today to my Mac Mini and ipad Pro…Amazing! The touch screen capabilities are exactly the same as normal iPad use. Switching between the Mac display and normal iPad display is flawless with an upstroke from the bottom of the screen. It eliminated the need of using Midi Designer Pro2 or Lemur because I can control all widgets and screens by touch or by USB mouse. I connected via USB and the iPad stays charged during use. It will connect via wifi also.

It’s only been in use for about an hour…so, I’ll report back later with any problems or glorifying reviews.

There seems to be some controversy about the future of this product as Apple seems to be working on a similar concept.

Really, did you see a news about it? Will it work for both Win and Mac?

The comments of this article 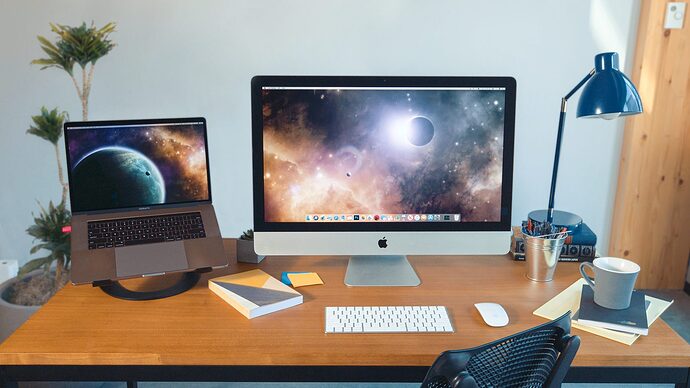 Luna Display, the popular accessory that lets you wirelessly use your iPad as a secondary display to your Mac, is expanding with a new Mac-to-Mac mode.

While Sidecar is no more new in 2021 (the article is from 2019), I didn’t see anything controversy, but perhaps I did’nt understand it.

And they have a Win HDMI dongle in preparation (very few CPU required?) with a latency of 16ms (hopefully glass-to-glass) which is very very good.

First (and only…so far) negative stumbling block. I’m trying to figure out how to boot up the Mac Mini with only the iPad connected and be able to see the screen results of the Mini. So far, I have to turn on the Mini with an external screen in order to start the Luna Display app on the Mini. Then it will link with the iPad and all is great.

Is there a script or something that I can use to start the Luna Display app upon startup? I’m VERY new to Macs…so I’m in an extreme learning mode.

Other than this problem I’m having a lot of fun!

Thanks for that info. Great to hear that it works well! I haven’t bought it yet but I will. Sidecar if I understand correctly requires wi-fi so you would be SOOL if you were performing somewhere with poor wi-fi. Also sidecar doesn’t work in headless mode with a MacMini so no use to me

For what it’s worth, I carry my own WiFi router in my rack, so independent of the venue

Good idea. Still sidecar won’t work for me in my situation. Also being that Luna Display works with USB as well I’d probably go that route playing live.

It’s working well with USB…once I figured out the boot up problem. Another thing I had to do was turn off using a PIN to log in.It’s so nice having a touchscreen now too.

Good to know that !

Hi, just wanted to ask how the Luna display is working for you now, a year later, & if you’re in Monterey &/or apple silicon. I’m trying to decide if I go the headless MacStudio route or the Macbook when I get a new machine.

Hi @ram …So far it’s working out nicely. The iPad Pro works really well for my monitor (touch when I need it). I have enough room for my Chords/Lyrics page along with control panels of my widgets and set list page.

There has been only one time when Luna didn’t load properly on my Mac Mini and I had no way to access it. It turned out to be some bug that the folks at Luna promptly fixed. Luckily I have piano, organ and synth apps on the iPad and with some quick wiring changes I was up & running without too much delay.

I have seen some other alternatives for using the iPad as a monitor (I can’t think of their names at the moment), So do a little research before diving in. But, for the most part, I am pleased with my setup at this time.

Another nice feature is that the iPad is still fully functional while acting as the monitor. All I have to do is swipe up from the bottom and there is the access to whatever is on the iPad.

What’s the difference between using Lina and using an app like Jump?

I’m not sure. That may be one of the other apps I’ve heard of since getting the Luna. It may be worth looking into. Right now I’m invested in my Luna and pleased enough not to really search further at this time.

Their argument was at least very low latency.

Thanks @jpt I’ll definitely consider this, & I actually am ok using it with a cable if it means better performance. I’ll probably try it out with my 2019 macbook pro while I figure out how I can afford an $8k maxed out Ultra.