Take a listen to the beginning of this song, around 10 seconds into it — there’s an arpeggiator running there that I need to try and duplicate. I tried, Cthulhu but it doesn’t seem to have the octave range that I need. Anyone know of an arp that can sweep 3-4 octaves?

You could try this 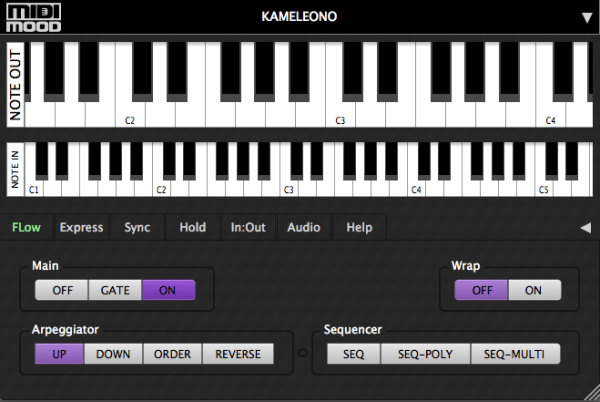 If I hold a chord down, can it arpeggiate the notes of that chord through multiple octaves?

Use this VSTi. It can play the chord extending to 5 octaves.

Does this work on Mac also?

Did you try and it is not working?

Just did a quick test, seems you can define your own Midi as a pattern and when you define a chord this is used as arpeggio of the octaves you define in the pattern,

Windows only, I need mac

Yeah, I tried that one but I couldn’t figure out how to work that one (sigh)

I ended up using a hardware synth to create the arpeggios (over a four octave range) which I then just sampled into Kontakt!

MIDIMood: I faced the same issue and the user documentation is not easy to understand

Kameleono looks very interesting — it allows for a continuous changing arp pattern — very useful but in order to pull that off you need to feed it MIDI. They imagined you would use this inside a DAW where you can route MIDI from one track to another. I suppose in GP we would need a way to pull in MIDI notes. We might need that new MIDI Player block feature, synched to the play clock. I suppose you could have your DAW running in the background (Ableton Link).

I pulled off something like this using BlueARP but it was complicated and I’ve found that plugin to be buggy. BlueARP has the advantage that you don’t need a separate MIDI stream coming in, but Kameleono has the advantage of being simple and intuitive and ultimately more flexible.

In the plugin you can choose patterns, I think it shoul be possible without a need for a DAW.
So it should work within Gig Performer.

Yes, I calling that, “playing”

Omnisphere has upgraded their ARP in v 2.6 and you can export the sequence as a MIDI file (that can be further edited) to feed anything. Would this work for you?

If only GP had a MIDI file player built in!

I’ve read through this forum. I like what Kameleono (what a name!) has to offer. BUT has anyone actually tried it on GP4? (it reads like it should work, but at $49, I just wanna make sure before making the commitment).
Anyone?

On forums and various groups I read that this one is regularly updated and works OK.

(documented in English, Russian and German)

I had a minor issue with BlueARP → BlueARP users here?

Besides this it works very well.

Seems I cant get BlueARP “recognized” (unauthorized and hence deactivated) on my Mac M1 (2020). Tried the older versions too. Same problem.