Hi, I have a question for the group. At about 30% of the venues I play at, an electrical noise is introduced to my audio chain if my laptop’s power supply is plugged into wall outlet. However, If I unplug the power supply from my laptop, the noise goes away. Noise is similar to a DI that has ground/lift switch set to wrong position. Here’s my hardware chain:

Any ideas what is causing this, and if I have a way to clean up the venue’s power on my end?

That depends on your region.
Where are you from? US?

It is probably a power supply ground loop problem. If your laptop power supply has a connector with ground, try to put some adhesive tape on it to isolate it from the ground.

From people in the US, I often hear thatcher are using special power conditioners to avoid these problems. A known brand for that is Furman.

If isolating the ground of the laptop power supply brings something, you can use something like an Ebtech Hum X

I’m an electrical engineer, and after messing with these ground hum problems for 30 years the only useful insight I’ve come away with is to carry around a couple transformer isolators.

The ART DTI boxes work well for me. They handle a stereo pair and will take XLR, 1/4", or RCA. They’re built like tanks. “Ground lift” approaches sometimes work, but I’ve had better luck with the DTIs.

[edit: those Ebtech (Morley) products David-san mentioned above do the exact same thing, electrically speaking, as the ART DTI I mentioned. I looked at those and bought the ART just because I had positive prior experience with other ART devices.]

I have had excellent results with the Behringer MicroHD HD400. I was hesitant at first because it didn’t really seem to cover the type of noise that laptop power supplies emit (that bits and bytes high pitch stream), but because of the relatively low price I gave it a shot. I have to say I was amazed by the difference! From a pretty much unbearable stream of high pitch noise to virtually nothing.

Thanks for all the suggestions. It sounds like a need a hum eliminator, so I’ll pickup one of those. Also, I will probably retire my Direct Box and use balanced outs of my audio interface (trs to trs) into stereo hum eliminator and then trs or xlr out of hum eliminator into mixer’s xlr inputs. Hopefully that will fix the strange pc noise that happens at some venues only. Again, thanks for the suggestions.

I’m a little late to the party, but my experiences touring Asia and dealing with the multitude of different power situations there taught me to carry three things with me to deal with electro-static or electro-magnetic interference (different and kind of the same):

This combination of capabilities has let me fix a good number of squirrely power issues coming from “dirty” AC power (and what I believe is a bad chassis ground inside my Receptor) despite the fact that we run through one of the 150lb big-boy Furman conditioner/converter units.

Cool. With who do you tour? What kind of music?

I serve in a military music unit playing everything from solo piano for dignitaries to big band in Tokyo to pop covers in theaters to dragging my rig into a dirt lot plugged in to wacky power in Cambodia and hoping everything doesn’t blow up while we play pop music for schools in places that almost never get to hear live western music.

Thanks! I ordered an ART DTI and will get a chance to test it this weekend. Thanks for the other great ideas as well.

Heh. Seems I’m REALLY late to this party. But instead of opening another similar thread, maybe I write here.

I have a mini PC (Shuttle XH410G) and a Motu M4 USB audio interface. The computer has a laptop-style PSU, so as expected there’s enormous noise in the outputs when connected to a PA in a rehearsal room or on stage.

I managed to control this with an isolator box from Behringer (HD400 - https://www.behringer.com/product.html?modelCode=P0387) which is okay for the time being, maybe I will upgrade this to a higher quality transformer gadget.

What I noticed is that there seems to be some MIDI voodoo going on, probably because of the ground loop I eliminated with the HD400 at the output but not on the rest of my electrical system. Flickering MIDI activity notifiations in GP, some notes not played. I connect the midi controller keyboard to the Shuttle PC by USB cable.

Few days ago I rehearsed with my “small luggage” wchich consists of a late 2013 Retina MacBook pro - same interface, same controller keyboard. I had the same problem as with the Shuttle, MIDI haunting included. Sadly i did not check how it is with the PSU unplugged and running on battery. Will do that soon.

After some reading in the world wide web I now have the suspicion that the typical European “protective ground power plug” could be the problem. Disconnecting the ground wire is generally frowned upon (and pretty much a No-Go insurance-wise here in Austria), so I ordered a PSU for the Shuttle (19,5 V, 4,74 A, 90 W) that has the standard 2-prong plug like reading lamps and so on, you know what I mean.

Since this PSU will take about 2 weeks to arrive at my door step, I ask: Do you think this could be the solution?

There’s also USB isolators - but für USB 3 high speed interfaces something like that will set me back some 600, 700 Euros. Likewise a UPS - similar price if I calculate the worst case: 3 hours @ 90 Watts.

I went through this same thing. This did the trick for me…works really well. 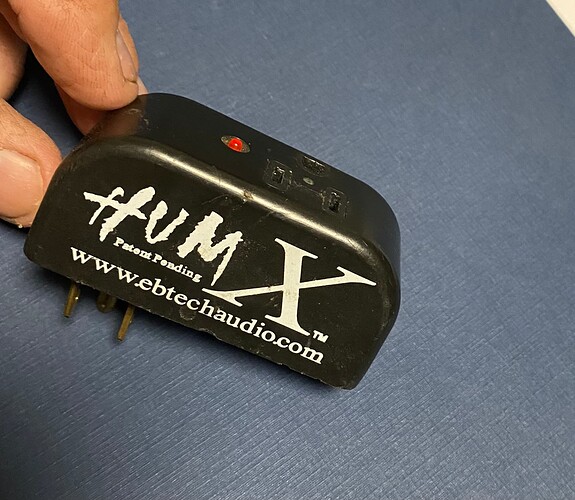 THanks for the quick answer! What does this thing actually do, if I may ask? Seen it quite a few times here in this community. I ask because I already I have a pretty expensive power strip with power filtering and overvoltage protection which, alas, does not help in my case.
I have a Forman-Lookalike “power conditioner”, too. Should I try that?
The “HumX” looks promising - but seems to be available only overseas. Hm.

but seems to be available only overseas. Hm.

I’m not exactly sure what this does electrically, but I was having the identical problem. When using the power supply there was a very noticeable “ground loop” noise. Unplug the power strip and it disappeared. One day I was discussing this with my Sweetwater salesman and he suggested this. That was 10+ years ago and no problem since.

Thanks! My amazon-site (Germany, since Austria doesn’t have one) says “unavailable” - but Google shows enough sources, I’m sure there is a European one there.

What does this thing actually do, if I may ask?

From people who have torn the Hum X apart to examine what it does, it’s almost a simple ground lift device. It uses two diodes wired in parallel, but pointing in opposite directions, to separate the earth ground from the wall outlet from your gear.

The two diodes wired in parallel but in opposite directions is effectively a short if the voltage difference between the two grounds exceeds about 0.7 or 0.6 volts (depending on the diodes used).

It would be obvious from external testing that’s what’s going on, and it would register on any kind of plug tester as a fault (for lifting ground) if that’s all there was to it. To make it pass the fault testers there is also a resistor in parallel with the diodes. It’s a high enough impedance resistor to stop the low level ground loops from humming, but low enough that it gets past the simple fault checkers.

Where you could theoretically run into problems with it is if there is an actual electrical failure with your gear. The diodes in there are only rated for 6 amps, which is why you’ll see those 6 amp comments. That limit only comes into play if something shorts you “hot” line to earth ground. That’s going to fry the diodes in a microsecond, and at that point your unit is fried. Fried in the sense that it’s never going to do what it’s supposed to do again. However, the general failure mode for diodes is to fail as short circuits, so in theory when a Hum X fails it fails by shorting the ground from the wall to the ground on your equipment. It other words, it fails by becoming a simple pass through circuit. That’s how diodes are supposed to fail, but if they fail open you now have a simple ground-lift and all the risks that come with that.

I am neither advocating nor slighting the Hum X. It’s basically a much safer ground lift device. Definitely an improvement over “just cut off the earth ground prong” but in situations where ground lift doesn’t fix your problem I wouldn’t think the Hum X would either.

For what it’s worth, the EbTech Hum X is now the Morley Hum Exterminator, so you can try searching for that. I don’t believe they make a non-US version.