How to use midi out

I’m using a non standard midi controller (PS3 Guitar Hero) that I want to set an octave higher. If I use the midi in block set to +12, the plugin won’t respond. I found the midi out block and it also has a midi transpose. But it doesn’t have an output, only an input.
So my questions are:
1 How is midi out intended to be used?
2 Is there another way to raise the midi note data at the output stage (I’m using Kontact 5)

If I use the midi in block set to +12, the plugin won’t respond.

I don’t know to which plugin your midi in block is connected but if it doesn’t respond when you transpose up your midi events then your plugin is probably a sampler that doesn’t have any notes defined an octave higher.

Midi out blocks are for communication with external synths.

Got it! Thanks for the explanation. The guitar controller makes the onscreen midi keyboard notes move ok, but they are just one octave too low. I’ve looked for a midi vst transpose plugin, but didn’t find much available.

The MidiIn Block is doing transpose. Given what you said though, it sounds like the synth plugin you’re using doesn’t respond if it receives MIDI notes that are an octave higher.

It may be that the synth itself can be transposed up an octave.

The plugin I’m using to make the sound is Kontact 5. Does it have a built in midi note transpose?

Ah, you are using Kontakt. So probably there are no samples associated with midi note numbers 12 values higher. That’s often the case.

Instruments inside Kontakt do have a “tune” knob hat can go up or down up to 12 semitones but it is my experience that tuning up by an octave will sound terrible for anything other than a basic pad. Such is the way with samples. For example, if you open the “Bassoon” instrument (click the spanner on the left) you will see the tuning knob on the right (green arrow).

If you try to tune up by an octave, it will sound horrible. 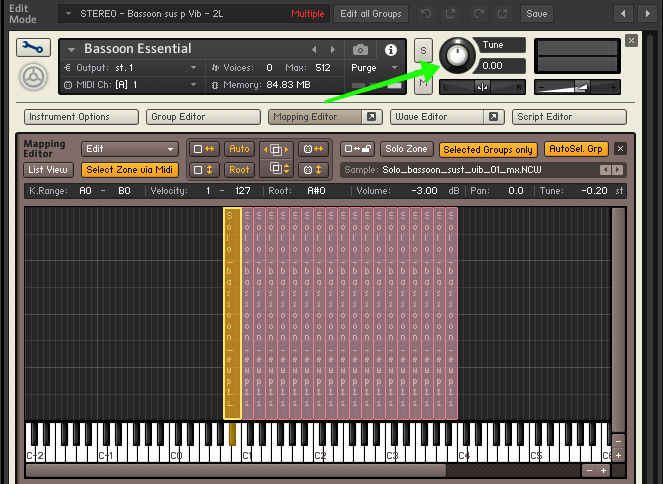 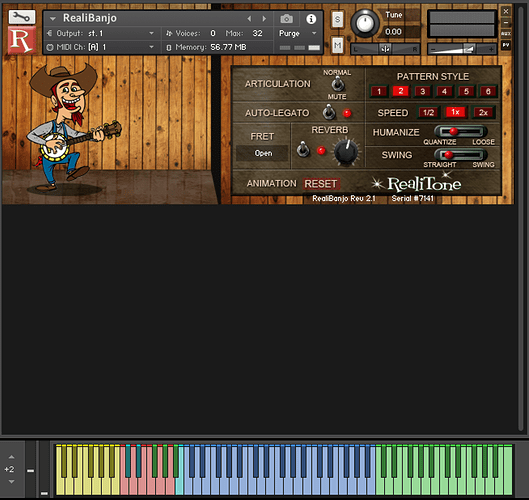 It’s not audio that I need to transpose. All I need is for the midi notes to trigger one octave higher. The vst is a banjo which has set keyboard zones. The upper zone I need to reach triggers a pattern player when chords are played. It doesn’t make any sound until a triad is played. So I’m guessing that note data alone is generated by this upper zone and the built in pattern player responds by using its own set loops.

Being basically unfamiliar with Kontact, I wondered if there was a way to move the digital info Kontact receives upwards by one octave so that the pattern player can operate.

For anyone interested, the plugin is from Realitone and is called Realibanjo. It’s on special at the moment. Looking at the screen shot, the blue keys play notes, and the upper green keys trigger the pattern player. I need my guitar controller to reach the green pattern trigger notes.

Yep – with a MidiIn Block! 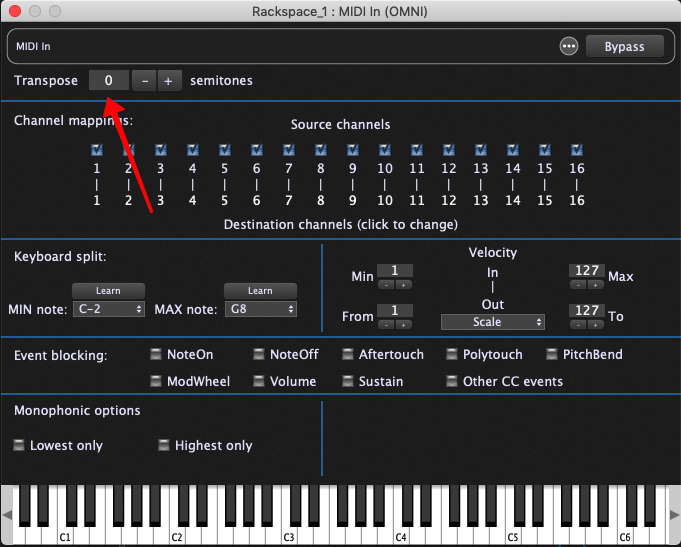 If the plugin doesn’t respond (per your initial post) then there is something else going on but transpose via a MidiIn Block works perfectly fine.

Thanks. I guess we will have to leave it there. The midi in block transpose just doesn’t work for my guitar controller. But thanks again for the input.

The midi in block transpose just doesn’t work for my guitar controller.

If you see one note in the global and a different one in the “local” one that matches your transpose value - everything works as it should and there is something else wrong with your setup. For example - check the midi channel.

I have one last option and that is to use Bome Midi Translator Pro. I will report on how that goes.

the local registered zero ie no information at all

This means probably that the MIDI in block you are monitoring is not the one of the controller you are using! What happens if you change the transpose to 0 semitones? Nothing I guess… Did you try with MIDI Omni like what @keyman did?
Could we see a screenshot of your connection view with both the global and local MIDI monitor displaying a note on message from your controller?

The problem is this: the midi controller is not a keyboard. If I plug in a keyboard, the transpose works fine. As I’ve mentioned in the past, the guitar controller is a PS 3 Guitar Hero using five buttons to determine chords as a guitarist would voice them. I’ve been in touch with the software developer of the banjo vst, and they have an update due soon which will allow the keyboard zones to be swapped around. Hopefully then it will work;)?

I’ve just has another thought. Is this the sort of problem that writing a script might solve?

The problem is this: the midi controller is not a keyboard.

The problem is that you want to solve an issue asking other people and still doing something else.

please take the time to answer our question.

Whoops! Ok, sorry. Will do that at the next session.

Could we see a screenshot of your connection view with both the global and local MIDI monitor displaying a note on message from your controller?

Here are the screen shots. The one with info in both MM does not have transpose actioned.
The one with one blank window has global transpose +12. 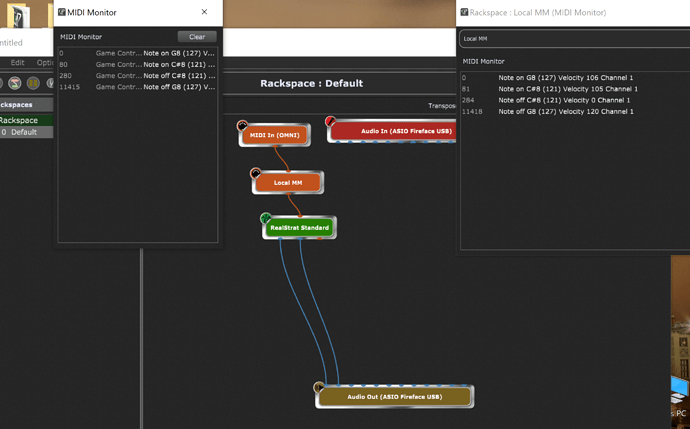 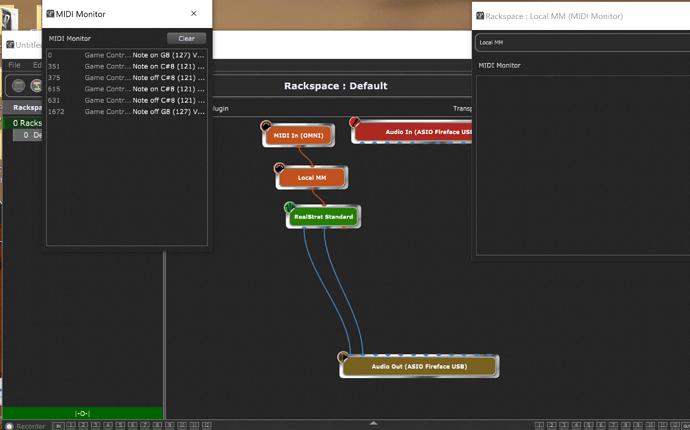