I would like to use this script to automatically start the midi file player on the next 1 of the next bar.
Automatic start of a midi file. Also pasted below.

However, it is using a widget input to trigger the script. I have midi learned in the global midi settings my pedals to the NEXT and PREV song parts. I would like that to trigger the same script. In other words, when I press NEXT or PREV on my pedal, I would like it to switch on the next bar’s 1. How do I write the script to capture that incoming midi CC? Sorry, my scripting knowledge is still very limited. It is not a widget, nor a midi block so I didn’t how to declare variable. Thanks!

// Called when a single widget value has changed
On WidgetValueChanged(newValue : double) from NPART
if newValue == 1.0 then
SwitchPart = true
end
End

Bad news: I haven’t solved it yet
Good news: I finally realized I should not waste more time thinking about how to declare it, because it probably doesn’t need to be declared. It is already assigned in the global settings, so a part change is going to happen upon pressing the pedal, so the question is how to delay that change to take place at the next bar 1? If of course what I’m trying to delay has already happened, its useless. Is it possible to have that global midi assignment for part change AND listen for that CC and not allow the part change to take place until the next bar’s 1??? Or would that require un-assigning the global midi setting to change parts (which I don’t want to do since I use that is my normal operation, I only want this delay to the downbeat when using midi file player).

This is what I got so far which does nothing:

So my brain is running around in circles, need help! Where is everyone today? Responses are usually very quick in this forum… LOL

When you have things defined in Global Midi options then those messages are not available elsewhere in GP. So you’ll likely need to manage everything via scripts and possibly widgets in the global rackspace.

Ha! Ok, so my hunch was right that I will have to un-assign that global setting. Ok, sad, but makes sense.

Where is your MFP? Global Rackspace?
The other thing to consider is do you really want both the song part change and MFP start to be quantized to beat 1? It may be better to keep the song part change manual so you can trigger it just before the beat, so that your new song part/variation is ‘ready’.

Yes. Right now that’s being triggered to play with CC in the song part switching itself. 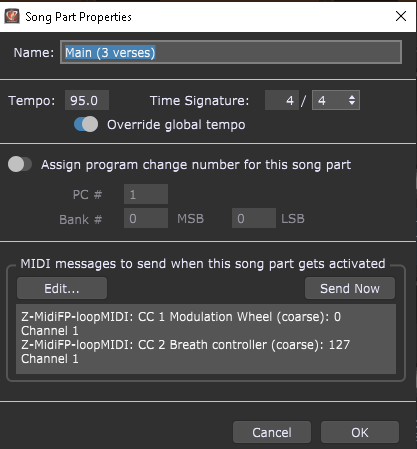 The first line choses the song, the second line turns widget on that starts the PLAY function. I had to do it this way b/c when it was just relying on the widget state in the variation, it was getting the widget PLAY message first and song part second. Never started to play. Once I put them both here, works fine.

It may be better to keep the song part change manual so you can trigger it just before the beat, so that your new song part/variation is ‘ready’.

Sure, that sounds good as long as it doesn’t stop the playing of the current song.

Try it with your current set up first.

In the global rackspace script editor?

It works! You know it was bound to since we both picked CC51 for next (before I even got your message). LOL

Now how do I go backwards to PREV song part (w/o creating a copy/separate message with SongPrevPart)? I’m guessing there is a more elegant way of doing an IF 50 PREV if 51 NEXT?

Now how we go backwards to PREV song part?

Do you need to? Song parts are just pointers, so you can duplicate the same part and position it where you need to.

You can then either duplicate the On ControlChangeEvent again, or it’s also possible to manage everything within the one using if/then/else.

Thanks so much! I’m glad you sent it b/c it was not letting my copy the “on BeatChanged” as it was defined already. I was messing up the If / else … Works great!

I’m very happy with this already, but … is it possible to press two or three times to bypass parts? If so, how difficult is it to accomplish that? If it is not easy, I’ll just use touch for those extra rare times. I’m pretty sure that won’t be needed much.

is it possible to press two or three times to bypass parts?

I’m sure it’s possible. But you’d have to manage a counter that increments/decrements with each press, and also a widget to communicate this to you so you know which one you’re about to switch too.

Gotcha! This is great for now! Thanks for your help again!

Can’t wait to get more proficient at scripting!