I just saved gig performer, the name of the file is gig performer 8 10 22, when i try to open it, or any other, i get the window that says do you want this program to make changes to your computer, even if i click yes, the file fails to open, the only way i can open gig performer is to click on the file that says (gig performer) nothing else.
I wish i could post pictures to this forum
The problem is, that gig now has about 150 presets, and is now crashing when i try to add more

You can post the gig file here… I’m on Mac OS can try to open it.

Is that the name of the gig file or did you actually change the name of Gig Performer itself?

Just the name of the file, i posted it here, but i always get the same message for every saved named file, the only one I can open is just called Gig Performer 3

i get the window that says do you want this program to make changes to your computer,

This window appears usually when the main executable changed or when you set the executable to run as Administrator or your computer is infected with malware.

I wish i could post pictures to this forum

What is stopping you?

I opened your attached gig file normally (Windows 11 Pro and Gig Performer 4). Only windows that appeared are ones that stated that backing tracks are missing for rackspaces.

Just to support the community with the screenshot which @davepine uploaded on facebook…
looks suspiciously like a malware infection to me: 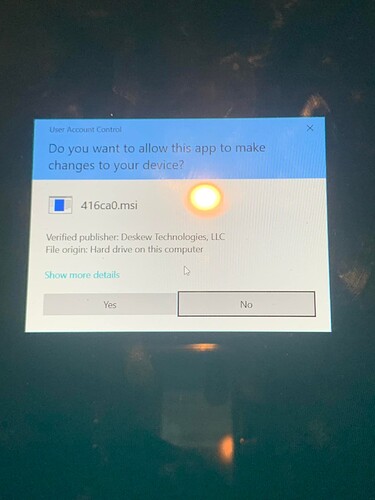 I don’t think that this ominous *.msi belongs to Gig Performer in any way…

Yes, as I suspected (and @schamass observed), your system has probably been infected.

The reason you can open “Gig Performer 3” is because that is the actual executable.

The others are all gigfiles and the file association for .gig has been changed on your computer so that instead of gig files being associated with “Gig Performer 3”, they are now associated with that msi file which is probably malware as well.

You’ll need to get some advice from anti-virus/malware experts to address the problem on your machine. It is not a Gig Performer issue.

Unbelievable, that computer never goes online, leave it to windows

But where does the software come from which is installed on it?
Somehow something got corrupted… i guess it’d be best if you would check your hardrive for malware with something like this:
Antivirus Live CD download | SourceForge.net

Malware bytes is another good option

That can’t be true. How did you activate Gig Performer?

I scanned with malwarebytes… 0 detected… umm… next theory?

I just had to put it online to run malwarebytes… before that, it’s been years since i went online

it’s been years since i went online

Then how did you activate Gig Performer?

I don’t have one — it’s clear what’s wrong, i.e. double-clicking on a gig file is trying to open the wrong file so your file associations are screwed up, but I don’t know why that would be other than some other program changed those file associations.

Are you a Plugin Alliance user?

I own gig performer 4, not sure where i put the serials or down loads, but if i install that, do you think it’ll cure my problem?

I also went into the system to try to optimize things, from instructions people posted here, i coulda screwed the pooch when i attempted that also i suppose.