FREE e-book by Deskew - Optimize your Windows PC for the stage!

This is great, and it just comes in at the right time, since i am about to finish my “Suitcase-PC” project over the next days… it is set up just for making music ad now it also will be optimized according to the guidelines of this tutorial. I am really looking forward to getting that machine to run.

I put the epub in my kobo aura h20 to leaf through when traveling.

A little nitpick while we’re at it: I did not check all pages, but screenshots are truncated, therefore the font size needs to be decreased.
That is not annoying on my 6.8" screen, but that could be the case on a smaller ereader.

Anyway, when optimizing a computer, one does not need an ereader

And first of all, thank you for this gold nugget : I am used to optimize my pc, but I believe that this book is the most authoritative and comprehensive reference. 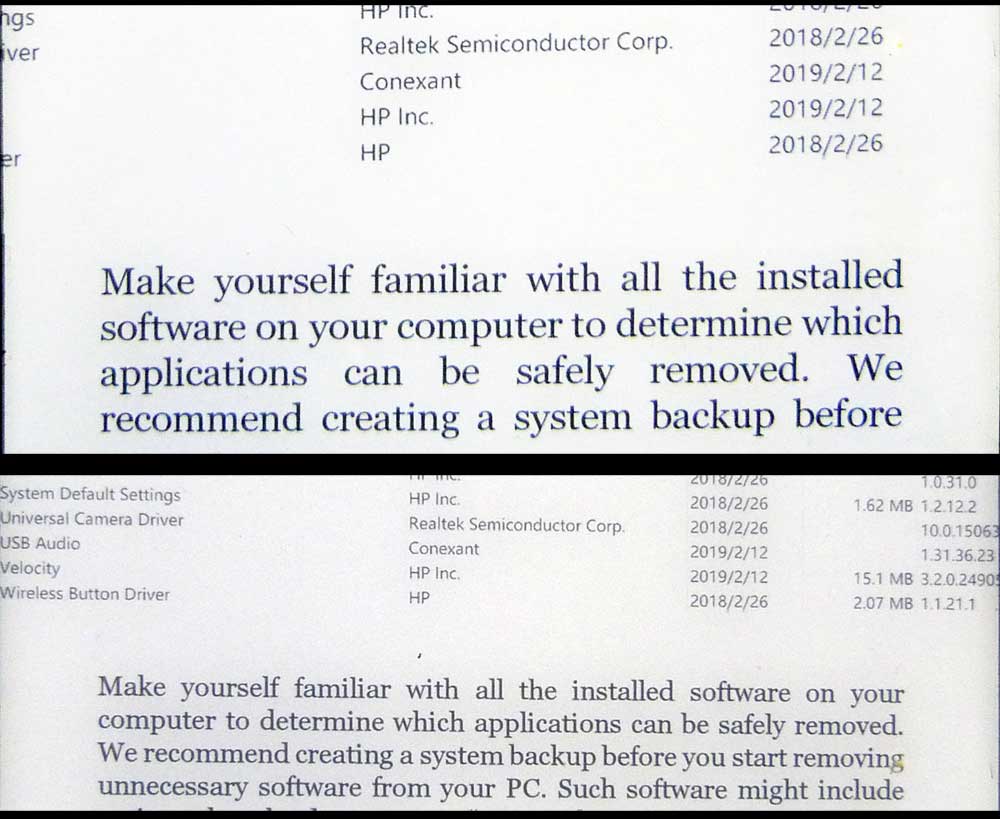 Meh, Nemanja did all the hard work

It might add some styles, clip images, add different headers and footers, different table of contents style, different background, fonts etc. It might even show blank pages between the chapters.

Here’s how this ePub file looks on my Redmi Note 7 smartphone (reader is ReadEra, available for free).

@npudar
The epub format is quite difficult to manage correctly. Trying to juggle with xhtml, ncx, opf and xml, my own efforts to convert to epub for all kinds of reader apps have always failed !

I am just about to do all these things from your huge list of tips… it’s defintely a lot of work to do. I am reading, clicking and typing now for over an hour and i just have finished about the half of the tasks that have to be done… but i think it will be worth it.

I have a question regarding the RegEdit for core parking.

following the manual I search for dec35c318583 but my entries under power settings don’t have an “Attributes” REG_DWORD entry to edit.

Based on the search suggested, I also get about 100 of these reg entries.

So a couple of questions… do I need to change them all and what should I be changing if I don’t have “attributes”?

I’ve just checked on Windows 10 20H2, this option is still there. I have many results for the “dec35c318583” search query, but only two of them that include “Attributes”.

Make sure that you click on the root entry in the registry editor (“Computer”) before performing the search and double check that you didn’t miss these.

When you set Attributes to 0, you’ll be able to change the core parking setting for other power plans, as well, i.e. Balanced: 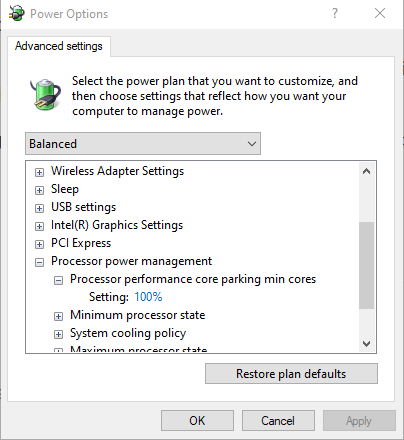 If you still cannot find these entries, I suggest that you simply proceed with another optimization tip.

found the instance in there, thanks for the extra guidance.

BTW… this is a very well thought out and written guide that goes DEEP into Win10… some of this I knew already (I optimize my PC for my video work) but some of this is new to me… tremendously valuable.

If you like it, please spread the word. It’s free, it’s good and it will motivate people to find out more about Gig Performer.

// Fun fact is that there were originally even more tips planned, but when we tested these with Gig Performer, we didn’t see any noticeable improvements.

After reinstalling Win10, I ended up optimizing it by following carefully this 'ultimate" guide.
I compared the results in terms of performances with those noted before and found that the cpu usage or loading times were about the same.

I specify that my windows system was already optimized for several years and that my biggest gig contains less than 20 rackspaces and the rackspaces are not very loaded in number of plugins.
Indeed, I only play compositions and I’m alone live to accompany spoken word performances. My work is based on the only guitar playing with audio plugins plus some synths via Midi Guitar from JamOrigin, the use of loops as well as audio files of “sound material” manipulated in the audio player.

On the other hand, it may be subjective, but I have the impression that there is more stability overall, especially in other applications than GP, which would mean that GP is basically very stable.

In any case, I’ve learned a lot about component settings, the use of windows services, priorities and so on.
This guide is really very complete and very accessible even for people with little computer skills.
I regularly recommend it on other forums and to my friends and family.
Thank you again @Npudar for this remarkable work which deserves to be called “ultimate”.

After reinstalling Win10, I ended up optimizing it by following carefully this 'ultimate" guide.
I compared the results in terms of performances with those noted before and found that the cpu usage or loading times were about the same.

Thanks for doing this!

On a fast computer - you may not see a huge difference in the momentary measurements, but what this definitely helps with is

Basically not only does this make things more stable, but it also provides a little bit less mutable environment which is always good when it comes to hardware that’s used on stage (at least I think so

Another tip for a glitch-free audio system → change the refresh rate:
Link: Any difficultys by running multiple instances - #3 by Vindes

Another great tip from @pianopaul

If you experience strange CPU/Network usage, pay attention on this tip and review settings of your plugins.

Actually this issue may apply to all NI plugins, not just those two.

Another great tips for those that have problem with Firewire interfaces:
Link: Crash Experiences Concerns - #22 by Vindes

Here’s a user that installed a legacy driver and it worked more stable for him: Crash Experiences Concerns - #41 by Phil