I needed something to create harmonies during live performance from my alto sax. Funk and pop horn section sort of stuff. Everything I tried had high latency or didn’t nail the harmonies I needed. I just tried a demo of Diatonic Shifter 2 by Audiowish and it works great (so I bought it).

You specify the harmonies you want for each original note played, so you can adapt any sort of scale harmonies you want. I use two instances for a 3 piece horn section. The latency is nearly zero, and the note detection is spot on. Demo it if you’re interested…

I wanted to take a look at that Diatonic Shifter but discovered it is only available as an AU.

Ah, had not seen Pitchometry, thanks. The manual and video are promising. Costs twice as much but has tons more features, and even includes formant shifting (very useful for vocal shifting). I’ll try the demo!

I am and I am probably not the only one

Costs twice as much

Well, the other one doesn’t even have a GUI - they’re just using the default AU sliders

OK, I demo’ed Pitchometry. Nice … the Custom harmony section did everything I needed. I really like the ability to add and mix multiple voices, and quickly add octaves. The UI is much better, of course (though the AU sliders in Diatonic Shifter didn’t bother me). The formant shifting is useful on some instruments. I suppose I’d recommend Diatonic Shifter if you’re on a macoroni dinner budget and don’t need side dishes, and Pitchometry if you like a little wine with your pasta and salad.

I checked out Pitchometry for guitar. They got my money. I would have waited for a longer demo period, but they blasted noise every few minutes.

I have a need for an octave down while I play from the middle to high range lead on guitar. I started with a cheap plug-in that became thin on high notes. I next tried Waves Vocal Bender. It’s good on single lines and has a lot of character, but it’s feature-limited. Plays great on the high notes. Pitchometry kills the others by handling chords, being feature-rich, and sounding natural.

Frankly, Vocal Bender is the most interesting as an effect. It stands out, and if you play clean melodies, it works well. Pitchometry is almost too natural. It’s more of a “sound” than an “effect,” I’m blending dry and octave. To balance the two is sensitive. It’s so natural that it feels like a harmonic, rather than a second voice. Maybe I’ll need to add fuzz to the octave or something to get my effect.

The bottom line is that it handles chords, is natural, and controllable, so it’s sn ideal starting point. You can add effects to a great pitch effect, but you can’t make a clean voice from a bad pitch effect. And if you flub a line on an effect that handles chords, there will be no surprises. That’s good good insurance during a live performance.

This plug can to do much more than a simple octave doubler. We will see what more I will do with it…

I wonder if I spent my money too quickly. Pitchometry sounds and works great, but the latency is just too long. I’ve gone back to Vocal Bender.

It’s funny. The evening when I tried it, I didn’t really notice the latency. It felt very playable. Then I tried it in a rackspace where I also play some keys, and it was just too much. Could be great for studio work though. The quality is very good.

Vocal Bender needs single lines, but it’s not unforgiving. It has an interesting character, it has zero latency too.

Pitchometry sounds and works great, but the latency is just too long. 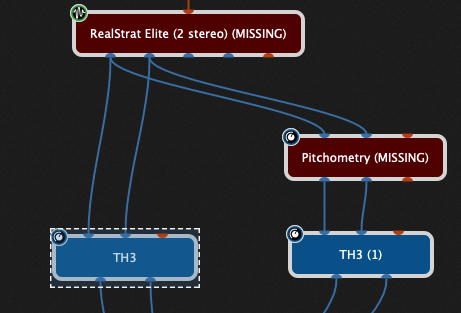 That would be completely unusable - what hardware are you using, what audio interface, what driver, what sample rate, what buffer size, etc?

Because I was curious, I installed the Demo

It shows a huge latency:

Yep. As I recall, it showed the same number of samples. I think I’m running 44.1 kHz and you’re probably running 48 kHz, which would explain why my latency is 10% higher.

Frankly, I wish it didn’t report the latency. I’d be happy with its sound delayed, but in VST-world, this delays my whole signal chain. I tried running it in parallel with my clean sound, but it just delays the whole setup.

Well, I don’t know what to make of this - I’m using it on stage with my Reelin’ band to harmonize with one of the guitarists (with some pretty fast riffs going on) and if there was a delay like that, it would be completely unusable.

Diatonic Shifter is the one I settled on. Minimal latency. Does what I want with smallest overhead.

Try it for yourself. The audio results dont lie.