I understand this is not the recommended way of working, but it is the way that works best for me. And I hope maybe I can get some advice/help.

IK Multimedia support has been lacking so far. But it seems bizarre. Any ideas?

Create a MIDI In Local GP Port block and connect to Amplitube.
Assign a knob widget to the PC Parameter of that block.
Turn the knob.
Do the presets change in Amplitube?

This is Windows VST3 for me:

But it seems bizarre

Hey @edm11, Thanks so much. I did try exactly the method you are using but it did not work for me! And as mentioned, A MIDI monitor between the MIDI in block and Apmplitube show the PC message being sent to Amplitube. The MIDI channel is set correctly the channel 1. I have presets assigned in Amplitube to the corresponding PC #. And those are the only addressable parameters i can see for this.

But I am glad to see it does work as it should. Just not for me for some reason, so I’ll keep at it. I was starting remember there being a thing when VST3 first came out that it didn’t accept PC messages, so I was going to try to the VST version, but you say it is working for you in VST3.

Just to be sure, your setup for my example looks like this? 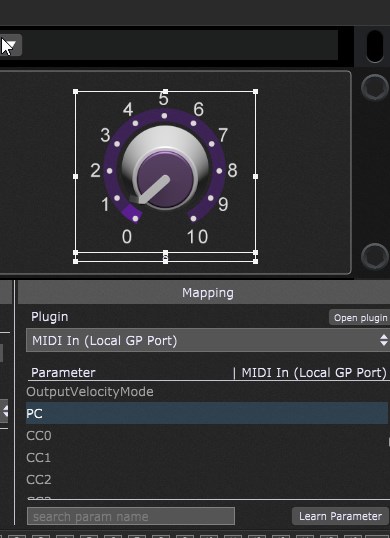 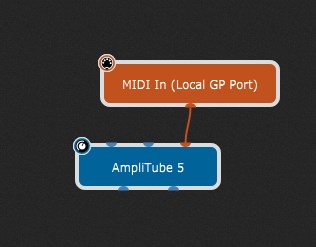 I wonder if a specialized scriptlet should be available for this. It would just have a singe parameter that, when touched, would just send out a program change

I already made one, I don’t remember exactly, but I think it is also possible to use it as you described.

This gig file features a Scriptlet which can send a Program Change (PC) with an optional Bank Select (MSB+LSB) at each rackspace/variation change and can also learn from an incoming program change message. [Sir-David-San-Program-Change-Sender] Idea for this Scriptlet arose from frequent user requests of a possibility to send a Program Change message to an external synth at each variation. This concept has been reworked a bit to be able to optionally send a PC at each rackspace/variation and t…

Alternatively, give this a try.
AmplitubeScriptletTest.gig (13.6 KB)

starting remember there being a thing when VST3 first came out that it didn’t accept PC messages, so I was going to try to the VST version

On my system (MacOS), all versions of Amplitube 5 (VST3, VST, AU) will respond to PC messages by using the widget connected to the Midi In block’s PC parameter, like in @edm11’s screenshots above.

Amplitube does need to have the specific mapping of preset to PC number set up in the ‘Control’ options. 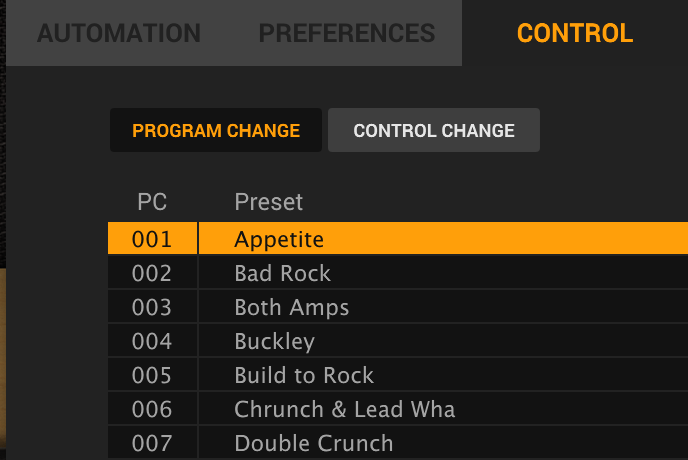