I’m trying to control a Behringer XR-18 mixer, and the tablet apps (both the XAir app and the Mixing Station app) are not cutting the mustard for me for live performance.

I was considering using an X-Touch Mini for live changes to faders, mute, and possibly other changes. However, after reviewing several YT videos, it looks like there must be a software bridge to connect the X-Touch Mini with the XR-18.

However, I know there are brilliant minds here at GP as demonstrated by those who have shared gigs, rackspaces, scripts, and more, so isn’t GP the great software bridge between these two musical pieces of hardware?

For example, @Glen has shared a great rackspace/gig to control the X-Air 18 as seen here: 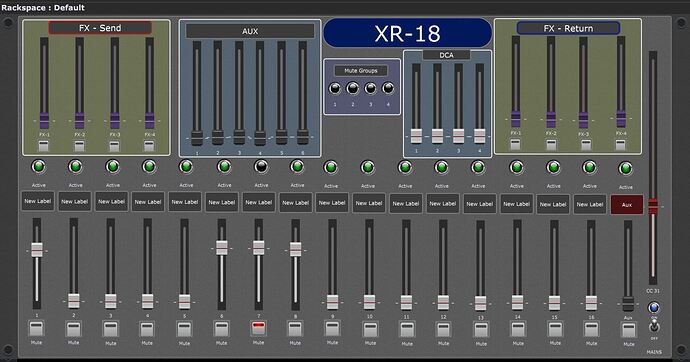 I do not have the programming skillset to create this on my own, and I really do not want to pay for a third party app as mentioned above. Instead, I would gladly offer some remuneration to someone in the GP community to help create a combination of these two fine examples of creative GP ingenuity to have the X-Touch Mini control the XAir-18.

Or is the X-Touch Mini the wrong choice? Is the Korg nanoKONTROL2 the better way to control the basics of the XAir-18 without a tablet?

I welcome any suggestions and look forward to your responses.

As always, I thank you in advance for your time and responses.

Ok… i actually own a XR18, but its installed in our rehearsal room, so i am not in the situation right now to try things myself, yet i haven’t used it with midi so far…
I took a brief look at the MIDI implementation chart of the XR18 and i guess, the gig file/rackspace from Glen might cover all the options the XR18 offers via MIDI (also here: i haven’t tried it yet).
So your first steps would be: Configure your XR18 for MIDI-operating depending on how you have it connected (5pin MIDI or USB) and then try to make it react to the the widgets from Glen’s rackspace.
Means: If you move a fader widget or press a button on the rackspace panel (by mouse), you should see the action mirrored in the Behringer XR18 application.

If this operating direction is working, then check if the bidirectional connection between the widgets and the XR18 is working correctly, say if you move a fader in the Behringer app, the according fader in the GP-rackspace should move the same way - make sure you have all the widgets configured for MIDI-sync and maybe also have configured your MIDI IN/OUT in GP correctly (in the settings as well as the wiring).

If this should be working, you’re halfway through - at least you are sure that the connection between GP and the XR18 works as it should.
Now for the other side of the operation: How to control the widgets best?
And i’d say “it depends”.

The little Korg Nano Control would offer the best combination of buttons/knobs/faders to operate a mixer’s controls… you could cover volume, pan, mute… and the caption on the controller would be correct. But this device lacks completely a bidirectional connection - at least for the faders and knobs!
So if a fader or button is being operated from the rackspace (by mouse) or from the Behringer app, you wouldn’t have that change on your hardware controller, and as soon as you’d move the hardware control, the widget would either “jump” to the new position or you’d have to move the controller up and down to “catch” the actual value - both is nothing you would like to have to do in a live situation, since both would result in jumping volume levels or similar.

The X-Touch mini works very well with a bidirectional connection in GP, since the knobs are endless controllers and have a LED ring which can react to changes from the widgets. But it only has one row of knobs and no faders, so i guess you’d have to drop i.e. the pan adjustment… might be OK but is not really appealing.

I think the best solution would be something like the X-Touch Compact or maybe the X-Touch Extender (not entirely sure if it works standalone without a “parent”, but would be bit smaller than the “Comppact”). Those devices have motorized faders as well as knobs with LED rings and a full set of illuminated buttons, and they should also work bidirectionally.
But they are big and expensive (compared to the mini-controllers)!

At last - no matter which controller you’ll choose - i’d strongly recommend to use GP’s Rig-Manager to create a full set of control aliases that you then use as MIDI control for all the widgets!
If time allows, i will go and fetch the XR18 from the rehearsal room and try Glen’s rackspace, but i guess it will be at least next week or so…
Good luck with your efforts!

Thank you @schamass for the very detailed response. I will follow your advice through the first several steps. I am going to try first suggestion regarding the NanoKontrol, albeit with the limitation of not having bidirectional capability.

This is why I LOVE Gig Performer and the GP community. Musicians coming together to help solve technical issues so we can get back to making some more music!

Thanks again, @schamass, and I’ll look forward to your update should you get access to your XR18.

I will also post my results as well because I know that there are a lot of XR18 users out there.

Maybe i will also benefit from a cool XR18 template one day… so solving this problem is not just altruism.

BTW: I just looked through Glen’s rackspace… there is no hidden rocket science in it.
There are three MIDI-Out blocks which should be the XR18, one for each channel 1, 2, 3… then on each channel there is a fix assignment of CC# to the particular track-channel of the XR18, where the MIDI channel (1,2,3) then determines if a CC# is controlling a fader, a mute or a pan.
I think if you correctly assign the MIDI ports and configure the XR18 accordingly, this thing should work - at least in one direction GP → XR18
To make it bidirectional you’d have to activate the “Midi Sync” option in all of the widgets properties first!

I just updated my Panel and posted it in the link above. As for the x-touch mini, here is a link for you.

Thanks for chiming in schamass, Hope you are well and have a good holiday.

Hello again GP friends, @schamass, I took your advice and picked up a nanoKONTROL2.

Thanks again, to @Glen for a great rackspace to allow Gig Performer to control the XR-18 digital mixer. Using Glen’s rackspace, I was able to accomplish my goal of quick, LIVE adjustments to mix levels using the nanoKONTROL2.

A Setup Note: The nanoKontrol2 comes pre-programmed with the eight (8) faders as CC0 to CC7. However, if you try to assign the first fader to the GP rackspace for the XAIR 18, you get the following pop-up warning:

This is an easy fix with the Korg Kontrol Editor, changing the Faders to CC1 to CC8 rather than the default mentioned above. When completed, click on the Communication tab and Write the data to the Kontrol unit. 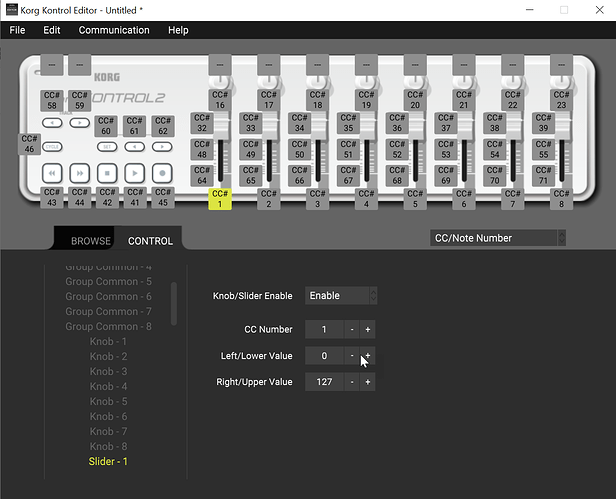 Here’s a 45 second video of the GP XR-18 rackspace being controlled by my new nanoKONTROL2.
Not very exciting to you, but I’m super happy this was a quick and easy way to control the XR-18 in a Live situation.

One final note, the lights on the KONTROL do work and light up when you utilize the sync function in Gig Performer. Thank you @schamass for that little reminder above.

So no need to disconnect my XR18 in the rehearsal room to dig into this…?

@schamass, no need to for my question. Although Behringer offers limited control via MIDI, there’s just enough control for my purposes, which was controlling a solo-performance mix live with a small MIDI controller.

Thanks for the offer though!

Happy that worked out for you Dennis… Happy Holidays and keep tabs on the Community forum here. It’s the best!

Also another note is the Back Stage seminar videos are great with Brett hosting, are incredible, on facebook.