You know those good, old analog toggling foot switches which are either on or off; I have a few of them, and wanted to find out how to use them for next/previous pedals, having Gig Performer ignore whether they were turned on or off.

I found a way, using settings in my Arturia KL 88 which I will share. Whether this can be done in another way from within Gig Performer I don’t know.

The problem, if you try to set them up as a toggle pedal in Arturia’s MIDI Control Center, is that it sends 3 or 4 values. When toggling on they are 0, one or two random ascending values, then 127. The opposite result when toggling off.

The solution is to set it up as Switched control, with the option Gate. It then thinks it has to do with a pedal that is on as long as it’s held down.

The trick is to set the Off Value and On Value to the same value. I used 63. This way clicking the toggle pedal send just one message when getting tooggled, whether it’s toggled on or off.

You the go into GP’s Global MIDI options and MIDI learn by clicking the toggle pedal once.

Could you please post a screenshot of the GP Global Monitor window when moving your pedal? 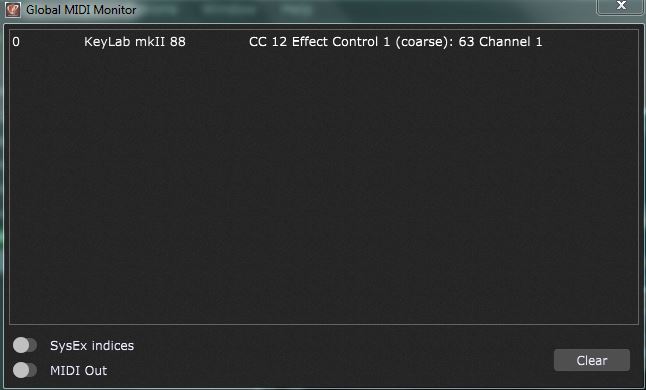 Do you get a message when the pedal is pressed or when it is released released?

Do you get a message when the pedal is pressed or when it is released released?

I get the exact same message whether I toggle on or off. And it works as it should in MIDI learn in global options. 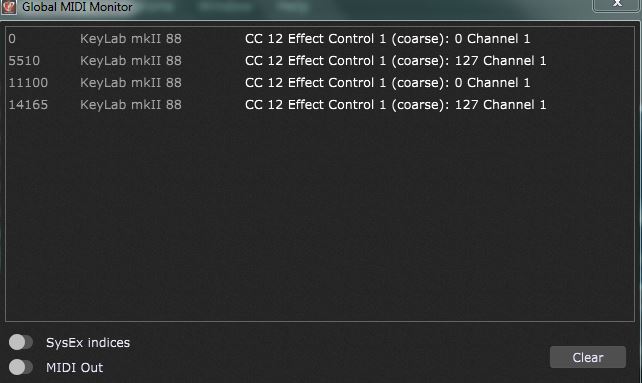 But then I will have to handle both 0 and 127 in GP to cause the same action, namely moving forward.

It also wouldn’t be possible to MIDI learn in global options anymore.

But then I will have to handle both 0 and 127 in GP to cause the same action, namely moving forward.

Why? You press the pedal it moves forward, that’s it. What’s the matter with that? Try to MIDI lean the NEXT widget button in the global rackspace of the following gig file and tell me what would be wrong doing so:

It also wouldn’t be possible to MIDI learn in global options anymore.

Why do you need it absolutely? It is not clear to me…

Thx! Maybe you’re right, that the widget don’t care about the value.

And; I of course don’t need the global options solution if the widget works.