Found what appear to be a few minor bugs:

I used the patch persist but no matter how long I set tail length to be it seems to cut off after about 3.5 seconds

I am not sure if I understand correctly your issue:
Patch persist and tail length are 2 different things.

Patch persist means: You play a note and hold down the key, then you switch to another rackspace.
The sound stays until you play a new note, then the old sound is gone and the new is played.

Audio tail length means this:
For example you play a short note with a reverb as effect.
Now you switch to another backspace and you can hear the reverb effect until it disappears normally or until the audio tail length is reached.

You must not use CC0 (It is a bank select followed by cc32 = program select)!
CC 0 does not work like for example CC 1.
So this is no issue of Gig Performer.

Ok, I assumed tail length was how long any tails would persist after rack change. Either way, persist on, change racks and previous sound persists for about 3.5 secs then cuts off

Maybe a silly question: Patch persist does not work?
Patch persist works with played sounds, not with audio effects.

Yes it is a played sound. More specifically a cymbal crash. The tail lasts longer than 3.5 secs

Could be…
But in Gig Performer this is not working, sorry you have to change it on the NanoKontrol.

Assigning a button on the NanoKontrol to next/prev patch has it moving 2 at a time? (Note on/off?)

What can you see in the Global Midi Monitor window?

A proper bizarre one that had me thinking I was going mad. I have a 32/32 audio interface and there’s no input on ch 32. Exactly the same physical connections worked fine in other sw.

Are you sure you enabled the corresponding Audio In?

I’m unaware of any channel specific enabling/disabling mechanism in GP but everything was connected correctly and switching to MainStage or Logic had the signal correctly from ch32. GP had nothing

In the Audio Preferences you can enable/disable Audio-In and Audio-Out
How does is look on your machine?
https://gigperformer.com/docs/Userguide36/optionsaudiosetup.html 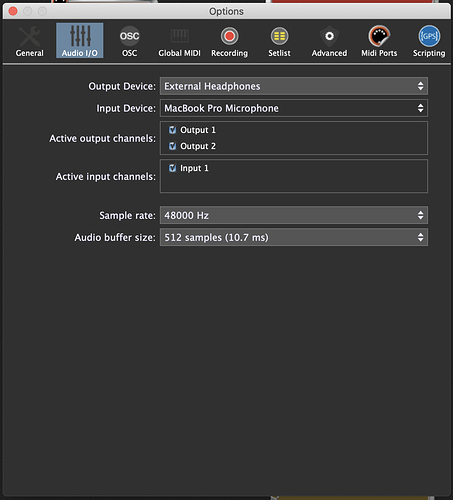 That’s standard usage. It can do whatever you want. For example on my x32 mixer cc0 controls channel 1 mute on/off
I see no reason why I can’t use cc0 in GP for whatever I wish

Yes it is implemented this way in Gig Performer.
A single CC 0 message does not really make sense.
Do you have Problems in defining different CC message on Nano Kontrol?

Yes it is a played sound. More specifically a cymbal crash. The tail lasts longer than 3.5 secs

What plugin are you using?

I am using the same and the audio tail is working.
Can you upload a small gig which faces the issue?

In the current implementation, CC0 and CC32 are reserved for bank switching messages, per the MIDI standard. Korg really should not have used CC0 as a default value. At some point we will relax this restriction if PC messages can only come in from some devices.

Well, as I said, I can’t see an issue if a message is sent on a specific channel for a specific purpose why that should cause you a problem or why you’d decide to impose a restriction on its usage just because that was the original intended use for cc0 & cc32. I repeat, the x32 mixer (which is very popular) uses cc0 and cc32 (on midi ch 2) as mute messages for ch1 & 33. Does it matter? Not in my opinion

We had to start somewhere and that was our design decision at the time. We have a similar restriction for CC64 as it plays a role in Patch Persist. In a future version, we’ll probably allow a different CC message there as well. The nice thing about software is that things can change, and they do, based on numerous factors including feedback from customers.

Understood (I tour with an X32 myself) and control surface support will get enhanced in the future. In the meantime, it really isn’t a big deal to just change slider 0 on a nano to use a different CC number. I have one of those as well and have done that myself.