BTW, the KeyLab MkII has five pedal inputs and they can all be continuous, though I expect that most of us would use a simple sustain pedal on the Sustain input. I’m using a sustain pedal and two FC7s.

Here’s how to calibrate them… First, plug them in.

Next, open MIDI Control Center. It’s an app that comes with the keyboard to configure it. Click “DEVICE SETTINGS” in the upper right corner. Scroll to the bottom and find “Continuous Pedal Calibration” where the five pedal inputs are listed.

Move the pedal through its range while watching the display on the keyboard. Note the min and max MIDI values. Type those into the app min and max edit boxes. That’s it! Now move the pedal and observe the range. It should be 0-127 now.

Is the pedal linear? I haven’t measured it with an angle gauge, but it seems close enough by feel. Does it skip values? Hmmm. Not sure. Hopefully, the A/D converter has enough bits to allow the calibration to work without errors. I haven’t tried it on enough instruments or controls to know if it’s grainy.

Anyway, this is a nice win. The FC7 is solid and robust enough for some aggressive wah and whammy action without stripping some crummy plastic rack and pinion setup. And it’s reasonably priced to boot. (List is $60 and I found new ones for under $40.)

I will receive a Nektar Pacer foot controller next week. I’ll report back on its compatibility.

Hi, yes I did a bit of research on this a few years back and this is what I found out. Not all pedals are created equal. 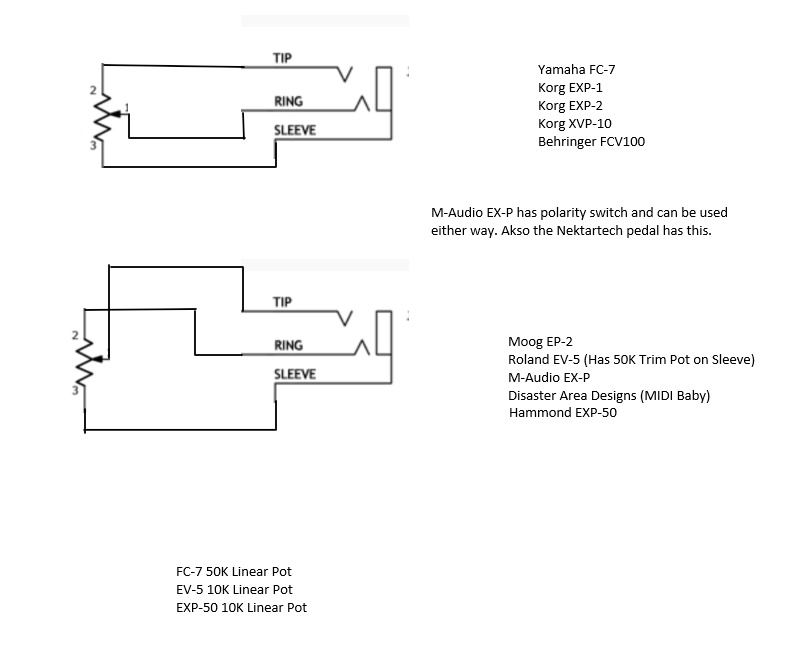 I had to reverse the tip and ring on my Hammond pedal to use it with Korg. I did this with a couple of stereo TRS adapters hooked back to back so I didn’t have to cut into the wiring.

My Nektar pedal can work on anything I have because it has a polority switch built in and also a trim pot for calibration.

Thanks Steve. This is very helpful. In the case of the FC7 and the Akai, I’m 90% sure it was the impedance, rather than the polarity. I opened one of the pedals, got out the voltage meter, etc. As I recall, the FC7 doesn’t move the pot all the way from end to end, and with the 50K pot, the voltage didn’t go far enough to make it work. I tried some parallel resistors, but never found a recipe that worked.

Anyway, the KeyLab MkII was happy - and so am I.

FWIW, I bought a Nektar expression pedal to go with the Nektar Pacer controller specifically because I wanted to ensure success. Once I receive delivery, I’ll have three working pedals. Crazy!

I use a gig script to reverse the polarity of the incoming message in this case.

I soldered a little adapter cable that i use to switch polarity, this also works on any hardware device.

I am using a modified (switched the tip and ring cable as mentioned above) FC7 pedal on a Roland A88mk2 controller. That also works perfectly! The FC7 is much more stable and robust than the EV-5 pedal from Roland.