Wow - everyone thought it would just be another CS-80 but

GX-80 is Cherry Audio's visionary flagship synthesizer, over a year in the making. GX-80 is a transformative virtual instrument that combines the unparalleled sound and features of the fabled GX-1 “Dream Machine” and its renowned descendant the...

And what about the CPU usage of their other synth? I am closed to invest in their new Stack 3 synth collection: 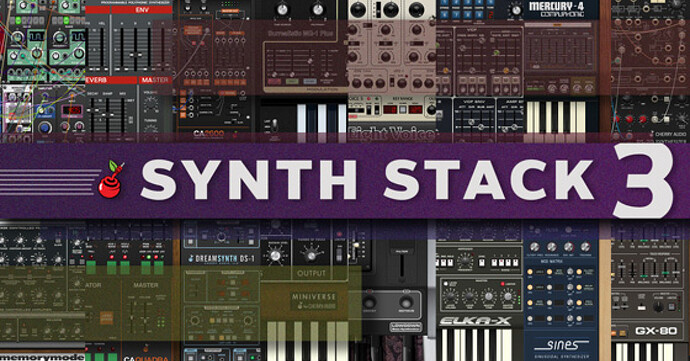 I own quite a few of their synths and i love them. Some of them are not really light on CPU usage, but as far as I can say, they are well usable.
Oh… this gx-80 is very tempting again, but i think, i won’t buy it this year. I already spent enough money this month and i should first play a bit more with what i already got before buying new stuff.

Yes…myself I try to stay with the Spectrasonics suite and Arturia Suite + my prophet rev2. Every normal person would keep that for life and learn to use it to the bone…but easier to say than done

Of course I bought the stack…
Bad thing is the GX-80 simulation needs a polyphonic aftertouch controller.
Nothing easy in the market

It does not need, it supports it.

Do you know the scriptlet to fake a polyphonic aftertouch?

Yes. I had a link in another thread. Will test it during Christmas holidays.
I know that poly aftertouch is not needed, but changing those complex pad textures just pressing…

I bought the GX-80 and love it. I don’t see a heavy CPU usage. Perhaps stacking multiple instances in a rackspace would do it. The Korg Triton VSTs are the worst CPU hogs in my gig file.
One quirk about the GX-80 is there is no infinite sustain by using the sustain pedal. This is based on emulating the original design. You can adjust a sustain release time but it will fade. Infinite sustain works when the notes are held down.
There are possibly two layers for a patch. If you want to add LFO via the modulation wheel you may need to adjust both layers.

But as Gig Performer users and thanks to Scriptlets, it doesn’t matters for us

Thank you!! Going to try this plugin later today.

According to the documentation when Sustain is set to ON it should work normally.
But it does not.
I contacted Cherry Audio Support.

This is in the documentation

Note: There is no way to get an infinite sustain when keys are released as may be possible on other synthesizers. Released notes always decay, similar to on a piano with the sustain pedal down. To keep a note sustaining indefinitely, its key must be held down.

Maybe they react on my request.

Hopefully. There was a similar issue with Miniverse where the plugin conformed to the original design regarding not being able to adjust the pitch bend range. Originally, I got around the issue by adjusting a widget in Gig Performer but then Cherry Audio added the capability to the plugin directly.
I’d like to see Cherry Audio add an infinite sustain mode for the GX-80.

I contacted cherry audio and they take the sustain thing on the request list.

How did you adjust a widget to control the pitch benad range?

Map incoming pitchwheel to a widget — map the widget to the pitch bend parameter of the MIDI In block connected to the synth you want to control.

Adjust the widget scaling to suit!

I don’t see it listed under any presets or Scriptlets. Do I copy the Script contents from the sample gig file to my own Scriptlet and save it?

If you want the Scriptlets to become a favorite, please RTFM

Save one or more plugins as favorites

Gig Performer enables you to select a plugin block or more plugin blocks and save the selection as a favorite. Let's take a look at this example below: