So I’m trying to go through my big main gig setup to convert all of my plugins to something that will run on Apple Silicon. VB3-II only shows up as an AU plugin when I run GP natively. But when I try to open the GUI, I see this. I don’t believe I have this issue with any other plugin (at least from what I’ve been able to see). Has anyone had this issue before? 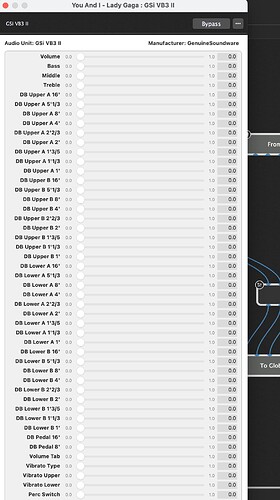 VB3-II only shows up as an AU plugin when I run GP natively.

And in that situation it is running under Rosetta.

What happens if you run GP under Rosetta as well?

Unfortunately I know this issue with other AUs. From time to time all AUs have this strange GUI (Apple MacBook M1 Monterey). In the Apple console I can find a crash report called “AUHostingServiceXPC”. By the way: all AUs have lost their settings in GP4 after that. So I try to use only native VSTs.

I think, that is an Apple Silicon problem.

So it’s failed under Rosetta once, but it also has worked. It seems to be inconsistent. I flipped it back to Rosetta and then native and it seems to be working again. I guess as long as I can get my sound the way I want in time, it’s not a huge deal. It plays fine either way.

Yes, you are right, but when you are in a live Gig, you can’t work with inconsistent behavior of plugins.

Speaking with my music hat on rather than my development hat, I have never really trusted AUs.

Even on a Mac, I always use VSTs or VST3s