I am seeing an issue when using MIDI Patch Persist. When I use a Global Rackspace, the volume of the existing sound jumps slightly when I change Rackspace.

For troubleshooting purposes, I have simply routed the Global audio in to the out, and this issue happens. If I don’t route via a Global Rackspace, the Rackspace change is fine.

I have tried various VSTi’s and it happens with them all, so it does not appear to be an issue with them.

I emphasise that if I do not use a Global Rackspace, then MIDI Patch Persist works fine.

What needs doing to fix this please?

Hi @Cheth, welcome to the family.

Can you upload a small gig file, so I could check the issue?
What version of GP are you using?

Can you show a screenshot of your routing in the wiring view?

Hi @pianopaul , sorry for my delay (thought I would get an email notification).

When I try to upload files, it says “Sorry, new users can not upload attachments.”!

I have placed then here 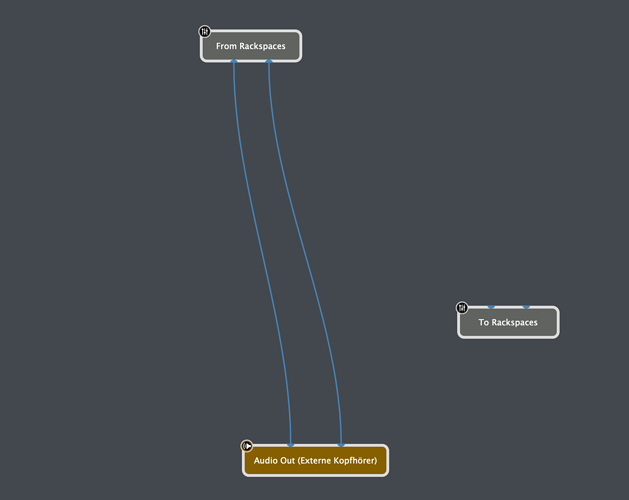 What’s happening here is that the sound is produced in one rackspace, sent to the global rackspace and then back to the all active rackspaces.

When using patch persist - multiple rackspaces are active and therefore all will receive a copy of the signal. If you just route it out you will get two signals going out resulting in a volume increase.

To solve this issue - separate the signals for each rackspace that uses patch persist into its own stereo pair and the intermixing/jump increase will not happen.

Thanks @pianopaul . That’s a work around.

But it’s a bug right? It it entirely legitimate to route from the global rackspace back to the main rack?..and hence the options are there.

Thanks. I don’t know whether I am understanding you @djogon …why did I not have the issue when not using a global rackspace please?

The reason for me using a global rackspace is to have as little as possible in an individual rackspace. This is because, ‘just’ to change patch in the VSTi, I have to duplicate the rackspace. [Can’t use Variations for this – would be fantastic if we could, but I get the general idea of why this is not possible.] That’s OK, until you want to change your configuration, then you could have dozens if not hundreds of rackspaces to edit (well, in reality, delete, recopy, and re-select the patch in the VSTi).

Therefore could be several hundred patch changes on a keys 2 desk in a musical, that can happen in very quick succession, and need to take place without clipping the previous patch. I need patch persist for a lot of those changes.

I appreciate my use-case might not be main stream.

However, when you use a configuration like that and you are using patch persist, during the switchover period, you have a second rackspace B which is also active.

You temporarily have two active rackspaces

The global rackspace, still receiving audio from rackspace A, is now sending that audio back to both A and B and that is why the sound is louder.

But it’s a bug right

No, you have explicitly configured things such that the global rackspace is temporarily sending audio to two rackspaces.

It it entirely legitimate to route from the global rackspace back to the main rack?..and hence the options are there.

Sure, it’s legitimate, in the sense that it’s legal and allowed and there can be good reasons to do that. But it can be abused as well. If you send the same audio back to two active rackspaces, then that audio is going to come out louder. It’s no different than if you send audio to a loudspeaker and then for a little while you sent it to two loudspeakers.

Thank you everyone for contributing. I’ll be sure to route to the outputs from the global rackspace, and not back to the main rackspace.

I’ll be sure to route to the outputs from the global rackspace, and not back to the main rackspace.

I just want to add that if you need to, for some reason, you still can do that, but do it on a separate channel pair for each rackspace so that the signal doesn’t double when you use patch persist.
If you don’t have to then it’s obviously simpler not to route back.