playing Midi Accordion I have constantly CC11. If you call up a sound in a VSTi and you do not filter CC11 from your bellow, than almost all sounds will be instantly controlled in volume by the bellow.

AND additionally by Velocity and if the Accordion is sending something else (maybe CC7 with value 50) you have a totally weak sound.
Of course you can filter CC 11 and CC7, but if a controller comes from everywhere before or after calling the rack, it could be it is weak somehow.

Thats why I want definately to reset some controllers by default when a rack is called.
That has nothing to do with automation.

The other thing is, sometimes i want to use CC11 and also the usually reaction to it.
(volume, but independently from CC7 Volume)

In DAWs I have some Midi Modules for transforming controllers. But how to do it in GP?

Another Special thing in that context is following:
I play a string sound and it has a long release phase. Keyboards would play the release to its end- thats all. But the accordion is sending constantly CC11 and the most VSTi are reacting with volume changes to it. That means when I release a key and change the bellows direction, the release will be interrupted.
Now I try to find a solution, which filters the CC11 in the moment when no key is pressed.
But wait - no … wrong … if I push the next key before the release ends, there would be a value jump … oh no.
No idea…

Maybe you should have a look to this thread… i am no accordion expert, but this could address your issue.

Too much Expression General discussion about Gig Performer

I know this, but I think it is a bit different for a MIDI accordion bellows, as there is probably always a small breath which is probably continuously measured by some sensors and converted as a CC#11 message. The MIDI accordion should have an option to reduce the CC#11 rate, but it seems it is not the case.

Thank you for the answer,

The amount of values is not the problem. I could reduce or switch off the bellows CC.
But I want to use it scaled, or sometimes filtered or routed.

Please tell us a bit more of what exactly you intend to do… i.e. which plugin do you use and which parameter of it you want to control with CC11 (obviously it mostly is the volume).
Are you familiar with the concept of using widgets together with MIDI controls and plugin parameters?
Sorry for this very basic question, but you definitely can scale the value range of a widget (any knob or fader, pedal and so on) and then any connected plugin parameter will also follow these scaled values.

You can use the MIDI Filter plugin to filter it out.

yes I am familar - controlling a widget and a automation parameter in a VSTi is no problem.

The point is, that Omnisphere and many others react to CC11 with volume changes and that is not the same as CC7 and it is no automation. Than there is Velocity yet.

Actually I don’t want to change CC11 behavior completely, yes I want to control some sounds with my bellow.
But I want to scale this CC11 - not the translation to a Parameter … that is to late!
When I would do that, i had to kill the signal flow CC11 into the VSTi, but use it for a mixer or so.
That is pretty awkward.
I am looking for a possibility to scale and init the 11 (or maybe something other CCs) directly, because that way I could avoid to change the reaction within the VSTi every time I use another VSTi seperately.
(Kontakt and many others react also to CC11 in the same way)

An example my problem:

And I want to have not less than 80. And actually I dont want a automation of the mixer in Omnisphere.
That is perfect to adjust the relations between the sounds and not invented for expression.

Maybe there is a script somewhere?

But Omnisphere is reacting to CC11 itself with volume changes. And these are directly connected to CC11 0-127.

When you create a Widget and learn CC11 to it, OMNISPHERE should not get directly CC11.

But I want to scale this CC11 - not the translation to a Parameter … that is to late!

I don’t know what you mean by “too late”, but if you want to convert the range of a CC11 message you can:

How to do that? By right clicking on the instrument i find no midi In block and options.
Maybe I should use virtual midi port like bomes translator addtionally?

Here is I show it in pictures: 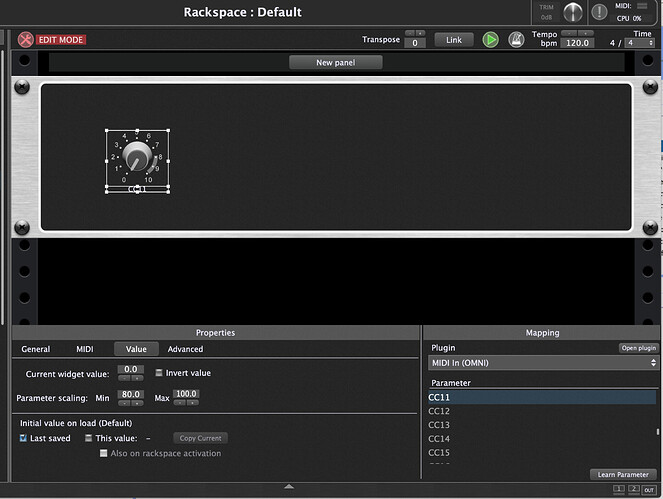 I do not have OMNISPHERE on the computer, but you see the idea

Here is I show it in pictures:

The video format you used is not a big friend of my PC, so I coudln’t check what you did. But, please, try to follow the screenshot posted by @pianopaul.

That looks good. I tried it.

Yes sorry for that video.
yesterday I updated resolve from 16 to 17 and now it shows all media offline - another story.
Sorry.

The problem with cc 11 is solved thank you guys and expecially schamass who called me yesterday.

There was somehow a routing problem.

I used 3 Midi Ins (All the same input)

In B
for controller. It was not possible to filter a controller only on one channel so i had to switch off CC11 in channel two of my accordion, that could be for the next sound necessary … or if I switch to another register, there could be sended on Channel 6 or 13 or something else… than the rack wont work again.

The CC11 (on one channel) should be mapped from 80 to 127. After building the rack from scratch it worked, but during rewiring it lost its functionality some times, so I had several times and checked the certain order to do things.

In C
for notes of two other channels (2 kinds of guitars) seperately in Omnisphere Channel 1 and 2 without CC11. That was quite easy - filter CC11 and ready.

But all in all it is quite complex.
It would be so much easier to have a transformer module for such kind of tasks.
I could only use one Midi In and transform all I want on seperate channels.

Alone to learn the midi controller for a widget … my accordion sends maybe 3 or 4 channels and it was not possible to say, take channel one. Everytime it learned channel 2. How to filter a CC only in one channel? On the end I switched all of exept from channel 1, after the learning I could switch it on again. Why is there no possibility to type it in?

I have a few more things to do:

I know how to do it in cubase, but cubase needs a dongle - what is bad on stage.
And cubase of course is not as stable with huge projects on a laptop.

Sorry - guess i will ask you many times