I took the plunge. A few months back, I had a mission critical recording session where I had custom designed several synths from Massive and syntronik, some sampled pianos, and a Vb3 organ that I planned to play into the session, hosted in GP. Normally, I’ll use stock pianos or the organ from my SKX organ; but, the modern EDM synth work required sound design. Since I was on location and not at my home studio, I used my work’s Yamaha Montage drivers to act as the interface… Normally I can get out of a session in an hour… this one was glitch after glitch, and reset after reset, and stable only around 265 samples, so sluggish.

That was the last straw. I went on Reverb and found a used RME Babyface Pro (gen2) for sub $600.

On windows… Drivers are, like everyone here says, absolutely critical. My old Roland Duo-Capture EX using ASIO4all or the Roland drivers was always glitchy; using the Montage… super glitchy. RME… I loaded up Pianoteq 6, played at 128 samples… no glitches. At all. 96 samples… same. I haven’t gotten it to glitch with Pianoteq until I pushed it to 64 samples, and glitch only happened when I was trying to push it with polyphony and something in the background launch location data… which idk what since WiFi was off. I blame the latest update. Again. This is on a 4 year old Lenovo Yoga laptop with 8GB of RAM, 512 GB NVME, and an 8th Gen Core i5 8250u. Not particularly strong, lol.

Bottom line, I can’t thank everyone on here enough for the recommendation. It took me a bit to save, and in the end, I bought a used unit; but, SO MUCH BETTER.

Welcome in the club! 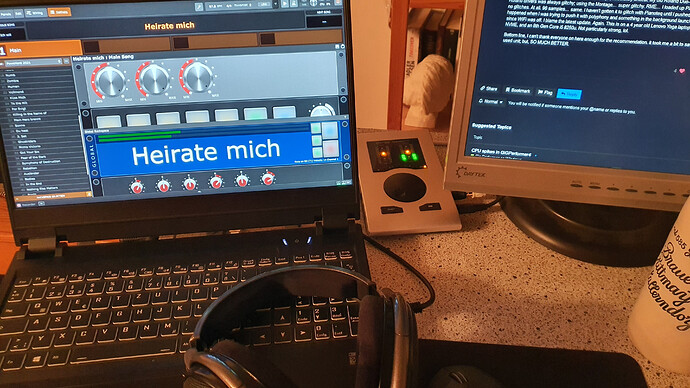 If you want to strengthen your confidence on low-latency and stability with RME and Gig Performer, you might have a look here:

So, you perform “Marry Me” for the groupies at the front of the stage?

Are we still talking about Rammstein?

I found it funny when I found out the translation.

And welcome to the GP community

RME is the BEST! Longtime user with UFX+ currently in gig rack.

Hi @TKOCraig, welcome to the family.

Hi Pianopaul! Thank you! I’m a brand new GP4 user in the process of completely revising my hard & software setup so as to lighten the gig rack and enhance my live performance, with plugins. So much to learn but totally excited about the GP community!

Fee free to ask - no question is stupid

no question is stupid

What’s the difference between a duck?

What’s the difference between a duck?

Two legs are the same

Two legs are the same

Two legs are the same… in particular the left one