The day has come

After close to two years, fighting Arturia memory leaks and Mainstages proprietary plugins. That, and with my steep learning curve to get GP as I would hope it could be, tomorrow morning is the day. I will be taking GP to its first rehearsal, with just over a month to its first gig. I will be taking my backup Mac with Mainstage on just in case, but this week it GP has played faultlessly on my Mac Pro and my MacBook Pro, even when I decided to use Rig Manager to connect the studio keyboards to my MacBook via Ethernet, it just kept on going. CPU usage is definitely lower than Mainstage, so this may keep the fans a bit quiter!!

Playing keys in a prog rock tribute band is never an easy call and requires such a complex setup some people will have been wondering why did it take so long, but with 18 minute long epics and 7 changes in a song, you have to get everything just right. Thanks for the people who make GP and support it on here, not something you get from the creators of that which will no longer be named. Tomorrow … here goes

Congrats and… break a leg!

After close to two years

What took you so long?

Tell us more — what band, what kind of music - quite a few people here are in prog-rock bands, including me (I’m one of the developers)

The main reason it took two years was Arturia collection V6, memory leaks. My studio Mac Pro was running our of memory all the time. Even with 48GB it ran into trouble. It was after an upgrade to V8 that it all started making sense, suddenly stable, that was earlier this year, then it was build and testing. Moving a whole ruck of sounds from MS took an age until, I discovered MS had an Auto Sampler, then was just a few weeks to get the last of the sound over, a couple didn’t sample well.

The mapping for playing was entertaining as I made a lot of use of the dynamic split in MS, so had to take it slow to get the new hand positions, going back to MS to remap that so I got used to the new positions. Everything now runs on an 88 + 49.

What music? Fish era Marillion, this has been a big step up from my classic rock covers work, especially as it has some established Prog names in the band, not me I hasten to add.

… and tell us how it was

Well it was uneventful! The best type of eventful 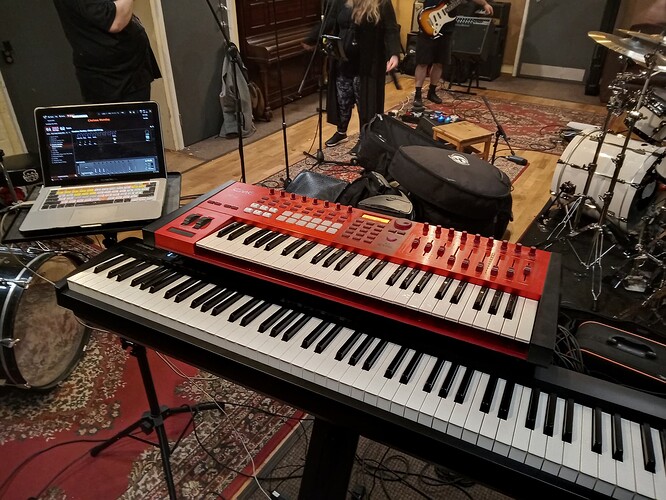 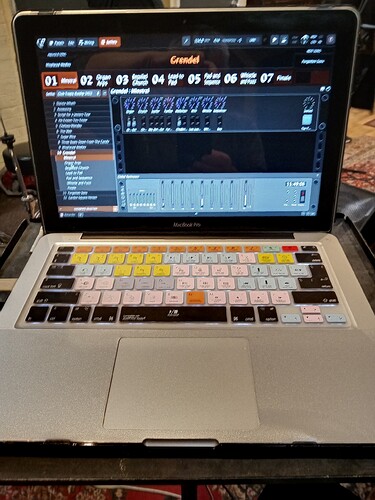 Just as an FYI.

The lower keyboard is a Roland FP10, I was shopping for a second controller when I played this in the shop while waiting, it has the ivory feel PHA-4 action, nothing else came close to how good this played. It was the right size and weight although it lacked controls (including aftertouch), the number of controls on the CME made up for the lack on the FP10. So this is one of the reasons the MIDI routing became a little more complex, as the pitch and mod wheels, expression pedal from the CME can also control the VST’s being played from the FP10 and the single sustain pedal from the FP10 works on the VST’s played from the CME.

One thing I have done in this rig is made sure that both boards work with factory reset settings, so this is MIDI channel 1 from each board, in the case of the CME, I select the Logic mode.

Are your laptop keys mapped to functions/macros, or are they coloured for some other reason?

It has a ProTools overlay on the keyboard, I forgot to take it off before the picture.

Hmm… perhaps there should be a GP keyboard overlay, which makes use of the gig script that converts key presses to useful actions?

Offtopic: very nice music. Long time ago I played around half of the album Misplaced Childhood for a one time event. Have fun playing Marillion

My intention is to move the MAC away from the front and put it behind me, the usual thing of confidence has stopped me from doing it so far. I will keep an OSC control panel on the rig so I can see song and part information. But when I am playing absolutely everything is controlled from the CME. We have walk on music and that is played from this rig, and started via OSC on a phone. We have WiFi on stage as it is used to connect everyone to the X18 so they can set their own monitor mix. I connect the MAC via ethernet and it can receive the OSC to select the song and play the walkon.