Is there any type of workaround that would fix that?

OK, a little bit of a hack, but is is working

use this little rackspace script

And this is the example gig
ShowParameterValue.gig (38.6 KB)

The Parameter 24 you see in the top of the plugin window when you move a plugin parameter.

I did the same with the [value] tag as the knob-widget’s caption, this will permanently show the connected parameter’s value (if supported by the plugin!)… then i used a little script to set the text of the label-widget according to the caption of the knob-widget. This also works in both directions and you won’t have to deal with cryptic parameter numbers within the script.

(i used the free Surge Synth plugin in my example)

That works perfectly! My old eyes thank you!

EDIT:
BTW: if you’d have to deal with more knob/label combinations, it could be useful to put them in arrays and then use the “On WidgetValueChanged()” callback for multiple widgets, that way you will receive an index number which you then can use on the regarding arrays, so you would have to use just one single callback for all of them. But this approach may depend on the things you are about to do besides just syncing the labels…just a thought.

Which edition of the plugin are you using,. Try changing to another format VST2/VST3/AU…

Some plugins work better with parameters with different editions.

Yes, I started with AU, but right now I’m using VST3 and it seems much better with the parameter passing.

So after a dicussion with @dhj who explained me how things work, here is the right way to do what you want without scripting: 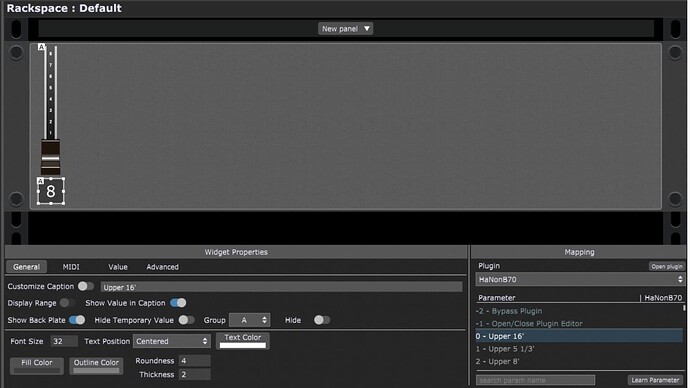 Ok, that is a game changer. So much easier. Now the only issue is going to be the limit on the number of groups. Building panels for a B3 plugin and you use up 20 just for the drawbars…

Why not use the drawbar widgets alone?

I’m building out a master panel for B-3X. My goal is to be able to easily see all the important settings so I can build variations from the panel instead of working in the plugin and having to tab back and for through the different pages to see the settings.

I’m also duplicating a lot of the B-3X patches into my Nord, which isn’t super close to my laptop, so being able to easily see the drawbar setting as opposed to trying to read it off of the drawbar itself helps quite a bit.

OK, so until now the devs had perhaps no reason to increase the number of groups… But things change and GP too. Another solution would be to be able to increase the font size of the widget labels. Well, lets wait and see what the future of GP will bring, I was often amazed

Regarding the specific question of drawbars, as an organist I can tell you that no organist read the exact number of each drawbar while playing, only the form of the drawing sketched by drawbars matters. Regarding my personnal case, my visual acuity is declining faster than I’d like and so I have no choice but to spend more time playing music than reading text labels.

Agreed…you pull/push them and adjust by ear!