Hi. I have a presonus audiobox go 2 channel midi interface. I use the vocal and guitar inputs. I have a Vox vx50ag with a mic and guitar input. I would like to know if its possible to use the left output channel of the presonus for instrument and the right for vocals separately using gig performer 4. This way i can use the xlr input on the amp for routing my vocals and instrument input for the guitar alone. When i tried to do this, the vocal effects were leaking into the guitar channel. Thanks in advance. Joe

Here is the image of the presonus interface 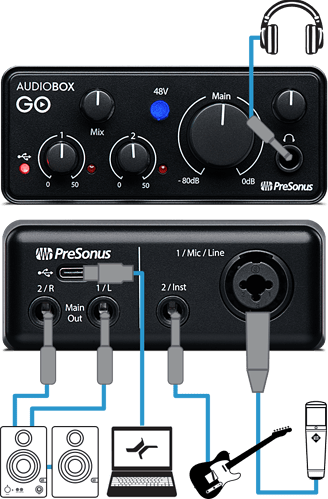 Hi @josephst9, welcome to the family.

Should be possible.
Just check the AUDIO In in Gig performer, if there are the different signals coming in.
Do you have a control software for this Interface?

From the pictures I see it seems that both input signals are routed to the same 2 outputs.

How can I route an input to a specific output. e.g. input one to left output...

Hi there. I am using my AudioBox USB96 to add an additional 2 mic-pre inputs to my Tascam US-1800 ... the left and right. Thanks in advance ...Matt

Not sure if you can feed the output signal from your audio interface into your amp’s instrument input without running into issues, because the interface’s audio out is at line-level and low impedance, while the amp’s instrument input expects a much lower level and a high impedance.
From the wiring theory within Gig Performer this is no problem, but i’m afraid that this combination of hardware wont’t work very well.
I just saw @pianopauls post that says each input of the Presonus is internally routed to both output channels at once - well, if that’s true, you can’t separate them and i see no chance for you to achieve what you wanted to do.