I’ve been asked to share my setup with y’all. It isn’t entirely complete, but it’s close enough to post! 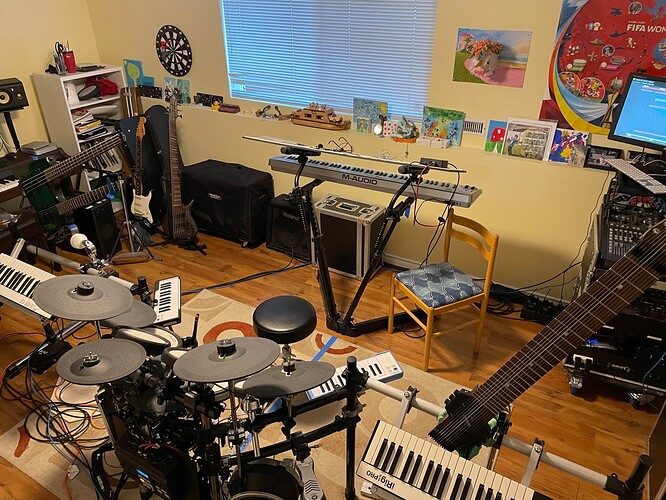 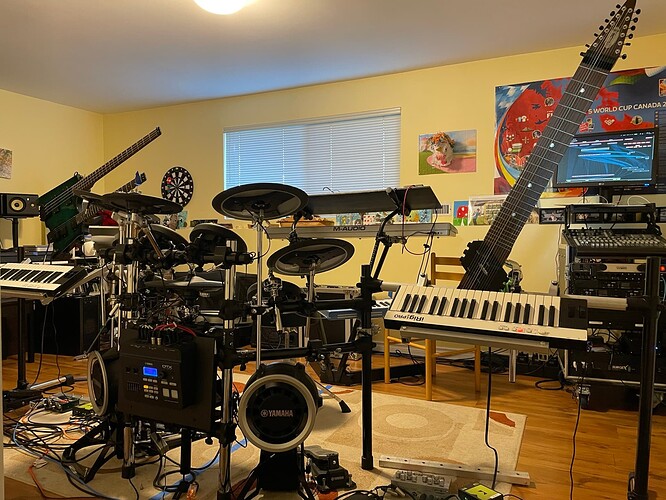 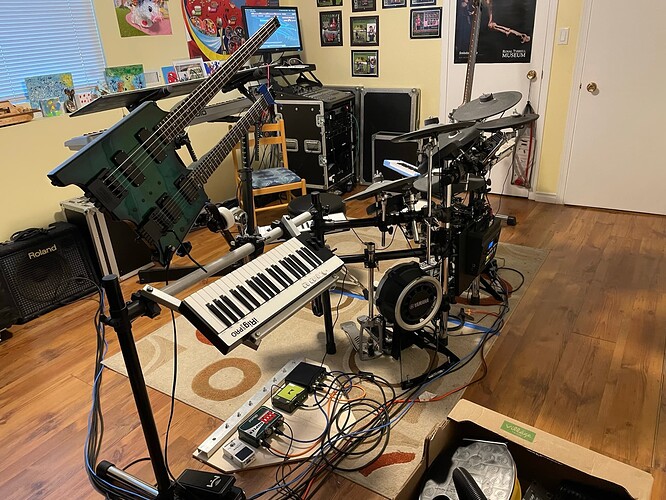 In concept, I am using Gig Performer as an almost headless routing tool, mixer, and backline for my band, Rocket Surgeons. The goal of my project is to allow several singing multi-instrumentalists to range from instrument to instrument (which are all mounted on playable stands) within the course of a given song; while the rig plucks loops from the live performance and plays them back through the processing/plugins as needed within the song structure.

To accomplish this, I’m using two Mac Minis in a 1U sonnet rack-mount enclosure: a powerful Intel i7 with 64GB RAM which hosts Gig Performer, Audiogridder, and a Dante PCIE I/O card (The 'Performance Mac), and an older i7 2012 with 16GB RAM running Ableton Live and Dante Virtual Soundcard (The ‘Conductor Mac’.)

(I also make heavy use of Bome product… there is a BomeBox at each of the ‘musician stations,’ which captures MIDI performance and control data from keyboard controllers and foot pedals, then sends the capture data over my ethernet network for routing via Bome Network Pro.)

The Performance Mac provides all the DSP, the routing for front-of-house multitrack (to the 38 mixer channels), front-of-house 2-mix (when there’s nobody to man the mixer), in-ear-monitor mixes with a reverb bank, and the options to send click, cues, and a bluetooth audio feed to the front-of-house mix (for rehearsing without in-ear-monitors.) It also handles some fun bus routing duties described later on.

The Conductor Mac plays back Ableton Live sequences. During performance there is typically no audio or audible MIDI played back from these sequences… apart from click (to the in-ear monitors), and vocal cues (like countoffs… also to the IEMs.) What IS played back is all the automation for Gig Performer through the course of the song. This (silent) MIDI data is sent via Bome Network Pro to the Performer PC where it selects a rackspace, automates widgets, and controls multiple instances of MSuperLooper for the capture and eventual playback of audio loops as part of each song’s arrangement.

The actual ‘Live’ audio data and midi performance data arrive at my ‘Performance’ Mac via network (Bome Midi Pro and Dante) and are routed into my global rackspace via the sound card and Bome Network Pro. They are ported from there directly into the local rackspace… but you’ll notice on the image that there are two other groups of twelve audio signals merging with them at the send point… these are the ‘Virtual Bandmate’ feeds and the ‘Recorder Playback’ feeds. 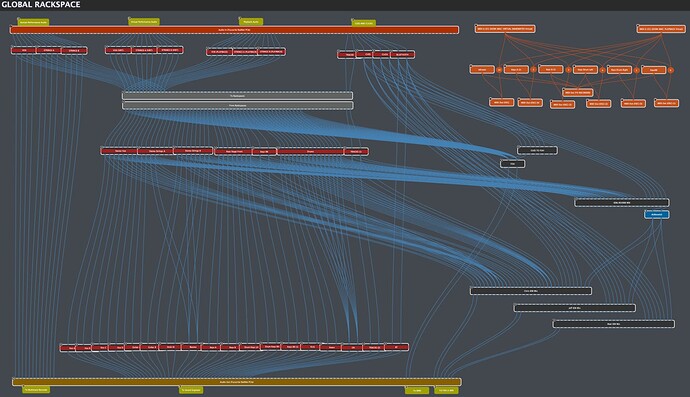 The Recorder Playback feeds are used for 'Virtual Soundcheck." The band and I can record a take of a song and then listen back from the audience area. Since these feeds are recorded pre-processing and share the same virtual signal path as the live performance I can make adjustments to the mix, EQ, and ambience levels (not to mention any of the FX: guitar channel drive, vocal saturation, etc.) during playback… setting up the live engineer (if there IS one) for success.

The Virtual Bandmate feeds are used for arrangement and pre-mixing… as well as for rehearsal. These feeds are sourced from Ableton Live, which serves not only as the ‘Conductor’ of each song (it provides in-ear clicks, in-ear vocal cues and countoffs, and handles all automation of plugins) but also saves a ‘perfect take’ of all performances both MIDI and audio. These allow for setup and configuration of the complex looping routines without having to actually provide the performance while doing so. They can also be used as tracks for rehearsal, or even as a virtual bandmate during a show.

You’ll also notice the orange MIDI complex in the upper-right of the global rackspace wiring diagram. These make use of Bome Network Pro and OSC blocks to mirror the function of the three audio busses (Live, Virtual Bandmate, Recorder Playback) in the MIDI realm.

Also apparent is the ‘straight-through’ routing along the lefthand side of the global rackspace. These are the pre-processing feeds to the Recorder.

Finally, you’ll see the outputs of the ‘FROM LOCAL RACKSPACE’ block splitting off to feed the 38 Dante feeds to the FOH mixer channels, a 2-Mix feed for rehearsal/performance without a hardware mixer, and various mixers for multiple IEM mixes, complete with a reverb bank. There is also a mixer or two to send clicks, cues, and/or bluetooth audio to the 2-mix for rehearsal without IEMs.

The local rackspaces are more straightforward due to my strong resolve to keep the craziness in the GLOBAL rackspace. Here is the default local rackspace wiring with Virtual Instruments but no FX: 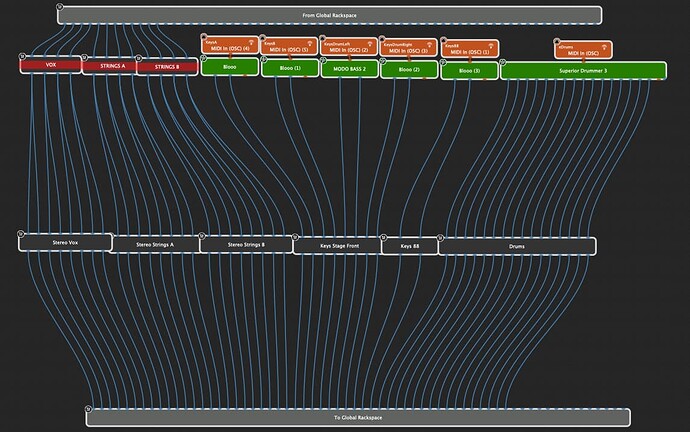 Screen Shot 2022-12-12 at 2.24.07 PM1146×718 103 KB
Here, I can process and reroute each performance audio or MIDI performance data feed either PRE or POST mixer. Not shown here is my MSuperLooper setup… I just tore it down to recreate my rackspaces for cleanliness and ease of troubleshooting. I can post later in the comments.

This all took ages to design, purchase, and install… and there is more to go! I am making my own MIDI foot pedals, replacing the Yamaha DCT700 with a MegaDrum brain, and eventually adding polyphonic pickups to the guitars and Stick (for virtual pickup placement and per-string processing via Cycfi Research’s Nu 2 Modular Pickups.) If people are interested I can follow up here. I will also eventually be lighting up the Rocket Surgeons Facebook and Website… once I get near enough to performance and need to start attracting fans.

For now? Practicing my simultaneous drumming, left-hand-keyboard-bass, and singing. Not to mention continuing to learn the Chapman Stick… which is NOT an education to sneeze at!

Have fun out there all, and Happy Holidays! 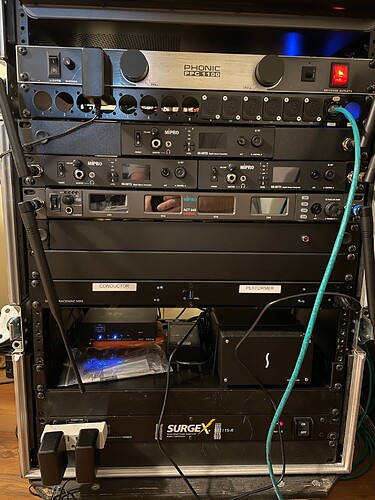 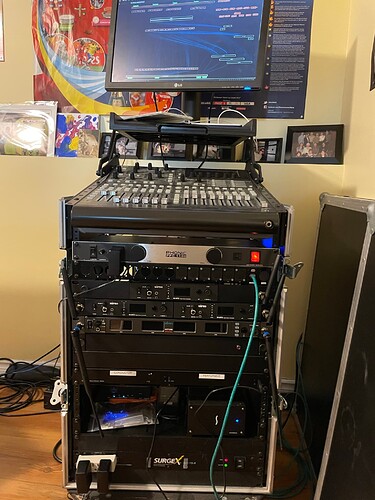 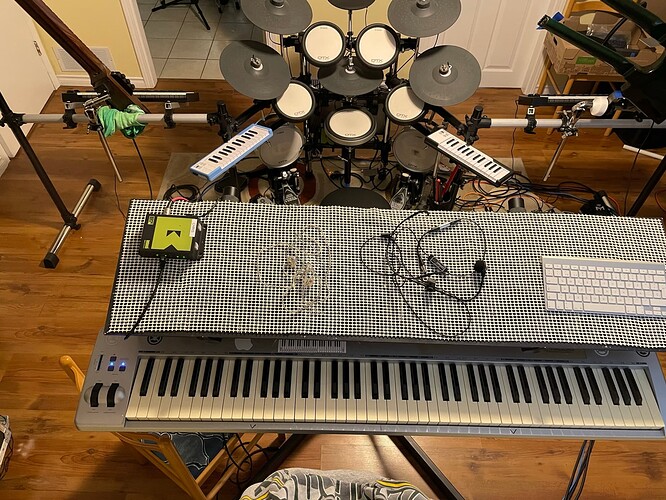 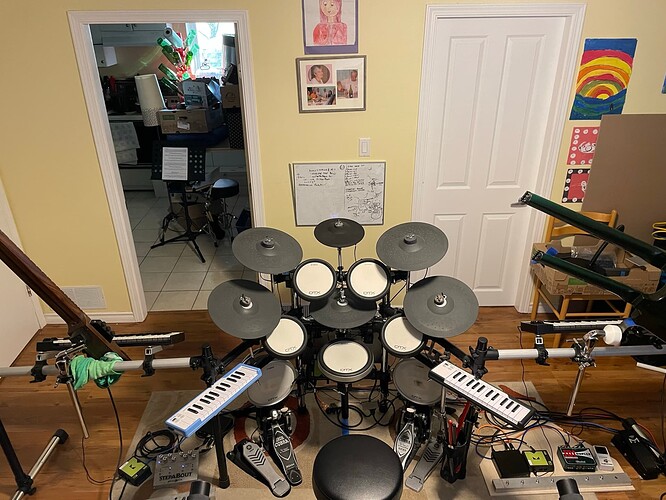 I’ve been asked to share my setup with y’all.

Thank you very much!

I didn’t want to be the only one seeing photos of your remarkable setup!

Amazing. Thanks and congratulations to you and to the outstanding GP development team - what a product they’ve created!

Wow!! Quite an undertaking!