With Kontakt 5, there were three different ‘versions’ of the plugin you could select to put in your rackspace. Two of them loaded on to the back rackspace view with a lower number of outputs. I always chose the lowest number (Kontakt 5 8out). With Kontakt 6, there is only one choice and it displays 32 outputs and takes up a huge amount of screen real estate for even one instance.

Is there a way to reduce the number of outputs used/displaying in Kontakt 6 in GP?

I have VERY rarely used more than a single stereo pair.

(Just right-click the plugin block and choose “Bus Layout”, then you can control the type and number of output pins.) EDIT: Doesn’t seem to work with Kontakt - just tried to change something, but didn’t work.

Or use the “Options” menu. Under “General” you can adjust the maximum number of the exposed channel connectors globally. 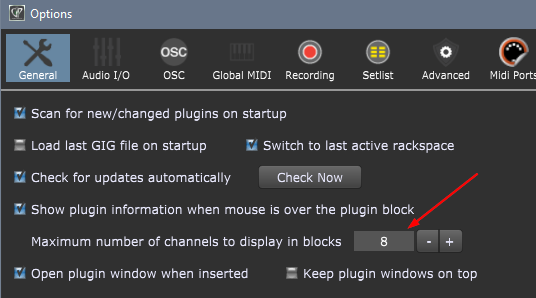 Our next version of Gig Performer will address this issue for plugins such as Kontakt.