I’m having an issue with Gigperformer ,gig working with predictive lenabled but crashes when loading with predictive loading disabled… Computer is running on windows 11 with a 1260P 12 core cpu , 64gb of ram and 2tb drive. System debloated and optimized. I was assuming that this configuration would load fine on this computer. interesting things is I can run without predictive loading on a m1 mackbook pro 16gb ram tb drive (but has choked a couple of times on a live show hence I thought this would be the solution… Is there something I’m missing on the windows system? Any help would greatly be appreciated. I’ve checked with speccy app and ram usage is around 30 per cent. So I’m wondering if I have hit a cpu threshold limit.

I suspect that one of your plugins is crashing.

When a crash occurs, please select What does this report contain? 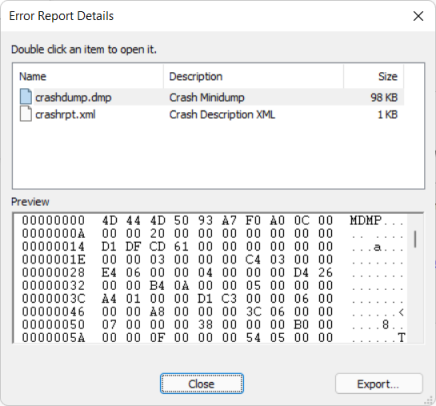 Give your report a meaningful name and save it in the desired folder: 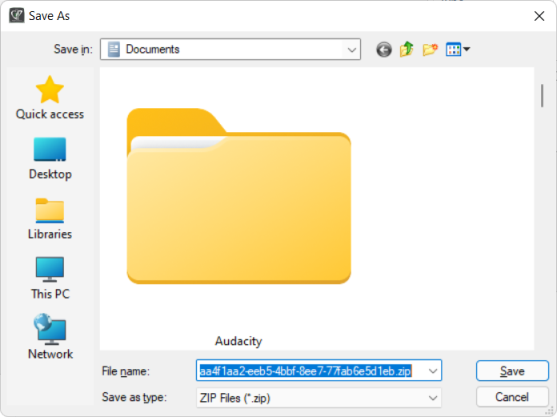 I think it’s fixed. As suggested I chased down the crashes. I knew I was stretching it a bit with the waves plugins. I ended up deleting all of them and that really improved performance and stability. On platform m1 power book, monterey, crash report indicated IK Multimedia B3X organ was causing the crash. I removed all waves plugins and Ik multimedia plugins. Everything is stable now. I ended up replacing B3X with VB3 on windows 11 platform. 12 core 1260p 64gb ram and 2tb drive (HP Envy Touch). That will be my live computer Everything is stable and I’m excited. Thanks for all the great advice and suggestions. Systems appears stable now.

Be careful with VB3-II. I had terrible crashes and had to replace it with Blue3.

Hmm, I was thinking of picking up the IK B3-X…

Suggestion:
Investigate ways to make use of multiple instances of GP to balance the load of what you’re trying to accomplish. You can also check out Audiogridder for load balancing as well.
[blog] How to offload the processing of audio plugins to remote computers using AudioGridder

The B-3X plugin is CPU intensive, but it causing a crash is more an indication that you’re trying to do too much in one place.

Thanks for the warning on VB3 Jeff. I’ll investigate.

IK B-3X- is my favorite B3 emulation but I think it has crashed GP4 on a few occasions. It is also CPU intensive and takes ta long time o open when editing. So far VB-3 has been stable and nimble in my new install on windows I’m wondering if anyone else has been having VB3 crashes on windows 11.
I’ve checked out the Blue3 but in the online youtube demo’s I didn’t like the upper rotor sound. Is there anyone out there using the vb3 successfully without crashes ?
p.s. just found some topics on VB3 plugin. I’ll investigate those.

Thanks everyone (great community of knowledgeable people). I appreciate all of the input.

Thanks edm11, I will investigate multiple Gigperformer instances.

Is there anyone out there using the vb3 successfully without crashes ?

Yes me. I’ve been using it for several years and it has always run reliably. When VB3 II came out, I bought it. But when I tried to load it recently, it needed re -registering it and the developer hasn’t responded to my email so far (I’m wondering if he is still in business?)

I like VB3 because it is simple and only needs the serial input once. Comparing VB3 to VB3 II, I don’t think that VB3 II is any better than the original in terms of sound quality and rotary operation. I have fast/slow set to momentary and trigger it using the whammy bar on my digital guitar controller.

I just recently installed it on new windows 11 computer. You need to go to their website. Message support about installation on a new computer. They send an automated reply to your email address. It states please deactivate a vb3II installation (you have reached the installation amount). On their list of activation I removed my old computer. Then when I installed VBII it requested my unique user i.d. authorization. Very simple install.

do you know what kind of latency audiogridder has also how stable is it for a live performance. Thanks, sounds like this could be the potential solution.

What kind of crashes did you have with VB3? I’m trying to get my live gig stable as soon as possible.

I used VB3-II. Crashes would occur simply having a rackspace with the plugin active and playing a lot of notes. When it crashed Gig Performer crashed as well.
Yes, Blue3 has a different sound character so it took some tweaking to get the patches sounding close to VB3-II. With Blue3 I have a stable rig and have not had a crash.
With VB3-II I used the VST3 version, not VST2. Don’t know if VST3 is more prone to crashes.
The developer knows these crashes seem to happen in Gig Performer but not in other DAWs and VST host applications.
There are guidelines for writing good code for VSTs. Gig Performer reveals these implementation flaws for this particular VST.
For about a year the crashes were infrequent but then started occurring more often. I suspect some underlying Windows component update may have started it.
I finally gave up on VB3-II for live gigging but I still use it for recording in the studio. Reaper is my DAW. No crashes in Reaper.

On their list of activation I removed my old computer.

I can’t find where to login. So, where do I find the list of activations?

Select VB3-II from the dropdown menu and supply your activation code.

Select VB3-II from the dropdown menu and supply your activation code.

Tried that many times. All I get is a message saying “ERROR: Your licence cannot be activated on this computer because it was deactivated” At the start I am told that I have three activations available. Very strange. The developer has not responded in over a week.

I believe if you deactivate a computer authorization in VB3 II, it may be like Modartt. That computer is permanently de authorized. I don’t know if I’m right but I am offering that as an possible explanation. I’m not able to test that theory. What I did to authorize my new computer was I selected support on their site then selected contact us. Explained I needed an authorization, I received an automated email with instructions.

Hopefully they will respond. I ran into problems with my first Windows feature update and they had to reset my license key.

Hopefully they will respond.

I am wondering if they are still in business. No reply at all to at least two support contacts that I made.