I recently played a Farmer’s Market where they placed me in a gazebo. The peaked roof caused a bass resonance to happen at not much volume at all. I struggled with the sound for the rest of the gig. So I bought a 15 band dual Graphic eq with FBQ feedback detection for possible future problems. At the next gig which was under a verandah, the bottom three sliders blinked as the FBQ system reacted, and the bass resonance (a booming sound) happened again So I pulled the bottom three sliders (25, 40, and 63) fully down on both channel’s and the resonance stopped. I had good sound from then on.

My question is: Should I be able to get the same control by using a vst graphic plugin instead, placed in GP’s global rackspace? This would save having to use another piece of gear and running extra cables. If yes for the graphic eq vst, can someone recommend a suitable plug in for me? Many thanks.

Do do this you would likely need to change your 300+ songs (in each rackspace) to direct the audio output the the Global Rackspace for the plugin and then back to the local rackspace (if you want further audio process) or to your audio out (if not further audio processing is required) . I would weigh the effort to do this with the pain to carry the extra gear depending on how often you run into this problem.

Most graphic eq VST would probably work just fine if you decide to go that route.

As you know I’m also fairly new with GP so I’m sure there might be some other opinions that would have better merit than mine. If there were a way to reduce your rackspaces, that would be optimal, however I realize your gigs are driven heavily on song requests which is why you have so many in your GP file.

@bigalminal It is possible to get the same type of control from a VST EQ plugin - my Waves GEQ 30 Band Equalizer has the same bands you mention (and more), but to the best of my knowledge there is no way to implement an automatic feedback adjustment for this in GP. If you’d like to see the description and specs for that particular plugin the link is HERE. This particular plugin is $30 if you wait for one of their sales (which is almost always), and it comes with 8 different “versions” of the plugin in both VST and VST3.

However, as @SteveC-Bome said, depending on your setup it and how you use GP it may be more work than it’s worth. Having said that though, the more I use GP the better I like it and am setting it up for use with both setlists and songs and generic settings that I can use with anything I choose to play at any time.

Hi Al,
you surely can place an EQ right before your final audio output in the Global Rackspace, provided that the audio from each local rackspace is going through the global one.
I’ve done this too, but i am more the “parametric” guy when it comes to EQs.
I use the Melda parametric EQ which has a RTA (Real time analyzer) already on board, so i can see at a glance what’s going on in the sound spectrum. But there are separate analyzer plugins too, so you could use other EQ plugins with them as well.
What i would recommend:

I just tried it in my room… 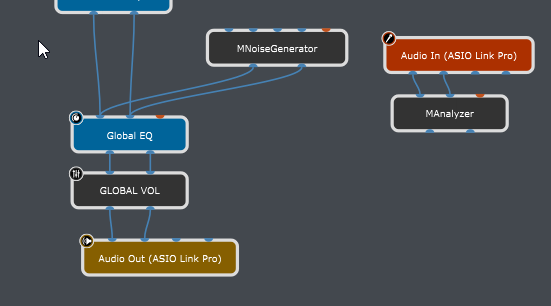 This is the analyzer curve without EQ’ing (upper right): 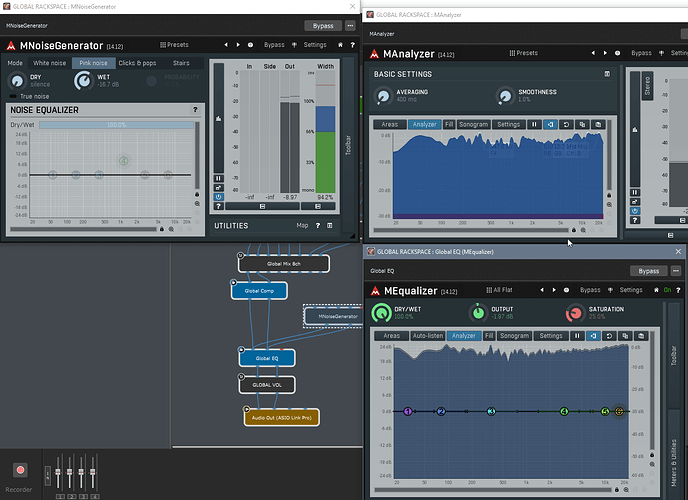 And there i tried to flatten some frequency “hills” with the global EQ: 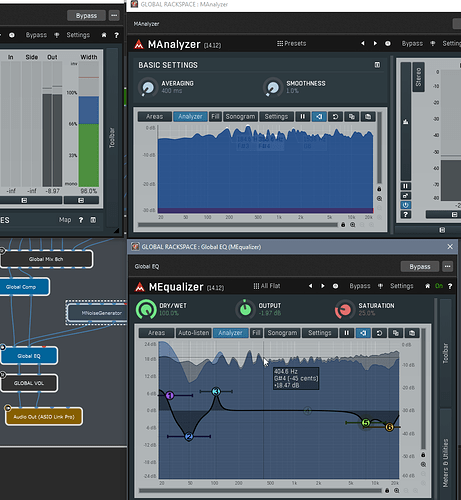 Hey everyone. Great comments from all here. Much appreciated.

I am happy with my sound at home. And also, outside when I play, so long as the wind effect is low on my mic. As I said, that resonance only happened twice because of the circumstances i.e. under a gazebo low peaked roof and under a verandah.

My idea was to future proof myself by adding the global vst eq rather than the physical eq and associated cords “just in case,” meaning that I would always have to carry the eq box at all times to have it available. By adding in the global eq in each gig file, I would always be prepared.

I owned a British mixer years ago that had a special button on each channel that when pressed, cut out everything below 100hz. The manual stated that ‘mud and rumble and stage noise’ would be eliminated by using this button. I always used that button on each channel. There was no loss of bass response either that I noticed using that mixer, hence my thoughts of the global eq with the three bottom sliders permanently pulled down.

I appreciate the help and thoughts from you guys, and will chew over what I will do.
Cheers, and thanks again.

you surely can place an EQ right before your final audio output in the Global Rackspace, provided that the audio from each local rackspace is going through the global one.

Hey Erik. I had a good look at your screen shots etc. When You applied the eq mods after analyzing the wave form, did it sound much different when you played a gig? Or did you find that you had to change things a bit?

To be honest, i haven’t yet had the opportunity to play a gig with this setup… it’s just some kind of “prophylactic” measure i took.
But on the other hand, we also have a digital mixer (Soundcraft ui16) which has this kind of analyzer/EQ already built in so i most probably won’t have to actually use the “Master EQ” in GP.
I would say that if the room causes some freuencies to stand out or to vanish and you even that out with your EQ, the sound should stay neutral. It might be another thing if you had to use heavy EQ’ing to prevent feedbacks to come up - this will of course change the sound to some extend.
So in combination with a measurement microphone and an analyzer you will instantly see what’s going on and you could adjust it with the EQ and your ears - the analyzer would serve as a neutral kind of indicator.

Are you playing through some kind of a PA system? If so - they all come with an EQ.
You typically have to always “EQ the room” you’re playing at and that’s best done at the output of your mixing console.

It’s a REALLY important step to get good, consistent sound anywhere you play and yes - it is different in every location and can change just because of humidity and the number of people listening to you.

I’m not sure what interface you play through, but I use a Behringer XR18 for both interface and submix. If you used something like this as your interface, you could simply apply the GEQ on the interface/mixer to fit the venue. You can also ‘save’ those presets for each venue you play at and tailor for the next time you play there.

Exactly! It’s the same with our Soundcraft ui16.