Hello everybody,
Hope you are all fine, in France we’ll soon have concerts and I hope this is for the best and that with the vaccine we can go this way for good…even if I’m not so confident in that

The new Mac Book Pro that will come out in a few months will be very very good but also very very expensive (I think something like 2700€ minimum).
This is a crazy price and I was wondering if buying a Mac Mini + an Ipad + an external screen wouldn’t be a better option.
The Mac mini is very little and lightweight, it is very powerful.
The iPad can be used for several purposes (Staffpad, music apps that are really good), as an external screen on stage etc.
and then you can even buy an external big monitor for your house work (composition etc).

What do you think about it and do you think it his possible to use the iPad as an external monitor on stage for GP ?

Thanks a lot if you have time to answer

So, I used a Mac Mini previously. It did the job. Since switching to Gig Performer, I switched to a Windows laptop. Just a couple thoughts:

Is the fake screen dongle item you’re referring to is for Luna Display? If so it’s actually a real dongle as Luna Display won’t work without it. Air Display actually works pretty well for me when I use my IPad Pro as a monitor for my MacMini. The only bummer is you can’t use it as a touch screen. I’d be curious about how well Luna Display worked for you if that’s what you were using

That’s what I do with a GigaByte BRIX NUC PC installed under my keyboard, but it has a Core i7 running at about 3GHz, 16Gb RAM and a 2Tb internal SSD. It seems the MAC Mini is limited to 8Gb of RAM…

The M1 Mac Mini offers optional 16GB RAM. But you can’t upgrade the RAM later, so get the extra RAM when purchasing.

Ah yes, and there is also a Core i7 version with up to 64Gb RAM. But then prices jump quite high too.

) and it is really super. Not to large, not too expensive and much better then the 10" I had before. 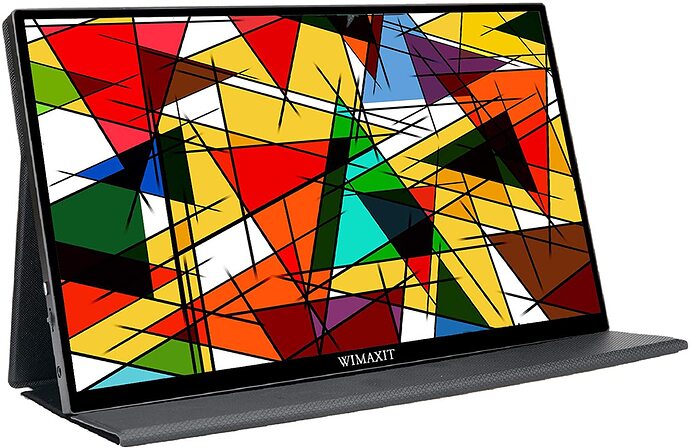 I haven’t used Luna Display, but looking through their information it looks like their dongle does something similar. It is also known as an HDMI headless dongle. The idea is that the dongle makes the Mac think a display is attached. Without it there can be challenges getting past T2/Filevault, and losing the screen resolution after a reboot/power cycle. It looks like you can perhaps get past this if you disable Filevault. With Filevault, you will need a monitor to do the first login after every reboot.

I’d just test it to make sure that you can get it up and running from “unplugged” without a monitor.

I’ve have tried Duet Display and unfortunately it suffers from what the developer calls letterboxing and it ends up not using the whole IPad screen for the display and after a year they still haven’t solved that issue. Closest one that I have is Twoman USB. It actually works as a touchscreen display but it introduces occasional audio artifacts when using GP. So yeah I would be curious if Luna Display really does work. One thing is if you were to go for a MacBook Pro you most very likely will need a hub as they only have 2 Thunderbolt ports.

Yes that’s true about the actual MacBook Pro, but the new one might have other ports

any way I’m already using a powered hub, but thanks for the concern

So is the WIMAXIT 14” monitor at a fraction of the price of an iPad Pro. Of course nothing against the iPad Pro I will even buy one soon. But it is… well… expensive!

The new Mac Book Pro that will come out in a few months will be very very good but also very very expensive (I think something like 2700€ minimum).

you should make something clear to you:
the todays M1macs have 8 cores, 4 efficiency cores, and 4 performance cores.
the upcoming MBP will have more efficiency cores ( afaik) .
But: GP3 runs (thats how i still understand it ) on just one core (per open instance)

I´d say, you win nothing in regards to CPU power vs. GP3 when taking a mac, bigger than the todays macbook air M1 or M1mini.

The todays MacBookAirM1 is allready perfectly fine…you don´t run it into any overheating and then throttling down just with Gigperformer alone.
People run the M1MBA into its cooling/overheating limits by loading 100 audio tracks…etc.

TL;…
i have 8GB RAM on my M1mini and i´m personally fine with that.
( i use NO sample based instruments for example)
but i would recommend to take 16GB of Ram anyway, if funds allow.

For GP3 alone, you want to look at the single core speed.
( again, thats where my understanding is…the developers are here a bit picky on the wordings one would use it seems / …i see the reason, though

i´ve not followed it any longer, but the next upcoming macs have to my knowledge no bigger single core speed, just more cores, and probably more GPU cores.
thats to my understanding not a win for any common GP3 usage.
Don´t let you fool by paper numbers.

correct me somebody if i´m wrong on anything ( GP3 using “just” one core “per instance”, for example)

But: GP3 runs (thats how i still understand it ) on just one core (per open instance)

Obviously we are not going to talk about what will be (or not be) in future versions of Gig Performer.

That said, I would point out that some plugins can independently use multiple cores (see image of Kontakt plugin options before for example) so I wouldn’t be too quick to dismiss the benefits of multiple cores. 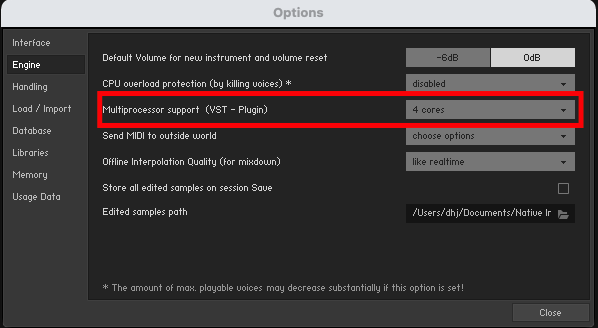 some plugins can independently use multiple cores

… but I’m sure there are more!

On the MBP with M1 processor, Diva on Rosetta2 plays 120 voices - if MultiCore is turned off. That’s a magnitude as much as a 2015 MBP with Intel i7. However, with Multicore turned on, drop outs appear at 30 voices already. Luckily, the M1 is so powerful, there is no need for Multicore. A single core can easily handle Diva’s full polyphony at best setting. Using Rosetta.

We expect our native builds to perform better, particularly as we’re going to support the new multithreading paradigm for audio plug-ins. Those builds are coming a long nicely, a first beta should be available in a few weeks.
"

That said, I would point out that some plugins can independently use multiple cores (see image of Kontakt plugin options before for example) so I wouldn’t be too quick to dismiss the benefits of multiple cores.

ahh exactly, that was the thing !
…i personally don´t use any of these plugins. lucky me

However, with Multicore turned on, drop outs appear at 30 voices already.

…thats not a surprise to hear.

Those builds are coming a long nicely, a first beta should be available in a few weeks.

one thing to point out: at least with Reaper is it the case, that you should run everything ( Host and ALL VSTs ) based on the apple silicon versions, if you do so, or then turn otherwise towards the Intel versions for everything.
…i´d be surprised if GP3 (or4) was different in that.

If somebody HAS to use things like the fat U-Hes, is it allways also an option to put them into a own GP3 instance.
again: point here: is it worth to spend 2700€ on the upcoming M1Macbook pros ? or is the M1 mac, as we have now, good enough ?

what i can add from my experience with the M1mac:
if you run several GP3 instances in parallel, is the maximum possible CPU load per GP3 instance dropping down a bit, vs. just running one GP3 instance.
also: using bigger buffer sizes ( above 128samples) does not bring as much win (on the cPU cycles front) as you would have thought it does, coming from intel PCs/Macs.
The sweetspot area is to me: 64-128 samples. i settled now, to quasi allways use 128 samples.
( some VSTs like the ones from zynaptic for example might change that ).

I don’t know if it’s relevant and I’ve seen on the community forum that it’s not the way GP acts but it’d be nice to have multicore activited or not in GP.
I’m also wondering if a 10plus core MacBook pro M2 will not be over powerful.