Extraordinary design with some nice features… 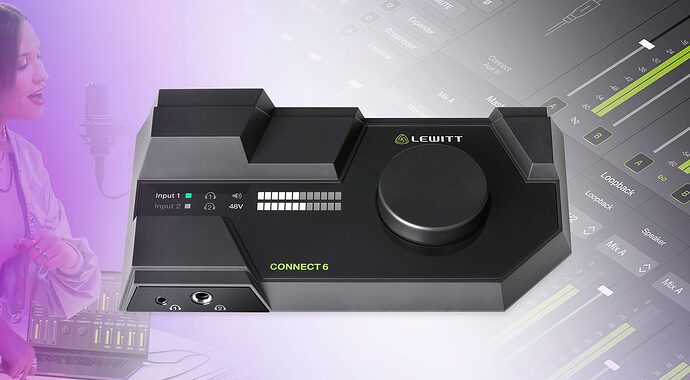 The Lewitt CONNECT 6 USB-C audio interface offers plenty of connectivity and DSP-based routing and FX for streaming, podcasting, and more.

How good is the ASIO driver? No mention of it in the article. On their website, the only mention is in the specs section.

They appear to be a hardware manufacturer (microphones). Software development is a WAY different beast. In-house development? If so, new hires? If not, outsourced to whom? Unlikely to be RME, or any other competitive audio interface manufacturer.

I would definitely not be an early adopter, no matter how good the hardware might be.

And I’m not a fan of controls on the top. Would not work in my studio at all.

I have my 1810c arranged so that I can get at the two mic/instrument inputs with the laptop open. 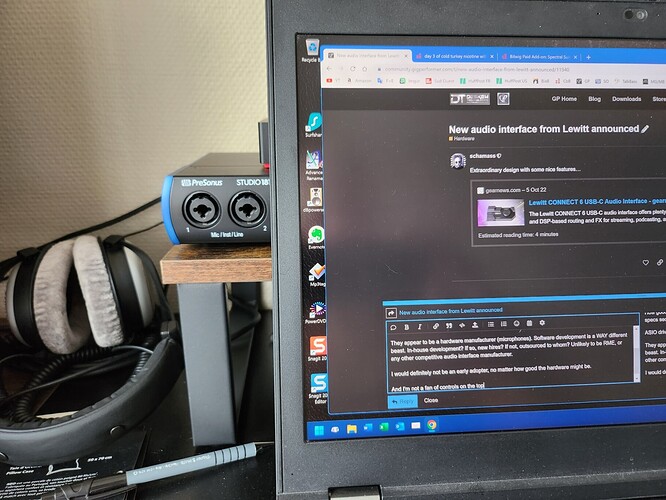 Well, yeah… it’s just an announcement.
When it’s available on the market, there might be some deeper reviews of it and then we will probably see if it’s suitable for the live-musician or if it is rather designed for broadcast / playback purposes.
I found it to be interesting, just because of the unique design.

This is a primary reason I switched from PC to Mac. I’m tired of relying on manufacturers ability to produce an ASIO driver for PC. It is a haphazard crapshoot in many instances. Trust me, I’m not a Mac bigot on the whole, but things became much more stable after switching to a Mac.

I’m not beating on you @xpansion, but maybe I come at it from a different time frame. I go all the way back to Macs running Motorola 68000 chips. I had been doing real-time system control software development on PCs running DOS and then early Windows, coding in assembler and a little C. I played around a little bit with the early Apple computers, but couldn’t get the necessary access to the physical hardware ports I needed for my communications drivers. When Motorola hired me, they forced a 68K Mac laptop on me. I hated it. They relented, and I took my department’s engineers all back to PCs. Then I watched as Apple kept changing silicon, forcing major OS rewrites. There were TONS of incompatibilities between existing apps and current silicon. That’s still happening. How many comments in this forum have there been asking the poster if he/she was running Rosetta? Plenty. It’s still going on. Macs have their good points, I’m not denying that. I just have too many negative biases based on past experience to ever consider switching.

But I am happy for how well it’s working for you.

The top surface controls also exist on the RME Babyface and various UAD, Apollo, and Audient interfaces. I have an Audient iD14, a Babyface, and my brother uses one of the UAD Volt series with top controls.

They’re handy for desktop work, like if you’re doing video conferencing, podcasting, or DAW work. Much nicer to move those big top knobs than a little volume knob on a rack type unit.

On my main GP systems i use rackmount type units just because they fit better physically and i usually have stuff stacked on top of them.

Regarding software and drivers, i would guess they have a partner for that but i couldn’t find any mention of who anywhere. I’m guessing Steinberg for no good reason other than they bundle Cubase with the unit and the marketing speak about the internal dsp effects and iphone/android integration sounds a bit like Steinberg’s latest. Very hard to see how Lewitt did all that themselves for a first interface at that low a price point with that many features.