My rackspace for jam with s gear v3

You can adapt to your needs. 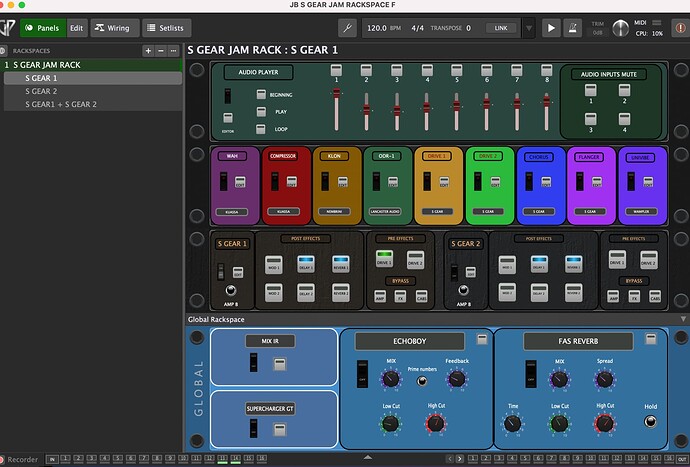 This is also a nice candidate for “Gig and Rackspace files”.

Aside from a scripting error that I see upon opening this file, I also see that you used AudioUnits. To maintain cross-platform functionality of gig/rackspace files, all plugins in gig and rackspace files include VST(3) plugins.

If you create a version with VSTs, I’ll create a new entry in Gig and Rackspace files.

I tried to correct the scripting error but do not know how to do it. It comes from a previous rackspace that was using script for Helix Native, I do not know nothing about scripting unfortunately.

I get this message

This is the script

Oh, well it means what it says. There’s a plugin missing or the plugin is there but it hasn’t been assigned the script name.

I think the AudioFilePlayer is missing the GPScript name and also the 8 Button widgets miss it.

The plug-in HELIX NATIVE (For snapshots) is missing but I do not need it. The sript is still there and I cannot cancel it.

I tried. I do not know how. Will try again later.

Open the rackspace script window and delete all lines.
Then press compile and close the window.
And the save the gig.

I worked! I did not know I had to compile and save again. Thanks a lot.

I tried to make a VST version of the rackspace but I get some bizare behaviour in the post effects section of S Gear 1. I do not get this in the Audio Unit version. I am not enough acquainted with Gig Performer to know if it comes from the S Gear VST version or from Gig Performer.

In the Audio Unit version I assigned widgets to put on or off the post effects for both S Gear instances. It works. When I open the editor and change the preset it still works.

In the VST Version it works for the initial preset but if I change the preset in the editor the widget call the type of effects instead the ones I assigned!
S GEAR JAM RACK. VST.rackspace (1.9 MB)

May be somebody could take a look at the rackspace and find what is wrong ?

Well for me it seems that S-Gear doesn’t properly initialize its parameter list…
If you import the rackspace into an empty gig (ignoring the missing mp3) and enter the “panel edit mode”, then inspect the widgets that would switch the after-effects, you will see that they all point to “nameless” parameters! After you simply have opened the regarding S-Gear plugin window and closed it again, the same parameters suddenly have names… but many of the rest still don’t.
You could check if this also happens if you use the VST2 instead of the VST3 (diffrent format, probably diffrent behaviour!).
Oh and maybe you should remove the MIDI assignments of the pedal bypass switches, just for completeness.

This has always been the case with S-Gear. It dynamically assigns the parameters. So “Delay 1 Bypass” in one preset may not be the same parameter number in another preset (and the name will be blank).

I’m sure the dev thought it would make things easier for the user - that only the parameters used in the preset appear in host automation lists. But the reality is that it makes it more difficult.

But the reality is that it makes it more difficult.

If not rather “impossible” to ever have a reliable parameter assignment… total bummer for the use in DAWs like Gig Performer.

So “Delay 1 Bypass” in one preset may not be the same parameter number in another preset (and the name will be blank).

Here’s the answer from Mike:

The S-Gear parameter list changes on each Preset because the rack is re-configurable. This has always been a problematic area because generally, plug-ins don’t do this and it is not always expected by the host. There could be some handshake issue between S-Gear and GP which results in the parameter list not getting updated after a program change. I will investigate.

Hopefully, this will be addressed in future!