OVERVIEW: We should have at least one main computer and a backup computer for live performance. This post explores the use of multiple computers in order to expand memory and CPU capacity. It also explores the idea of using the backup computer for such expansion, noting that we would need a fallback plan in case of a failure. Such a strategy could maximize quality and performance per cost, while still providing a way to complete a performance if one of the computers fails.

Computers with tons of RAM (as needed by many-sample users) continues to be a challenge. The Mac M1 computers are small, powerful, efficient, and quiet, but expensive and limited to 16 GB. You can build a PC with more RAM, but not necessarily small, light, cool, and quiet.

So I was thinking… what about multiple Gig Performer machines?

We should have a backup anyway, so why not put it to work? You start with one computer, say an M1 laptop. Your build requires more RAM/CPU, so you get a Mac Mini to run more sounds. You could buy a third computer as a backup (that could run either the primary or secondary config), or devise a “Gig-lite” strategy where one cuts down their samples and processing to get through the performance. If a computer fails, load ‘Gig-lite” in the remaining computer and survive the night, even if you have to play Cassio sounds, rather than your boutique B3. It’s a classic time vs. money situation. (If you don’t buy a full backup system, you spend time building and testing a “limp home” config, or compromise by playing from a limited set list from a primary-only computer.) it’s not for everyone, but Mac users (who are limited to 16 GB) who have backups could effectively double their capacity without breaking the bank.

The question is how to best configure Gig Performer on two computers. A fully parallel approach would be to replicate set lists and everything in the two systems. Just null out certain sounds in the A and B computers so they complement each other. This would require two audio interfaces (another backup!) and a mixer. It would keep latency low. There could be risk of the systems getting out of sync, so use hard numbers, rather than ‘next’ and ‘prev.’

Another solution would be to use the secondary PC as a sound module or effects box that is essentially downstream of the primary box. It just sits there ready to play sounds from MIDI. It receives audio from the first computer, mixes them, might handle reverb and final limiting, etc. It could still switch rackspaces, but might be simpler than the gymnastics of the primary computer. The secondary PC might focus on standard sounds, like a favorite piano, organ, etc. This is kind of a serial configuration, where you still need two audio interfaces, but no mixer.

Of course, there are any number of hybrid serial/parallel combinations. If one audio interfaces has enough inputs, you don’t need a mixer, etc. And Gig Performer has enough flexibility to handle whatever.

Note that you can get Mac Minis with 10G Ethernet. This could eliminate the need for MIDI cables and a second audio interface, assuming there are tools to set up virtual, networked I/O.

I’m wondering if people here have practical experience with multiple PCs with Gig Performer and if there are best practices.

Anyway, it’s interesting to note that a backup machine could be put to work. Also interest to note that, like a RAID setup, if you use N computers, you only need N+1 to provide a backup. You don’t necessarily need N*2.

(What I’m really trying to do here is justify use of M1 Macs, even though they are limited to 16 GB RAM. They’re so small, cool, powerful, and quiet! One computer might be enough for me, but if I run out of capacity, it’s good to have a viable expansion plan that doesn’t break the bank and to have a backup plan as well. I’m not building out a Hans Zimmer-like sample player factory, so I don’t need to craft any custom tera-RAM machines. But I still want to plan for cost-effective elbow room while using small, cool, silentish machines.)

I think you should add an abstract at the beginning of your prose. Did you ever think about the fact that we have non native English speaker here, for which it is probably a supplice to read even half of your post?

Having said that, the question is not uninteresting, but any backup solution mean that you have redundancy in your system. If you use the main computer and its backup at the same time, I am not sure you can have any redundancy

Yes, it’s not a fully redundant model. N*2 is the only approach that would allow an instant switchover. N+1 allows replacement of a failed unit, but it is not likely to be instantaneous. One would need to determine what failed, load the spare with the right Gig, etc. Failing from two PCs to one PC is more of a survival strategy, but the show must go on! But it beats failing to zero PCs.

It’s an interesting possibility to start with a main and a backup computer, but if there are some songs that have more complexity, one can use the spare computer as an “expansion pack” when things are going well. If a computer fails, not all is lost. Just skip the complex songs, or have light rackspace versions that use simpler sounds.

Regarding non-native English speakers, you make a great point. I’ve worked for Japanese and Korean companies in my day job for the past 25 years and have worked in international standardization. So yes, I value good communication.

When I started writing the post, I didn’t know exactly where it was going. Now that I do, I can add an overview.

The question is how to best configure Gig Performer on two computers. A

I assume you know you can (among other things) send and receive MIDI messages wrapped inside OSC. In several of my bands, where I have some legacy stuff implemented with Max, I send OSC messages from Max to Gig Performer to actually play sounds.

Ethernet MIDI software. MIDI over Ethernet uses the Real-Time Protocol for MIDI, (RTP-MIDI). If you are using a Macbook, then you already have RTP-MIDI built into the Mac OS. If you are running Windows, you will need to download the free iConnectivity RTP-MIDI Windows driver. 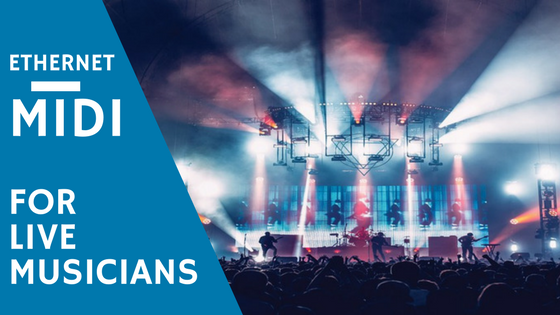 Go to any gig or concert nowadays, and the keen-eyed gig-goer is likely to see more computer technology on-stage than ever before. More and more artists are using computers for live concert playback and using plugin soft-synths instead of hardware...

Next, let’s see what audio over Ethernet solutions exist…

I think this is well traveled territory. I was just looking at the Waves eMotion LV1 group of solutions and they are not the only ones. You can start getting into some real serious money, plus you need to (or must have someone) that knows how to set it up and run everything. Of course, there are people and bands that get to this level of requirements and beyond. The point is the wheel has already been invented.

Anyway, GP can be installed on three machines. My main rig and NUC are fundamentally interchangeable. The main difference is the number of plugins that can be run on the NUC. I have been trying to move everything off my TR and into software which prompted the move off the NUC. However, I would think that if you are looking for 100% performance redundancy then you’d need two devices that are interchangeable performance wise as a minimum plus maybe a studio machine. If it gets beyond that then the networked solutions would be the path forward but in a different class from one man bands like me!

For audio, I found this…

Dante Virtual Soundcard Supercharge your PC or Mac audio applications with Dante connectivity, delivering instant access to any audio devices on the network. Record, process and playout up to 64 bidirectional channels of pure, lossless audio. PC...

With 64 bidirectional channels of lossless audio, one could build a large system. It could be much cheaper and space efficient than having separate audio interfaces per computer. For two computers, two physical interfaces make sense, in that the second serves as a backup. For 3+ computers, something like this could be the way to go.

It would be interesting to envision Gig Performer as not just a standalone app, but as a networked solution Maybe that would be an advanced, higher priced version. When keyboardists start sweating about efficiency, optimization, and limited resources, just let them know that it’s expandable with redundancy. Members of a band as well as the sound engineer are using Gig Performer? They set things up for personal use at home and network when playing as a band for synchronization, routing for mixing, monitoring, recording, redundancy, etc.

It’s out of the box thinking (literally), but there could be interesting possibilities.

For audio, I found this…

There’s been a bit of discussion of Dante on this forum. I recall we have a few forum members using it in a multi-PC setup.

It’s an interesting topic to me. My day job is related to ATSC 3.0 (NEXTGEN TV.) Stations went from analog over coax, to parallel digital, to a serial digital interface (SDI) over coax, to HD-SDI, to 3Gbit HD-SDI, which can do 10-bit 1080p video, uncompressed. For 4K, they are now moving to Ethernet. Coax has always been point-to point with fixed format and limited ability to move data. Now, with an Ethernet-based network, broadcasters can reconfigure in software, dynamically change frame rate and resolution, send complex metadata, etc.

When it comes to the transmission chain, ATSC3.0 is IP-based. You connect the caption generator, encoder, packager, and scheduler boxes with Ethernet, and because those functions are now software, rather than hardware based, the whole broadcast chain can be moved to the cloud. You can literally be a broadcaster with an antenna, exciter, a leased line, and web service contracts. The business side takes care of buying content and selling ads. Don’t forget to get a license from the FCC before you turn on the stick.

So, yeah, when I look at working with audio and multiple computers, that’s my context.

I had forgotten Vienna Ensemble Pro. I’ll look into AudioGridder, when the time comes.

Rumor has it that Apple will announce M1X minis and laptops on Monday with up to 64GB of RAM and roughy double the compute power of the M1. If so, the number of computers needed for a powerful, small, cool, and quiet system just got smaller. Still, knowing that one can expand (maybe even with the backup device) means we can design for sound and functionality with a focus on music, rather than optimization.

This topic makes we wonder if two GP systems can be wired for failover. Digital Performer does this, its’ the only DAW that does, where by in a split second, when one system fails the understudy system kicks in. It’s one reason why DP is used by major touring artists.

This interface was recently mentioned on this forum. It manages the automatic failover switching.
https://www.iconnectivity.com/playaudio12

Of course, if the box fails…

then you need two boxes, each of which will have two computers attached — hey — the show must go on, right?