Is it possible to map note on/off messages from a single midi channel to multiple destination channels? For example, duplicate the note on/off messages from a midi controller transmitting on channel 1 to channels 9-16. This functionality is needed for the Yamaha Montage which hard codes the midi receive channel for each part. Sorry for my ignorance.

You want to duplicate MIDI not messages received on MIDI in channel 1 to MIDI out channels 9 to 16 ??? And this is needed by the Montage ??? Well…

You can use one MIDI in block linked to several MIDI out blocks each redirecting the received MIDI in messages to a specific channel. In the following picture, I filtered out MIDI messages from all channels but kept those received from channel 1. You can also decide to filter out other MIDI events to keep only note on/off messages, it is up to you. Of course the MIDI out blocks are instances of the same MIDI out connected to you Montage, but with another channel redirection and the “Map all incoming MIDI to this channel” option checked. 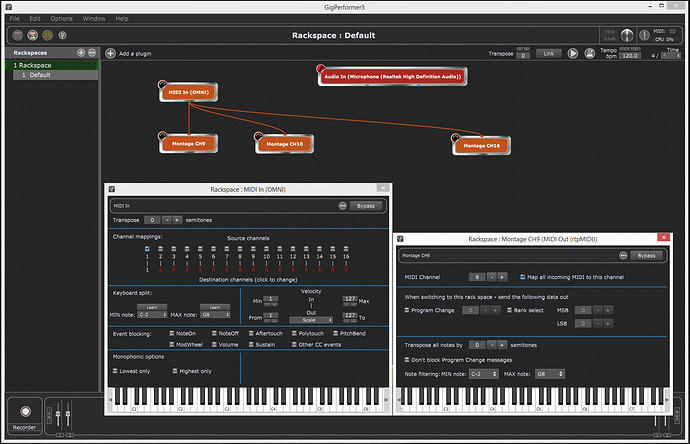 I know somebody who had a better idea to do this in a different way, but we need to wait for a new GP version for this (@jazzundso

However it’s really a shame that Montage doesn’t allow to change the MIDI input channel per part. I see people complaining about that for years everyday…

I tested the Montage at the Musik Messe in Frankfurt, and was not comfortable with it for many reasons, while I falled immediatly in love with the Korg Kronos even if it is an older Keyboard. So I have little chance of being confronted with the weaknesses of the Montage in a near future, but I empathise with their users.

I agree, totally. I have the feeling that the Korg Kronos is superior in almost every aspect (MIDI routing, splitting/layering/scenes/live mode/sound engines/sequencer…). And to be honest, the main reason why I don’t have one is the weight! (14 kg / 30 lb) And one of the few advantages of the Montage is that there’s now is the MODX which has a surprisingly complete feature set (and the sounds are the same) and it weights less than the half! (Montage 6 = 15 kg / 33 lb, MODX 6 = 6 kg / 13 lb)

The Kronos 88 is 24kg, but even if my back doesn’t like it, I love massive heavy boards

Thanks to all for the help! I bought the MODX7 to replace my aging ES7 because it is much lighter and to improve sound quality. While it weighs a lot less, I am somewhat disappointed with its sound engine and midi implementation. Glad I bought Gig Performer.